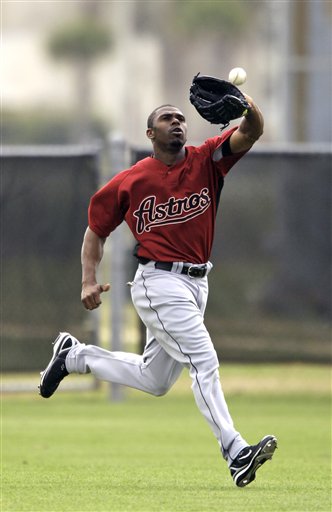 Its a given that we’re not going to see any power out of Bourn. Even in the minors his triples approached the his number of doubles. And just flat out forget about more than five or six home runs. He did pinch run quite a bit in 2007 but the 29 runs in under 150 PA is a big deal. Giving him 700 PA at that rate would equal 233 runs scored. Ok, nothing even close but I could see 120 out of Bourn. While the K’s exist Bourn is still able to work in his walks. This is a huge difference between Bourn and Pierre. Juan Pierre doesn’t walk. He slaps at the ball whenever he can, making fielders luck a big factor.

Pierre typically walks in only 5% of his plate appearances. Bourn walked above the MLB average last season, in 10% of PA. In his minor league career he had a PA rate of a little over 14%.

Moving onto the stolen base, which is really the only reason anyone would draft either one of these players.

Many compare these players due to their lack of power. But the big difference between the two is in their plate approach and in the stolen base percentage category. Granted that Bourn has more value in a fantasy league that includes OBP instead of AVG, yet you can easily draft Bourn 5+ rounds after Pierre is off the board.