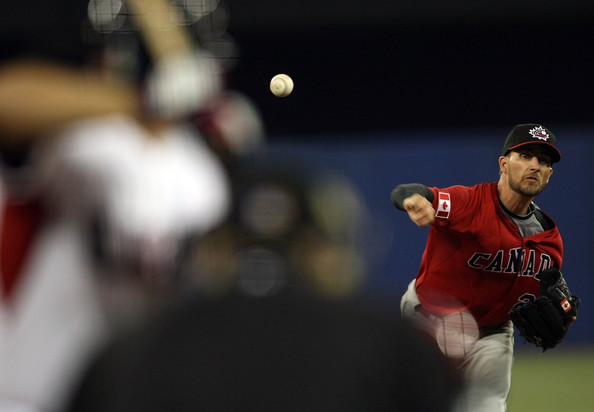 Former Montreal Expos’ RHP Mike Johnson from Sherwood Park, Alta. was released by SK Wyverns in South Korea yesterday. Johnson started for Team Canada against Team USA in the WBC and left a pseudo-hero despite trailing 4-3. Johnson was released by Wyverns after facing only nine hitters.

I witnessed Mike Johnson’s start in person and was not impressed by his stuff.  Though he was crafty and full of guile, his fastball topped out at 85mph rarely and was as straight as an arrow.  I believe he was able to stay in the game due to the surprise factor of the Americans not having seen him before and the fact that it was early on and the hitters’ timing was not yet where it needed to be.

Mike went an incredible 20-2 in Taiwan last year, earning the league’s MVP award. That kind of record is impressive in any league and Mike brings MLB experience to the table. He pitched just twice this year for the SK Wyverns, both appearances coming in long relief.

CJ Nitkowski, former journeyman MLB reliever, is/was Mike Johnson’s teammate for SK Wyverns and provides insight into the differences in the Asian game from the North American game on his blog.

One of things you learn quickly as a foreign baseball player playing in Asia is the unusually fast manner in which decisions are made about you. I experienced it in Japan and initially grew frustrated by it. It was so difficult to earn the trust of your manager regardless of the overall body of work or your track record.

I remember my first season in Fukuoka playing for the Hawks. I was a lefty specialist, which meant the bulk of my job was to keep the better left handed hitters in the league off base in important situations. I was having a particularly good run over the previous 3 months where I had allowed no hits to lefties. I entered a game with the bases loaded and no outs when I hit the lefty batter I faced with a fastball which tied the game. To make it worse it was a pitch I tried to shake off but the catcher would not allow me to, an obvious sign that someone on the bench wanted me to throw that pitch.

After the game I was sent to the minor leagues for about 10 days. The message was clear, you cannot build up trust with your team, they’ll make a move no matter what. I finished that season leading all left handed relievers in both leagues with a .140 batting average against lefties and a respectable ERA in the low 3.00’s. Even with those numbers it wasn’t clear that I would be returning. This is Asian baseball.

Despite being released, I expect Johnson to catch on with another team. One year removed from an MVP calibre season is still an impressive credential, perhaps he will catch on with a team in Taiwan yet again.