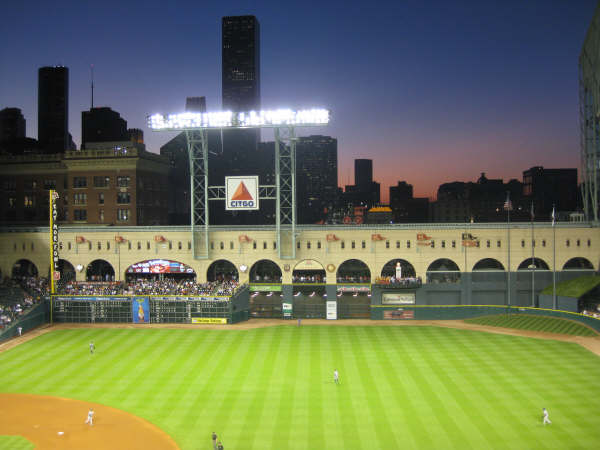 Frequent commenter Tight PP recently took a road trip to Houston to see the Astros play in Minute Maid park.  Pinch-hitting today for Mop Up Duty, you will find his review below.

I found myself in south Texas during Opening Week so I figured pop byy Houston for some NL baseball.

All I knew about MMP was what I had seen on MLB the Show for PS2. But it may now be the nicest park I have been to.

It is located on the edge of downtown – walking distance to hotels, restaurants, bars and the city transit train (like the one in Calgary). We walked a few blocks to Main St which is were the train runs and there are bars. Stopped at the Flying Saucer, a bar with about 300 beers, mostly American craft beers that taste like barf and oranges.  From the quick look I had at the city it was very clean, and looked like it has a lot of money.  No falling down skyscrapers like Cleveland and Detroit.  Even caught an old blues man working a street corner.

We headed back to the Park around 6pm, and entered through Union Station. It looks like the area was once a train yard, and that has been put into the stadium with the Home Run Train, and names of the things in the park. 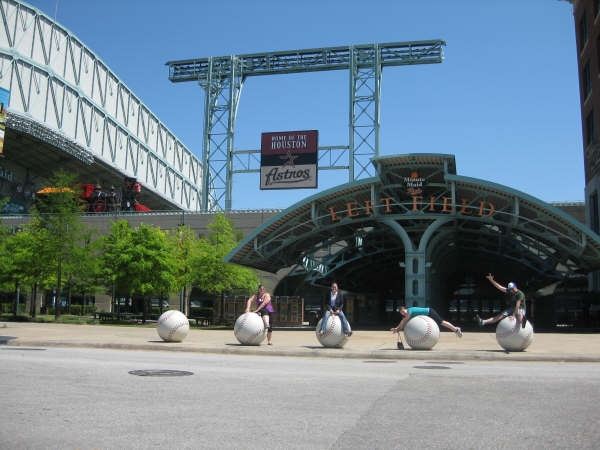 The concession stands have names like “Dining Car Grill” and “Union Station Favourites”. They mostly serve standard ball park fare, however there is a South/Texas touch with pulled pork, BBQ, fried chicken, Mexican and Margaritas etc. I did not try any so cannot make a comment on quality. The concourses are wide, bright, and they look nice.

Before the game we could head down to field level and try to get autographs with no hassle, even with upper deck tickets. Then wandered out to the outfield walkway in left field. The arches that support the retractable roof also allow fans to stand above the homerun line.  Not only the roof moves, like at Skydome, but also the Left field wall.  So when the roof is open it is not like you are sitting in a toilet bowl with the lid up, it is more like an open air stadium.

Our seats were in 2nd row of the upper deck above 1st base. $22 a seat and a great sight line. With the roof open you could look over the left field wall and see down town Houston.

The only downside to the park is the scoreboards. There is a video board in high centre field (which was somewhat damaged). Towards right field is 2 more scoreboards one which has the line ups and the other has ads. The bad thing is they are 1970’s style light bulb scoreboards. There was no replays and very little info given. Skydome gives so much more info on their banner boards. The out of town scoreboard is a hand flipped style in the left field wall. 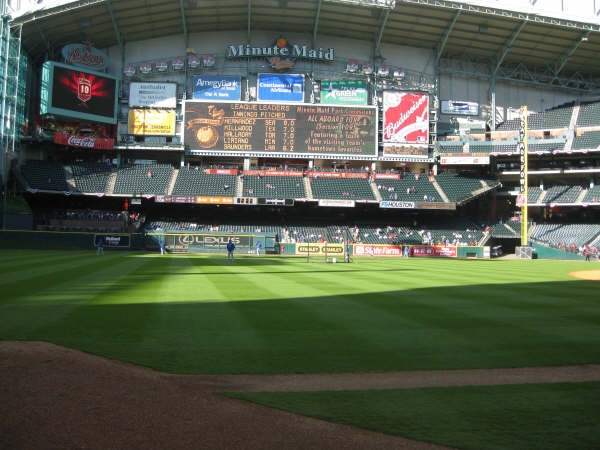 This is one of the nicest park I have ever seen. It had great sight lines, was comfortable, nice to look at, great location, it is amazing how far retractable domes have come. I highly recommend it.  Its also nice to see a stadium that isn’t being fake retro.  I would like to see the domes in Arizona, Milwaukee and Seattle to see how the other new generation retractable roofs compare.

Also we had a presidential sighting, as Former President George Bush Sr, and Barbra Bush were put on the “Kiss Cam” as they sat behind home plate.  Quick Peck. 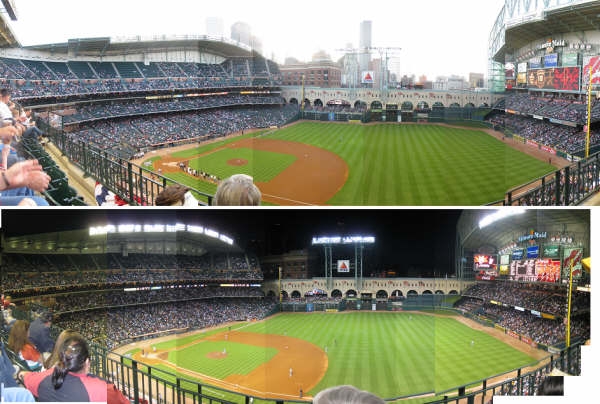