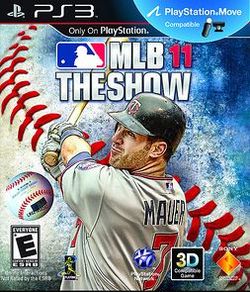 The Show has finally adopted full analog controls. The overall layout is simpler than MLB 2K’s version. In MLB 2K off-speed pitches such as curves require two-three full movements of the stick, often in circular fashions. A curve in the show starts with a down movement, followed by an angled up movement (depending on pitch location).

Personally, I prefer The Show’s pitching mechanics, although I am notoriously bad at gaming. Hardcore gamers may prefer 2K’s controls.

Hitting can also be performed with the analog stick. It’s a bit tricky. Pull back on the stick for a batters stride, then forward and angled towards the pitch. The stride is a bit unrealistic, as it can be difficult to repeat on a pitch to pitch basis.

Of course, if analog isn’t your thing, you can revert to older button controls or the classic Show controls.

The commentary is, to my ears, largely unchanged from past versions, even dating back to the PS2 series. Matt Vasgersian and Dave Campbell return yet again. The new addition, Eric Karros, is, as in real life, annoying as possible.

In-game scouting charts, stats such as pitch locations and the usual suspects are all present. A simple press up the old school up button will bring up a quick menu that includes much of this data. 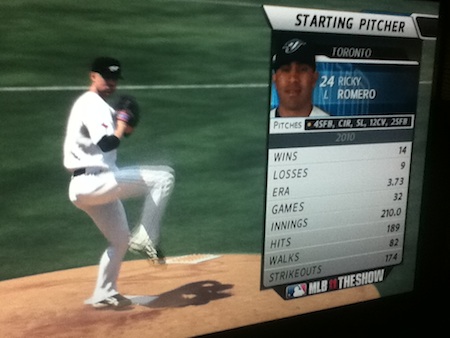 Multiple seasons can be played within this mode. This is basically franchise without the sim aspects.

Variable season lengths can be selected, from as few as 14 games. Transactions, roster management, etc are all available during the season. It plays as a season should and is a solid feature.

Franchise is a mixed bag. It appears to be set up primarily for simulation fans, although it can be played through. The franchise includes roster management, budgeting, promotions, stadium upgrades, purchasing training + rehab facilities, selecting advertisers, etc.

From a pure sim standpoint computer based simulations such as Out of the Park Baseball & Baseball Mogul do a much better job.

If you’re playing through the franchise you can have the computer take care of the finances, leaving you free to focus on the gameplay. However, all seasons are set at 162 games in Franchise.

Road to the Show 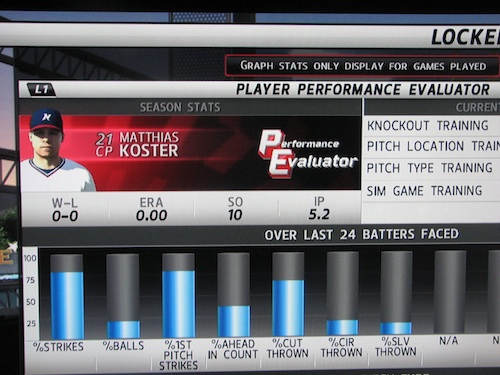 The perennial favourite is back. Create your player (any position), select his look (an array of options), dish out attribute points and start a career. Complete various training tasks & in game & season goals to earn more attribute points and ultimately earn a promotion to the bigs. The big change this time around is in game point layout. For example (as a pitcher), a three pitch strikeout is worth 21 points, a six pitch strikeout is worth 17 points, a groundout is worth 10. Allowing a single is -1, etc etc. This makes every PA of consequence.

Increased success & attributes will bring about awards, increased contract sizes, more choice during free agency and a shot at Cooperstown. A great mixture of sim & gaming.

Play in a series of games against an opponent (usually human). From 16 games up to 83.

This is the only mode uses Playstation Move. As I don’t have ‘Move’, it plays as a regular video game style HR Derby.

Challenge of the Week 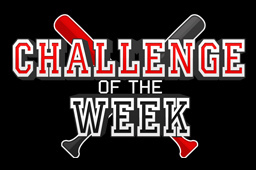 A cool feature that increases the shelf life of the game. Each week Sony uploads a specific challenge. Download and play the challenge, acquiring points based upon your success at the challenge. Leaderboards for each task & a seasonal running tally exist.

The online community already has a strong presence, even on the first day of release. Gain XP (experience) points for winning and even losing games online. Create and/or join leagues for a more in-depth gaming experience.

Downloadable content on this disc is a bit disappointing. Madden like ‘boosts’ are available for purchase, such as training points, injury recovery, etc. Classic stadiums can also be purchased in a block of 6 (Shibe, Polo Grounds, etc) for $5. Finally, sabermetrical stats (runs created, etc) can be added on for $1. Personally, I’m not a big fan of dishing out coin, no matter what the cost, for something that should already be included on the disc.

I recently picked up a $5 copy of MLB 09. Outside of analog & a few tweaks to the Road to the Show feature, I don’t see enough of a change from 11 to 09 to warrant a purchase for the casual gamer that likes to pick up and play a game from time to time.

However, if you’re into online vs gaming & challenges, having fresh rosters or you’re a fan of Road To the Show, MLB 11 The Show is worth the purchase price.