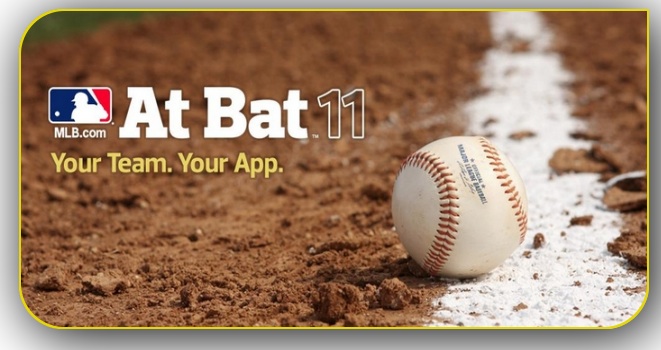 MLB At Bat 11 recently hit the Apple App Store. Here are some initial app thoughts.Note #1: This is an in-progress review, as multiple app features aren’t available during spring training.

Note #2: The Iphone & Android App are nearly identical in features. The Blackberry app is a stripped-down version that does not offer live video feeds.

Note #3: All images are from mlb.com marketing materials. They are representative of how the app actually looks.

Upon installation and start-up, the app asks for a list of favourite teams. I selected three or four and was on my way. My first team (Jays) loads on the home screen whenever I turn on the app. The following official screen cap showcases the Red Sox team page. 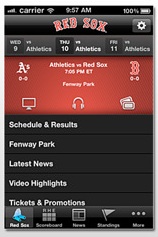 As the image shows, the team name resides at the top and a selectable three game timeframe is directly below.

Box Scores are presented for each game. Clicking on the TV will bring up a live video feeds or an archive for those with MLB.TV subscriptions (note: archives are not available in-app during spring training). Obviously the headphones represent live audio and the ticket stubs will allow users to buy tickets via MLB.com.

For those without MLB.TV subs, action can be followed via MLB Gameday or an everyday box score. Players names can be clicked on for player stats, info and some rudimentary splits. 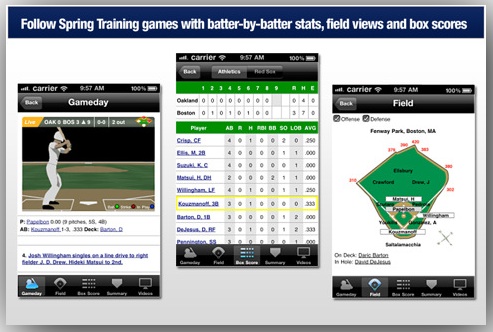 Other options on the team screen include video highlights (including condensed games), team news via MLB.com reporters, full season schedules, roster info, and access to teams official websites (which are readable within the app). 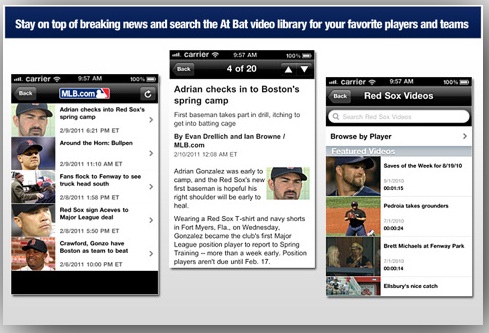 Live video & audio for all teams can be found via the scoreboard window. News for the entire league can also be found within the app, as shown above. Video packages, text stories and sortable player highlights are all included within the app.

Other app features include standings, team specific tweets, a nice ‘At the Ballpark’ feature that includes directions & facebook & twitter integration.

Seeing as the app is in spring mode, I’m crossing my fingers for the following regular season features:

The app currently offers free spring training live video feeds. But outside of that feature, the app is in a holding pattern until the regular season.