Moises Sierra, a RF prospect in the Jays minor league system is my sleeper pick to click.  Here’s a little more about the underrated (in my opinion) Dominican player.

Moises Sierra was born September 24, 1988 in Santo Domingo, Dominican Republic.  The 6’0″ 225lbs. Sierra bats right, throws right and….. plays right field.  He was signed as a non-drafted free agent by the Toronto Blue Jays on December 20, 2005 (along with Johermyn Chavez) as a 17 year old.  It was apparent that the Blue Jays viewed Sierra as a special player because, under the JP Ricciardi regime, the organization was loathe to look outside of the draft when signing players.  Sierra was assigned to the Dominican Summer League and posted a line of .253/.345/.376  while swiping 17 bags in 69 games.

The following season Sierra was assigned to the Blue Jays Gulf Coast League affiliate.  In his first professional season in North America, Sierra struggled (to get a sense of what the culture shock Sierra experienced is like, make sure to see the film Sugar).  Regardless, Blue Jays talent evaluaters saw enough fundamental skills in Sierra to promote him to low-A level Lansing in 2008.  They were right to do so:  Sierra hit .310 for the month of April, proving he wasn’t intimidated by the quick promotion.  After all was said and done,  Sierra posted a mediocre .246/.297/.364 slash line, yet respectable considering his quick rise through the system.  It was here in Lansing that Sierra served notice to the Midwest League that he possessed an absolute cannon of an arm.  Sierra racked up 11 OF assists.  Scouts who saw him play remarked that he had the best arm of any player in any level of the minor leagues.

“He’s probably got one of the best throwing arms in all of baseball,” said Dick Scott, Toronto’s director of player development. “He’s got a very good arm. It’s a plus-plus arm. He can really throw. He winds up and lets it rip every time though, so we have to make sure he’s getting it to the cutoff man or throwing to the right base.

“He’ll get all that through playing time though. We’ve had to quicken his release a little bit, but he’s figuring it out. He’s made a lot of progress this year, offensively and defensively.”

The Blue Jays chose to promote him aggressively again in 2009, this time assigning him to High-A Dunedin Blue Jays of the Florida State League.  After 2 years of playing ball professionally in North America, this is where Sierra began to flourish. 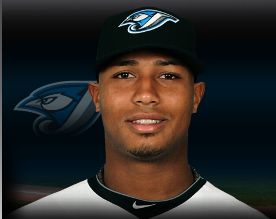 Sierra improved almost every facet of his offensive game, most importantly his eye at the plate.  He walked more and struck out less, all the while posting a .286/.360/.393 line for an OPS of .753.  He crushed left-handed pitching and was named the organizational player of the month for June.  After being caught stealing almost 50% of the time the previous year, Sierra stepped up his running game by stealing 10 bases in only 12 attempts.  He served notice to opposing teams that his cannon of an arm was for real.  Sierra cut down 15 runners trying to advance while conjuring up old memories of Jesse Barfield and Raul Mondesi’s powerful and accurate throws from right field.

The only facet of Sierra’s game that was lacking was home run power.  As scouts often say, power is the last tool to develop. (source)  Sierra hit a combined 6HR between the 2 levels in 495 plate appearances.  Named an all-star that season, Sierra was rewarded a late-season promotion to AA New Hampshire. 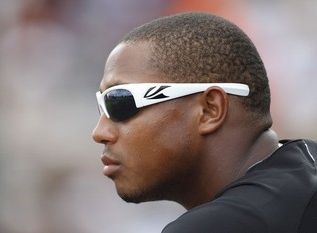 The following season was a major disappointment for Sierra.  During the offseason Moises suffered a stress fracture in his leg and missed the first 67 games of the season.  He returned to rehab in the Blue Jays’ affiliate of the Gulf Coast League.  5 games into his rehab,  Sierra was hit in the wrist by a fastball, fracturing his hamate bone.  He missed the next 52 games and came back late in the season for a handful of games in Dunedin.

Essentially, Sierra wasted an entire year of development.  Because of this fact, I liken him to current Jays outfielder Eric Thames.  The 24-year old Thames was considered by many to be “too old” to be a prospect, however, he missed almost 2 full seasons due to a quadriceps injury.  (source) Thought to be an “org guy”,  since arriving in Toronto as a callup this season, Thames has proven he can contribute at the major-league level.  The 22 year old Sierra’s estimated time of arrival in Toronto may be delayed like Thames’ was, but it is only because of the loss of development time that Sierra’s status as a legitimate prospect has unfairly slipped.  He’s not ranked in the Jays top #10 in any of the prospect rankings I could find, and is ranked within the top 20 (#18 was the highest I saw) in only a handful.  This is why I consider Sierra to be a “sleeper” pick to click.

Following spring training with the “big club” this year, Sierra was assigned to AA New Hampshire.  He seems to have found his power stroke, hitting 10 HR to go with a .478 slugging percentage.  Sierra’s two-strike approach has improved significantly as has his ability to hit off-speed pitches.  The fact that the Jays protected Sierra by adding him to the 40-man roster is a clear sign that he is very much in their plans foing forward.  If Sierra continues to perform at his current level it is probable that he will see time with the AAA Las Vegas 51s later this season.

“I think he’ll be a 15- to 20-homer guy,” Scott said. “He’s strong and the ball just jumps off his bat. He has power to right field right now. He kind of reminds me of a young Raul Mondesi with his body style. I remember seeing Raul when he was a young farmhand with the Dodgers and Moises is the same way; he’s athletic and he can do a lot of things.”

While promoted aggressively throughout his short professional career, Moises Sierra has performed and improved his game at every level.  I see no reason why that trend should not continue to AAA and beyond.  Sierra should join the Toronto Blue Jays in late 2012 or even earlier if all goes as planned.  I expect him to be an impact bat in RF for years to come.

Moises Sierra (#74) bats in an exhibition game in spring training vs. Team Canada in 2011 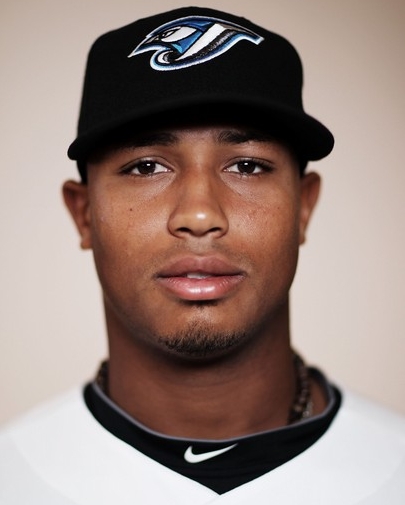