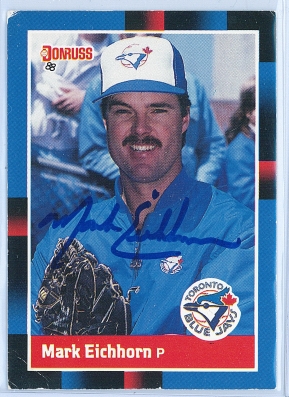 First there was Tom Henke, then there was Duane Ward.  To complete the trifecta of mini bios of 1980’s Blue Jays relievers, we need to examine Mark Eichhorn.

Mark Eichhorn originally made his major league debut for the Toronto Blue Jays in 1982 but a severe shoulder injury forced him back to the minors.  Having lost most of the velocity on his fastball, Eichhorn reconstructed his delivery in the Florida Instructional League.  He dropped his arm angle to a sidearm and sometimes submarine level, where his release point was below his belt.

In 1986 Eichhorn would return to the Blue Jays after 4 more seasons in the minors.  This is when my 6 year old self really took notice.  I was fascinated with the grace of his unusual delivery and how right handed hitters flailed helplessly at his offerings.

His rookie season was spectacular, posting an ERA+ of 249 with 14 wins in relief, a franchise record for rookie wins. He pitched 157 innings that year, which would be impressive numbers for a rookie starter by today’s standards, but as I said before they were all in relief.  Despite having one of the slowest fastballs in the majors, his precision control, deceptive delivery and movement on his fastball allowed him to strike out 166.  His WHIP was also a sparking 0.95.

Interestingly enough, Eichhorn failed to qualify for the ERA title by 5 innings. Given the option by then-manager Jimy Williams to start the final few games of the season in order to rack up enough innings to qualify, Eichhorn respectfully declined.  He wanted to do it the right way and to not “slip in the back door.” 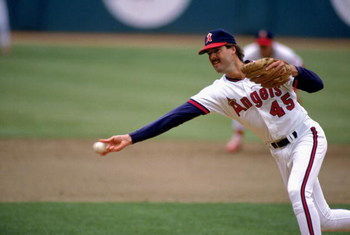 Following his tenure in Toronto, Eichhorn went on to play for the Braves and the Angels, before coming back home to Toronto to win a World Series in 1992.  He holds the franchise record for most games in a single-season with 89. 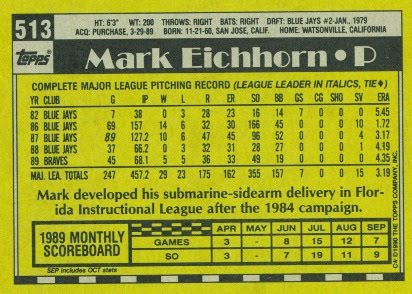