Like the Forgotten Former Toronto Blue Jays post this week,  there’s a few interesting players of note that are plying their trade in the Japanese league known as Nippon Professional Baseball.  Though there’s not many former Blue Jays, there’s still a few interesting stories.  Let’s take a look, shall we?

Former Blue Jay reliever Brian Wolfe enters his 3rd season in Japan, pitching for the Hokkaido Nippon-Ham Fighters.  You may recall that the Blue Jays acquired Wolfe from the Milwaukee Brewers in exchange for the Real Canadian Hero Corey Koskie.  Wolfe quickly endeared himself to Jays fans, pitching a stellar 22 innings of relief before letting his true self show the following season to the tune of an 8.22 ERA.  Subsequently he was released and he packed his bags for Japan.

Converted from a reliever to a starter in his 2nd season, Wolfe has put up respectable numbers in the NPB.  Last season he pitched 150 innings with a 3.60 ERA and 3:1 K:BB ratio.  This year he’s off to a great start: In 5 starts, Wolfe has a 1.59 ERA.  It looks like he’s found a comfortable home in Japan. 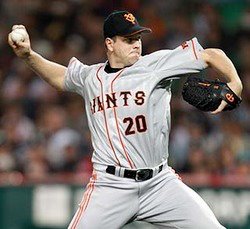 I wrote about Scott Mathieson a while back when I previewed what Team Canada’s roster might look like for the 2013 World Baseball Classic. At the time he was preparing himself for a run at a spot in the Phillies’ bullpen.  Instead, the Phillies released him so that he could join the Yomiuri Giants as their closer.

So far he’s been lights out.  In 9 innings pitched, Mathieson has struck out 11, walked only 3 and has not allowed a single run to cross the plate.  It’s a small sample size to be sure, but it is encouraging nonetheless to see that Mathieson has found some of the command that seemed to elude him in the minor leagues.  This is great news for Team Canada as well, since Mathieson’s international experience will be of value should Canada meet up with the Japanese team in the 2013 World Baseball Classic.

We saw Wily Mo Pena last year as a late-season pick up to provide the Arizona Diamondbacks with some power during their playoff run.  As far as power was concerned, the D-Backs couldn’t be more pleased:  in only 46 at-bats, Pena hit 5 home runs and slugged.522.

The only problem was that he struck out in approximately 50% of his at-bats and he didn’t draw a single walk.  His on-base percentage was a miniscule .196.  Sorry Wily Mo, you don’t have to go home but you can’t stay here.

Wily Mo didn’t go home – instead he chose to go to Japan to get PAID.  He’s had much better success this season playing for the Fukuoka SoftBank Hawks. In 110 at-bats, Pena has mashed 7 home runs, but more impressively, he’s walked 11 times.  His strikeout rate is still high (31) but he’s hitting at a .309 clip.  It looks like Pena has found a fit for his skillset in the NPB.

After posting a -1.5 WAR in Detroit last season, Brad Penny thought the best move for his career would be to snowball in Japan instead of get in shape and give the Tigers some sort of return on their $3 million investment.

Penny signed a contract with the Fukuoka SoftBank Hawks for $4 million plus an additional $3.5 in performance bonuses.  Penny would never reach those performance bonuses because he was released after one start.  In that start, Penny pitched 3.1 innings and gave up 6 runs, 7 hits and walked 3 in only 64 pitches.  To add insult to injury, Penny’s fiancee dumped him shortly after.  At least he’ll always have the memories of frolicking with her on the beach.

Bryan Bullington is a former 1st round, 1st pick of the PIttsburgh Pirates in the 2002 draft.  Like many before and after him, Bullington flamed out.  To be fair to Bullington, he didn’t have terrible stuff (see below) but he might have succumbed to all the pressure of being a #1 pick.  It happens.

Instead of spending another year in the minors, Bullington opted for a fresh start in Japan for the 2011 season and it paid off handsomely for him.  The NPB is a league tailor-made for Bullington’s skillset, and he thrived in this dramatically different environment.  In his first year in Japan, pitching for the Hiroshima Carp, Bullington posted a 13-11 record – but more importantly pitched 204 innings with a 2.42 ERA.  He’s posting similar numbers this year, striking out 28 hitters in 37 innings and sporting a sparkling 2.19 ERA.  It’s nice to see that the NPB can play the role of a refuge for misfit Major Leaguers.

Hideki Okajima was a lefthanded reliever who was dominant in his first two seasons for the Boston Red Sox, mostly because he freaked hitters out with his unorthodox delivery. 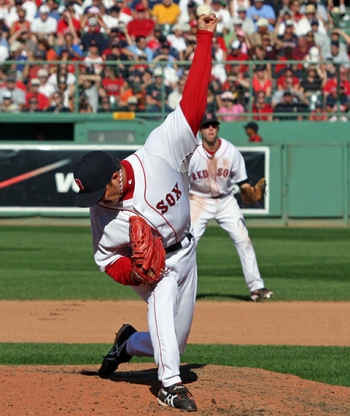 When Okajima pitched the ball to the plate, instead of looking at his catcher’s target, Hideki would be looking at the ground.

Eventually the novelty wore off and hitters began hitting line drives on pitches they normally would have whiffed on.  This season, Okajima has pitched 9 innings for the Fukuoka SoftBank Hawks with 7 strikeouts, 3 walks, 8 hits allowed and 0 earned runs.  Small sample size for Okajima, but so far so good.

Kenji Jojima was a superstar catcher and 7-time All Star for the Fukuoka Daiei Hawks in his 11 NPB seasons before signing with the Seattle Mariners in 2006.  Jojima acclimated himself well, finishing 4th in rookie of the year voting behind Justin Verlander, Jonathan Papelbon and Francisco Liriano.  He even hit a home run in his first two major league games.

Despite throwing out 40% of would be-base stealers, having stellar game-calling skills behind the plate and averaging a .721 OPS over his career, Jojima lost playing time to Rob Johnson, Guillermo Quiroz and Adam Moore.  Jojima opted out of his contract in order to return to Japan.

Upon his return to Japan, Johjima returned to his All-Star calibre level of play. In 144 games, Johjima hit 28 home runs, and hit .303.  Since then, Johjima has floundered.  In an injury-limiting 2011 campagin, Johjima was only able to appear in 38 games while hitting a paltry .189.  It’s much of the same for Johjima this season, as he’s hitting at a .184 clip over 23 games.  This might be the end of the line for the 36-year old catcher.

In 2006, Akinori Iwamura opted to be posted by his team, the Yakult Swallows.  The Tampa Bay Rays won the right to negotiate with Iwamura after having submitted a $4.5 million bid.  He then signed a three-year contract with the Rays worth $7.7 million, with a club option for a fourth year at $4.25 million

A third baseman during his time with Yakult, the Rays shuffled him between 3B and 2B before deciding to give him the 3B job outright and batting him in the leadoff position.  Most notably, Iwamura was known for using a baseball glove made of Crocodile skin.

With the emergence of stud-in-waiting Evan Longoria, Iwamura moved to 2B and transitioned to the new position seamlessly.    Iwamura had a great season in the leadoff spot, scoring 91 runs and posting a 2.4 WAR.  It all fell apart in 2009, however, as a hard slide from Chris Coghlan resulted in a torn ACL that would require surgery and “involvement” on the MCL  In addition, ligaments in his ankle were torn, causing him to miss the remainder of the season and put his career in jeopardy. 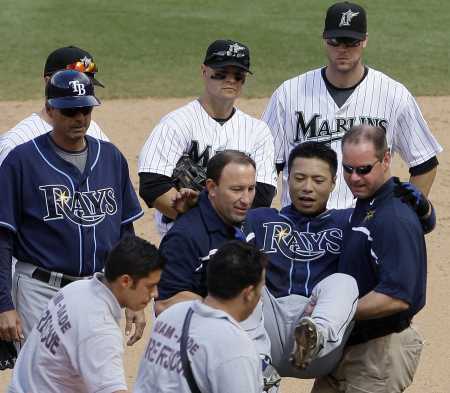 The Rays declined his $4.5 million option for 2010 and he went on to play handful of games below-league-average production for Oakland and Pittsburgh.

Iwamura signed with the Tohoku Rakuten Golden Eagles to try and get the magic back, but it seems as though Aki’s best days are behind him.  In 77 games, Iwamura hit .183 with absolutely no power to speak of.  No word on how his defense played out, but I have to assume he lost a step (or more) after going through reconstructive knee surgery.

This player may be of interest to noone but me, however, I was impressed with Giancarlo Alvarado when I was in Puerto Rico this past winter to see the Puerto Rican Winter League. The Santurce, Puerto Rico native led the league in all pitching categories and actually had decent minor league numbers despite never getting a sniff of the Majors.

In Japan he’s been lights out, and this season is no exception.  He’s only allowed 4 runs in 23 innings for a 1.57 ERA while striking out 22.  Alvarado is most likely a victim of the curse of the AAAA player, much like many of the players profiled in the Forgotten Former Toronto Blue Jays post.  Here he is getting taken yard by Jose Julio Ruiz when I was in Puerto Rico: