O-Dog hits for the Cycle 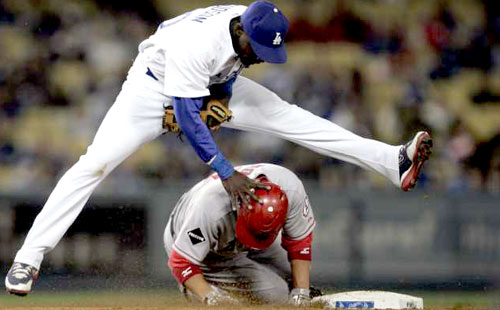 Tonight I tuned in just as Orlando Hudson hit his cycle making triple off of the San Fran Giants. Believe it or not this is the first cycle ever hit by a Dodger at Dodger Stadium. And it only took the O-Dog six innings! I can’t recall ever hearing of a six inning cycle.

A lot has been said in the baseball media about Hudson’s skills declining in the past year or so, mostly on the defensive side of the ball. To be fair his defensive ‘saber stats’ have been poor since he left Toronto. On the offensive side of the ball his OPS stayed at .817 in both 2007 & 2008. To contrast this Aaron Hill’s career high is .792. I’m not pitting Hudson vs Hill because at this point I’d rather have Hill, I’m just using these stats as a comparison.

This off-season Hudson was a victim of the weak economy (or most likely owner collusion) that kept free agent salaries down (save for the big two or three signings). The O-Dog was only able to sign for $3.4 million guaranteed, although he can earn up to an additional $6.4 million in performance bonuses.

Congrats to Orlando Hudson on his cycle.

One thing that jumps out at me from Hudson’s 2009 stat line is the number of steals. In 2008 he stole only 4 bases. In 2009 he’s already swiped 3 bags. Fantasy owners should keep tabs on his SB total for the rest of the month. He might be a sleeper pick to steal double digits.