Today the ownership of Ottawa’s newest Intercounty Baseball League (IBL) franchise unveiled their name today: The Fat Cats.  The team name is meant as a gentle poke at Ottawa’s reputation as a place where government jobs protect the city’s economy.  General Manager Duncan MacDonald stated that one name stood out from a group of 10 shortlisted finalists.

“When Fat Cats was on there, they just started to laugh,” MacDonald said Wednesday at City Hall, where the team unveiled the name, logo and ticket pricing.

The team will play all 18 games at Ottawa Stadium (formerly JetForm Park – home of the now-defunct Ottawa Lynx), with their season home opener behing held May 15th versus Mississauga. The composition of the team is yet to be determined.  As of today there are no roster commitments.

The team has secured a manager, however.  Bill Mackenzie was named the skipper just last week.  Mackenzie is a former catcher for the Detroit Tigers & Montreal Expos, having played in the mid 1960’s.  After a career ending arm injury, Mackenzie moved into scouting and is responsible for signing such stars as Larry Walker, Matt Stairs and Tim Raines. 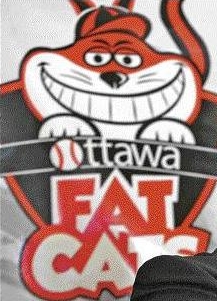 Ottawa has struggled with baseball franchises in the past, with both the Ottawa Lynx and Ottawa Rapidz having folded due to lack of attendance. That’s not to say a baseball fan base does not exist in Ottawa – in its inaugural year, the Ottawa Lynx broke a 47-year-old league attendance record of 693,000.  They were also a significant economic contributor to the Capital Region for more than a decade.

“People will come,” said a confident MacDonald, who also heads the Ottawa Stadium Group, the organization behind the team. “We understand this is a follow-the-leader sort of town so we’ve just got to get the first few people through the turnstiles, and once … people are having fun, we think the corporate side will support it.

Parking has long been a nightmare at Ottawa Stadium, contributing to attendance woes.  With only 800 spots (that fill up quickly) on site, the closest parking is over a kilometre away.  To combat this challenge,  every ticket purchase comes with two-way transportation on OC Transpo anywhere in the city to and from the St. Laurent transit station, plus a shuttle to and from the game.

One of the catches to having Ottawa join the IBL is that the team is required to pay for all visiting team travelling costs as well as their own.  All of the other teams in the IBL are clustered in central and southwestern Ontario and do not require overnight stays for away games.

Some of you might notice the typical red/black/white colouring of the logo.  I think it would be nice if an Ottawa team strayed from this colour scheme for once, but this is meant to pay homage to Ottawa’s “rich sporting tradition.”  Nearly a century ago, the Ottawa Senators baseball team wore the same colours when they competed in the long-defunct Canadian League.

Ticket pricing has been designed to fill the stands – ranging from $6 to $12.  If nothing else, the Ottawa Fat Cats will be playing in a beautiful park and that would attract me to the games at the very least.  But if attendance lags, famed Canadian author WP Kinsella has a theory as to why:

It’s a game of patience, he says, and we’re living in impatient times.

“Twenty years ago, I was typing my novels on a typewriter … (now) I get really impatient if the internet doesn’t connect in five seconds,” Kinsella said.

“You absolutely don’t need to think at a basketball game and not much at a hockey game, either. But baseball is a game of anticipation. There are always hundreds of permutations and combinations about what might happen next. It’s always about anticipation.

The IBL is Canada’s oldest baseball league, having been in existence for more than 90 years.