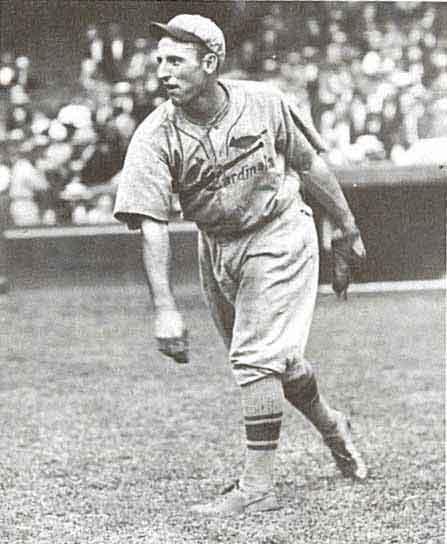 On the way to a Jays game a week or so ago, Daperman and myself were having a discussion on the “Baseball Names” article that I wrote and brought up a few names that I had left out. Daperman told me about Johnny Leonard Roosevelt Martin, a man with two nicknames. He was commonly known as Pepper Martin, but he was also known as the “Wild Horse of the Osage”. That nickname was branded into my brain and a few days later I investigated this Wild Horse.

Pepper Martin was born on Monday, February 29, 1904, in Temple, Oklahoma. Martin was 24 years old when he broke into the big leagues on April 16, 1928, with the St. Louis Cardinals. He played thirdbase and was an Outfielder for the “Gashouse Gang” – The St. Louis Cardinals in the 1930’s. I am not going to bore you with his stats, which were above average, or what his value is over a replacement player (I don’t care) or his Win Shares, because it doesn’t matter. Not even his Runs Created Above Average. What matters is that he was a colourful player who was a menace on the basepaths.

“A chunky, unshaven hobo who (Pepper Martin) ran the bases like a beserk locomotive, slept in the raw, and swore at pitchers in his sleep.” – Author Lee Allen in The National League Story (1961)”

In the 1931 World Series, Pepper Martin batted .500 and stole 5 bases as the Cardinals defeated the Philadelphia Athletics 4 games to 3. During the series Martin was asked how he had learned to run so fast; he replied “I grew up in Oklahoma, and once you start runnin’ out there there ain’t nothin’ to stop you.”

Pepper has the third highest World Series career batting average ever at .418, and is tied for ninth in stolen bases with seven

As part of the Gashouse Gang, Martin formed the “Mudcat Band”. The Mudcats played before and after games in the clubhouses of the National League and enlisted such members as Fiddler Bill McGee, Bob Weiland on jug, Frenchy Bordagaray on washboard. Martin played guitar. Not only was Pepper a hillbilly music aficianado, he also had a penchant for midget auto racing. 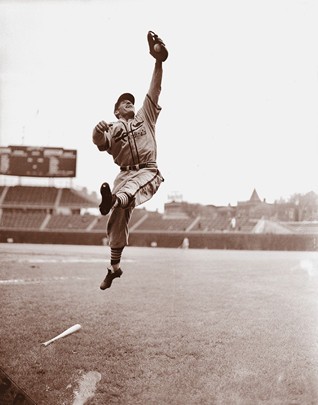 Martin retired at the age of 40 and became a minor league manager. While managing Miami of the International League he was suspended and fined for choking an umpire. When brought before the league chancellor, Pepper was asked if he really intended to harm the umpire. Pepper replied “I meant to kill the buzzard”.

Pepper didn’t like to be called Pepper, so instead teammates called him “Johnny”. 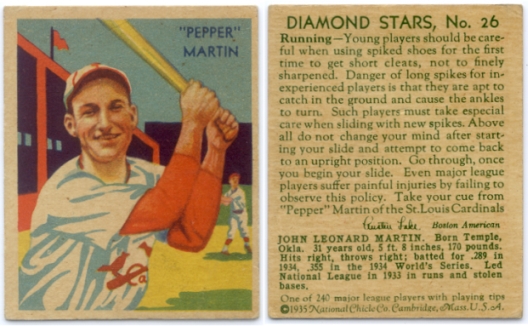