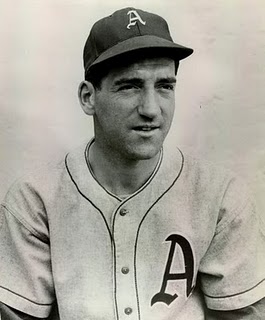 An article today of one of the greatest stories that all of baseball and especially Canadian baseball fans should know.  This is the one of Phil Marchildon, a star with the Philadelphia A’s, a WW2 volunteer and a victim of the infamous Nazi POW Camp Stalag Luft III.

Mr. Marchildon was born in Penetanguishene, Ontario in 1913.  This is a small, predominantly French community on the shores of Georgian Bay about 150km north of Toronto.  He excelled at most sports and it seems he was a crossover player, coming from orthodox fastball into organised baseball in his late teens.  There were many more semi-pro teams in Southern Ontario at that time, much like the Intercounty League today.

Being a crossover pitcher, Mr. Marchildon had a pure sidearm/submarine delievery and used softball pitches such as a ‘riser’ and a ‘dropball’.  Many baseball players could not touch these pitches as they had never seen a pitch rise. Once he became established in baseball he developed a killer curve ball that would have devastated right handed hitters. Sources also point that his fastball had been clocked at 95mph (a fact that is questionable). 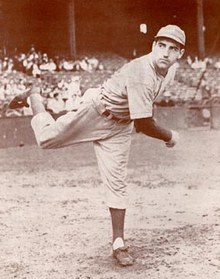 After leading several teams to Ontario championships in the 1930’s Phil was picked up by the Toronto International League club, a AAA minor league team.  He was signed to the AAA club after he impressed pro scouts at a tryout in Barrie, Ontario.  After two great years with the Maple Leafs Phil was signed by Connie Mack and the Philadelphia A’s.  He appeared in 2 games in 1940 as a 28 year old rookie.  Over the 1941 and 1942 season Phil combined for a 27-29 record and an ERA under 4.00.  He was 9th for AL MVP honours in ’42 (before the Cy Young was awarded).  The A’s were a terrible team at this time, they finished in 8th and 10 games behind the 7th place Washington club.

Looking forward to developing into one of the premiere pitchers in the AL and turning around a struggling Philadelphia team Phil’s baseball career would be put on hold as he, like many other sports heros, joined the war effort.  Phil joined the Royal Canadian Air Force and took his aircrew training in Canada and in the United Kingdom.  He was put into a bomber squadron and became a tail-gunner.  He was involved in the airstrike preceeding and on June 6, 1944, D-Day.

Marchildon’s war continued until his bomber was shot down over the English Channel and was rescued/captured by a German partol.  Mr. Marchildon was then sent to the infamous German prison Stalag Luft III, which was made famous by Steve McQueen and Charles Bronson in “The Great Escape“.  If you remember Steve McQueen sported a baseball and a ball glove through most of the movie, I am sure that Mr. Marchildon would have schooled the pretty-boy actor in any prison yard games.

However, unlike the gang from Hollywood, Phil Marchildon stayed in the POW camp until it was liberated by allied forces.  When freed in early 1945 Marchildon had lost almost a third of his body weight.  Nonetheless, the broken and beaten prisoner was able to return to Connie Mack’s A’s by the end of the 1945 season!  It was too late, to help the futile A’s.  The A’s had finished last in 8 of 11 seasons.

Teammates and family members all note the changes in Phil’s personality.  Usually stoic, but still pleasant, the now 32 year old war veteran was depressed, quite, reclusive and rarely showed any emotion.  He suffered crippling night terrors.  Today this would probably be diagnosed as Post-Traumatic-Stress Disorder.  While his demeanor didn’t change he was still a stud on the mound for the still lousy A’s.

Marchildon would eventually retire in 1950.  He pitched in only 41 games after the his stellar 1947 season.  He would retire from baseball and settle in Etobicoke, Ontario.  He was elected into the Canadian Baseball Hall of Fame in 1982.  He would die in 1997 in Toronto at the age of 84. 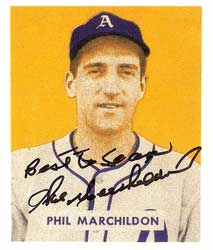