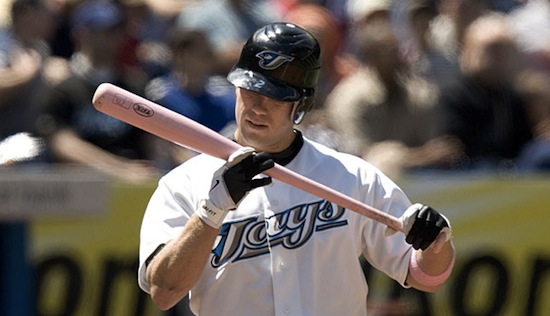 Looking at the Jays propensity to the pop-up.

I like the simple things in life. Take a computer for example. If I have a problem with web coding or doing some semi-advanced spreadsheet work, well it happens. If I click on a program icon to start something up and it hangs, well then I get a bit upset.

I feel same way about watching the Jays bat. If someone strikes out on a good pitch, it happens. DP off of a nice sinker, it happens.

Now hitting MLB pitching in any scenario isn’t easy. Regardless, pop-up after pop-up can drive me crazy. It’s a completely unproductive out. 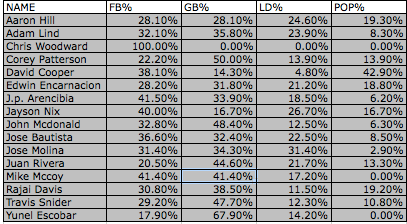 Eight members of the Jays roster have 7 or more pop-ups. Five of these have over 10.

EE leads the MLB with 16

Juan Rivera has 11 vs only 17 true flyballs

Rajai Davis, a speedster that is trying to ‘man up’ and muscle the ball has 10 in only 69 PA

Corey Patterson, another slash and dash type hitter has 10

Just missing the list at 9 pop-ups in 21 batted balls is David Cooper.

With these numbers I calculated Legitimate BABIP, keeping SF in due to simplicity of data. 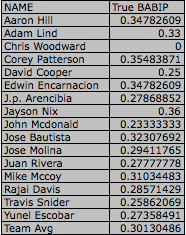 The Jays team avg of .301 is near the MLB avg. To be honest, I’m not really sure what to look for outside of outliers. Three Jays (Patterson, Hill & EE) are above .340. Rivera, Escobar, JPA & Snider are below league avg.

Even without knowing exactly what to look for, it appears that AHill is at least having some success when he’s not skying the ball in the air. And Rajai needs to ditch his off-season power focus and go back to his game of slash & dash.

Later this week I’m going to dive into a comparison of pre and post HR hitting AHill.

Note: Credit to Callum for coining the phrase ‘pop-up duty’