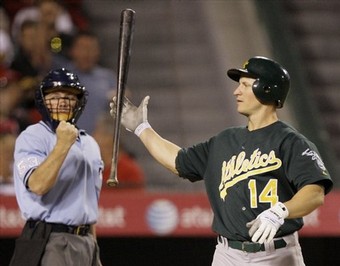 Heading into the beginning of the 2008 season it was readily apparent to anyone watching the A’s/Red Sox Japanese opening series that the A’s had high hopes for Mark Ellis, as he opened the season in the three spot of the order. By the end of the year Ellis hit only 12 HR with a .233 BA. Why didn’t Ellis put together a strong 2008 season? I suspect it has to do with Ellis taking home the crown of pop-up king in 2008.

In 2008 Ellis posted a ridiculous 25.1% IFFB (infield flyball percentage or pop-up). This number is a percentage of his overall flyball’s, which were 46.3% of his contact at-bats during the season. One other player hit more than 20% IFFB, with only a handful even about 17%. This is a far greater number than Ellis posted in the past but it is still alarming.

Ellis does provide good D and was a cheap signing for the A’s. In ‘real life’ he still provides value.

If you’re a fantasy player I’d advise that you let Ellis slip by in the latter rounds of a fantasy draft, no matter how deep the leagues rosters are.