This is a update/continuation of a post from late August:

CliffsNotes: Lawrie turned things around after a poor start to the 2013 season by exhibiting new found patience at the plate. This resulted in a drastically improved triple stat line, as well as K/BB rates and overall awesomeness.

In the above article I promised to come back and look at the remainder of Lawrie’s season at the plate. This small sample includes stats from August 26th until the end of the season.

Overall quality on base profile, including (percentile vs MLB = lower is better):

Linedrive Spray Chart: singles in the middle of the diamond, doubles down the lines. 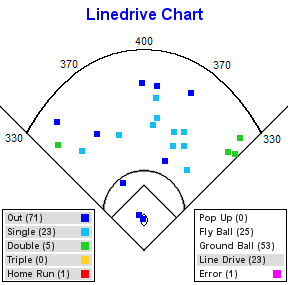 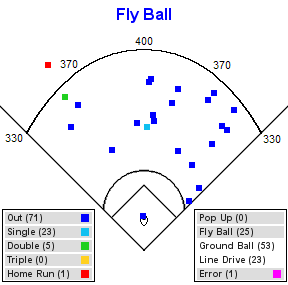 This has led to a low .120 batting average on flyballs, including a poor 4% HR/FB rate. His well-hit percentage of .080 on flyballs is terrible; The MLB average of our sample time frame (Aug 26th to the end of the regular season) stood at .233

With Brett’s D, I could live with his new OBP/Slappy production. But when considering past power output, I want more.

A real concern I have heading into 2014 is the number of ‘chefs in the coaching kitchen’. Brett has played at multiple levels, in multiple organizations over the past five years. And now we have yet another changing of the guard at the Batting Coach position in Toronto.

Ultimately, I have no prediction regarding Lawrie’s 2014. I see a player still trying to find himself at inside & outside of the ‘lines’. Another issue is how will the organization handle him?