While undeniably fun, this year it seems like an exercise in futility. And this is a good thing.

You see, in years past, it was fun to try to predict the opening day lineup because there were so many uncertainties. We would ask ourselves (especially in the J.P. Ricciardi era), “Which of the eight non-roster invitees will secure the three available spots in the starting pitching rotation?” Having a 25/26-man roster constantly in a state of flux does not generally a contending team make. This year, however, almost all roster spots have been spoken for, with very little wiggle room (barring injury, of course). This is a feature indicative of a contending team, and the Blue Jays are expected to contend for a playoff spot in 2021 and beyond.

Without further ado, it’s time to peer into our crystal ball. Mekka lekka hi, mekka hiney ho. Let’s provide some clarity on the direction the Blue Jays are likely to go:

The only real battle for playing time here comes down to Randal Grichuk and Rowdy Tellez. We know what Grichuk is: an average to above-average defender who struggles to get on base at a .300 clip. We’re not quite sure what Rowdy Tellez is, but we’re about to find out in a (hopefully) full season of games in 2021. Whoever can provide more value to the team while toeing the line between defensive and offensive value will likely win the lion’s share of playing time.

Additionally, Blue Jays manager Charlie Montoyo values positional flexibility. In keeping with the theme of providing defensive value, Teoscar Hernandez’s defensive shortcomings can be periodically hidden with spells at DH, while Cavan Biggio, Lourdes Gurriel, and Vladimir Guerrero can move around the diamond depending on matchups.

I might be in the minority with this opinion, but I’m still not sure that Cavan Biggio is a consistent Major League-calibre player. He’s only had 159 games at the big-league level, so I’d like to see where he’s at about about 1000 more at-bats. I also don’t love his arm at the hot corner. It’s well-known around the league that he has exceptional strike zone judgement, and I expect pitchers to make further adjustments to their plan of attack. If Biggio gets exposed, the Blue Jays may give Vlady more reps at third base than they are comfortable with. If Biggio adjusts in kind, his versatility and propensity to get on base will be extremely valuable to a playoff contending Blue Jays team.

What could happen:
While he has an influential supporter in Blue Jays president Mark Shapiro, Danny Jansen is an offensive black hole. My goodness. With that said, the Blue Jays are poised to be an offensive juggernaut, so offensive black holes can be smoothed over with the presence of dynamic bats throughout the rest of the lineup. However, the Blue Jays starting pitching is fragile at best. If there are going to be 10-9 and 15-14 games in the Blue Jays’ future, it will be interesting to see how much of the catching load Jansen will be expected to bear.

Here we are, the only real competition for a roster spot: Alejandro Kirk or Reese McGuire. The main things to consider here are development and options. Kirk needs development, how much we’re not entirely sure. But he does have options (he can be sent down to the minor leagues without being placed on waivers). Reese McGuire looks to be what he’s going to be, but he doesn’t have options (he has to be placed on waivers and is likely to be claimed by another team).

When you compare the two players head-to-head, it turns out to be the old idiom of six of one and a half-dozen of the other. Kirk has offensive upside, and performed well at the MLB level in an extremely small sample size. Yet defensively he still has some strides to make, albeit again, small sample size (he has caught a total of 214 pitches at the MLB level). What I’m not seeing talked about much is Kirk’s arm strength – his throws to second average 67.4mph. If you were to place that number in a 2019 context, he would finish last in all eligible catchers. Pitchers love to throw to him, but I’m sure Kirk’s admiration society will lose members once baserunners run uninhibited with him behind the plate. 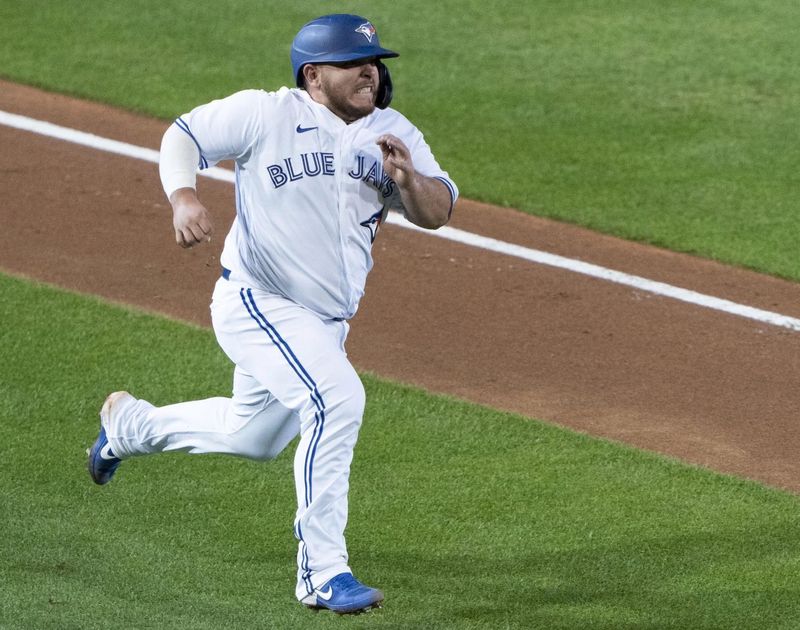 McGuire, on the other hand, is a defensively sound catcher. His pop times rank among the best catchers in baseball, as does his arm strength. Yet his bat is trash, there’s really no other way to put it. The thing is, catchers with McGuire’s skill set are a dime a dozen. If another team claims McGuire on the waiver wire, there are a long line of players that can be penciled in to do the exact same thing. By the way – when is Reese McGuire going to address the media as promised by Ross Atkins for the “Dollar Tree incident”? Still waiting. I’m sure it’s as likely to happen as Kelly Gruber’s pledge to tell his side of the story from his PitchTalks altercation “at a later date.” I have a feeling I’ll be waiting a while on both fronts.

Anyway, the Blue Jays are in win-now mode and Kirk has more of an upside than McGuire does. Kirk wins the roster spot and could potentially steal time from Jansen.

Consummate professional Joe Panik is the backup infielder. Should he falter, it’s likely Santiago Espinal and Richard Ureña are next in line. Randal Grichuk is the fourth outfielder. Should he be packaged in a trade for pitching, Jonathan Davis will step into the role.

On paper, this is not good. However, as the season progresses, I expect most of these guys to be pushed out of the starting five, save for Ryu and Ray. The oft-injured uber prospect Nate Pearson will rejoin the rotation when healthy and will slide into the #2 spot, pushing either Matz, Stripling, or Roark out of the rotation. What the team will get from Pearson is anyone’s guess. I’m setting the over/under on innings pitched for Pearson at 100 and I’m inclined to bet the under.

When the inevitable injuries come, the parade of stop gaps will be called up in order: Trent Thornton (recovering himself from elbow surgery), T.J. Zeuch, Anthony Kay, and maaaaaybe even Alek Manoah, or someone else not on the 40-man (please not Jacob Waguespack!) with Thomas Hatch recently succumbing to what looks like Tommy Juan. There’s not enough lipstick to apply to this pig, and even Ryu is no sure thing after fizzing out due to fatigue (and/or other issues?) at the end of the season.

What could happen:
After losing out on Taijuan Walker and Jake Odorizzi, Ross Atkins and Mark Shapiro have stated (though I can’t find where) that they are prepared to wait until July as they expect the market for pitchers to be more favourable. Randal Grichuk is the obvious name here, as the Blue Jays have a glut of outfield talent. But to generate any sort of value in return, the Blue Jays are going to have to part with value of their own: Lourdes Gurriel, Teoscar Hernandez, and/or a combination of high-ceiling prospects. July might be too long to wait; the lack of talented arms with reliable track records in this rotation is glaring and needs to be addressed urgently.

The Blue Jays could also be creative with their starting pitching by moving toward a 6-man rotation or using Julian Merryweather or others as an opener.

Blue Jay manager Charlie Montoyo is blessed with numerous right and left-handed options out of the pen, but a few question marks remain. Is old man Francisco Liriano still able to perform? Will Kirby Yates be able to re-capture the form he had in 2019? Can Julian Merryweather stay healthy for once in his life? Will Jordan Romano be able to build on his dominant 14.2 innings pitched in 2020? Tim Mayza is returning from a gruesome elbow injury – will he be able to perform at the same level?

All things considered, the bullpen is in pretty good shape. There’s always the option of transitioning some of the starting pitching depth, such as Anthony Kay, Trent Thornton, and Ross Stripling into bullpen pieces should the need arise. Not a lot to worry about here… I hope.

What could happen:
If everything breaks right, the back-end of this bullpen could provide shutdown innings and basically end games after the 6th inning. On the other hand, there are a lot of injury questions. If Merryweather, Romano, and Yates re-injure themselves in 2021, there isn’t really a lot of depth to pick up the slack. The Blue Jays might be forced into the Bobby Cox approach of acclimating starting pitchers to the big leagues with bullpen roles. Adam Kloffenstein, Alek Manoah, Joey Murray, and even Simeon Woods Richardson and Yosver Zulueta could be candidates should the bullpen become decimated by injuries. 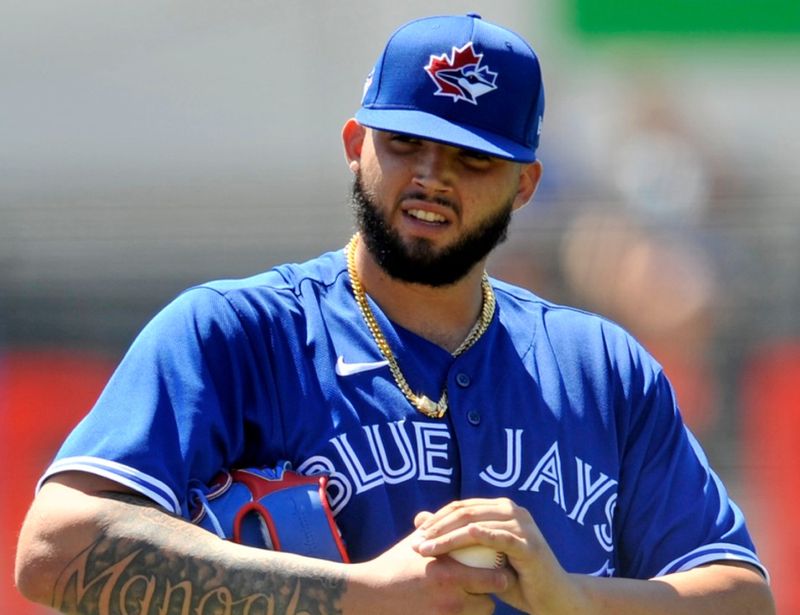 We’ve all seen the jokes and the memes about how much the Blue Jays, as an organization, value years of player control. Service time manipulation is real and for the most part the Blue Jays have been conservative with the development of their players. I expect that philosophy to transition now that they Blue Jays are on the cusp of contending. It’s why I would be loathe to mention names like Manoah and Woods Richardson and Zulueta before, but when each win is magnified in importance, the team will make the moves it needs to make – at least internally – to put themselves in the best position to succeed. Whether Ross Atkins is able to make a trade to address the inadequate starting rotation remains to be seen, but one thing is for certain: this team will be fun to watch. 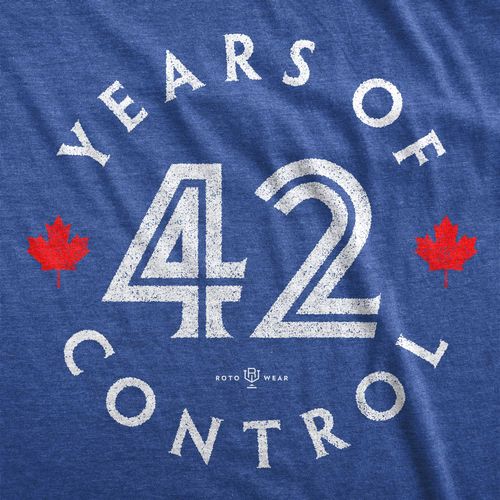