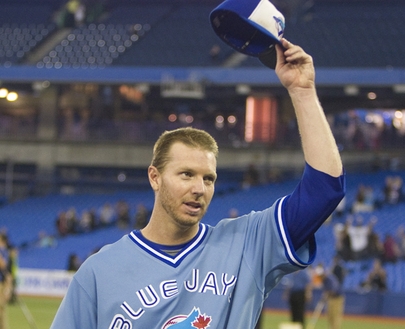 With Roy Halladay waving goodbye to Toronto and waving hello to Philadelphia, Toronto fans are anxious to find out who they are getting in return.  At this point it looks to be RHP Kyle Drabek, OF Michael Taylor and C Travis d’Arnaud. WHO!?! Let’s have a look at them more closely.

Kyle Drabek was selected by the Philadelphia Phillies in the first round (18th overall) of the 2006 amateur entry draft and is the son of former Cy Young Award winner Doug Drabek.  Kyle had a shaky start to his Phillies career and then missed most of the 2008 season due to Tommy John surgery.  When he returned he was nearly unhittable: he pitched in 53 innings in the inors and AFL and gave up only 25 hits with a 0.77 WHIP.  Drabek pitched in the Futures Game this year and scout Keith Law had this to say about him:

Drabek was 91-93 with a hard curveball at 79-80 that had a slider-esque horizontal break. His delivery is still rough, with some head violence at the end, and he commanded his fastball to his glove side but less so to his arm side. Drabek’s name has come up as the potential anchor of a stretch-drive trade for the Phillies, but he’s not that kind of impact talent — just a very good pitching prospect with a chance for two above-average pitches.

Drabek’s curve is a spike-curve of the AJ Burnett variety.  I look forward to seeing it at the Rogers Centre.

Michael Taylor was selected by the Philadelphia Phillies in the fifth round (173rd overall) of the 2007 amateur entry draft.  Out of the 3 prospects in this trade, Taylor is the closest to being major league ready, his ETA is next season or 2011.  Taylor was one of the best athletes in the 2007 draft who has a fluid swing that utilizes the lower half of his body.  He has legitimate 40HR potential.  He’s adequate defensively in a corner with an above average arm, racking up 18 OF assists this past season.  Of course nothing is a sure thing with prospects, but he has impact potential and projects as a middle-of-the-order guy.

Travis d’Arnaud was selected by the Philadelphia Phillies in the first round (37th overall) of the 2007 amateur entry draft.  He is probably the wild card of the 3 since he is the furthest away from the majors.  Those who are panicking about the status of JP Arencibia and Brian Jeroloman need not worry – d’Arnaud should be pencilled for Dunedin or perhaps Lansing. Although d’Arnaud started off slow this year he had a great 2nd half and it looks like his power is beginning to develop since he upped his doubles production a great deal.  He is not the most patient of hitters and that was exposed when he jumped a level in 2009.  He does make good contact and, like most catchers, is a slow, slow man.  His saving grace however is that he has well above average defensive skills.  His ETA is 2012 or 2013.

This just in… Michael Taylor will be traded to the Oakland Athletics for 3B prospect Brett Wallace.

The Blue Jays have long been hot for Brett Wallace, originally selecting him in 2005 but Wallace chose to go to school instead.  It is up in the air as to where he fits in for the Jays.  He may be the long term solution at 3B post Edwin Encarnacion but many scouts feel he needs to move to 1B real soon, so he may take over from Lyle Overbay should Overbay be shipped.  Anthopolous may be backfilling for one of the balls he has up in the air.

Keith Law had this to say about him:

Wallace was the best pure hitter in this year’s draft, but fell to the Cardinals due to questions about his ultimate position. He’s playing third base right now, and the Cardinals intend to keep him there until he plays himself off it; he has plenty of arm and is fine on balls in front of him, but lacks lateral range … severely. Still, his bat is so special that if he can improve to just a win below average at third, he’ll be a star. He makes hitting look easy — he hits lefties (.387/.479/.484 in 62 at bats last year) and righties, all pitches, all areas of the zone, whatever’s thrown at him — and has pull power to right and doubles power the other way. Sure, his body type is unusual for a pro baseball player — he has enormous thighs, but it’s muscle, not fat, and emphasizing that only detracts attention from what really matters: Brett Wallace will hit.

Jim Callis of Baseball America was worried about Wallace’s power.

I also give Brett Wallace next to no chance of playing anywhere but first base, and that was a problem for the Cardinals. He was less valuable to them than he is to the A’s, who need a first baseman and can put him at DH.

I think he’d have to be more than just decent, because no one I’ve talked to really think he’s going to be a pro third baseman. The bigger key for Wallace, who’s going to be a first baseman, is power. No one questions his pure hitting ability, but they’d like to see more pop.

The consensus around pro scouts is that Wallace is big league ready with the bat and projects as a #3 hitter. Wallace is a better prospect than Taylor with higher offensive potential.  Some highlights on Wallace’s minor league track record: