It appears that R.A. Dickey to the Toronto Blue Jays is all but a done deal; with just the surrounding pieces needing to be ironed out.

With that said, here’s a quick Saturday night mini-scouting report on R.A. I’m going to avoid going into details that you’ll find on many other sites. We’re named Mop-Up Duty for a reason 🙂

Top of the line stats:

Flyball’s, HR hit at below MLB average distances, which is a good sign. As the strike data indicates, Dickey throws strikes early and often. The swing rate is near the top of the MLB. When opponents do not swing, the ump comes to Dickey’s aid and calls strikes in the 92nd percentile. In-turn, this leads to the high chase percentage. Long story short–opponents have no choice but to hack away at pitches early in AB’s. This has to work to R.A’s advantage, as this gives batters fewer looks at the knuckleball in question.
Pitch F/X Data:
Here are two images (based upon spin velocity & movement) , taken from Texas Leaguer Pitch F/X charts. The first come from Brandon Morrow’s fastball during his final 2012 MLB start. Notice the tight-ish clusters on both images:

And now to illustrate the difficulty batters face when matching up against the knuckleball, check out the same two type of graphs, expect this time they showcase R.A’s knuckler from his final 2012 MLB start:

Variety of movement and spins = makes the pitch difficult to square up (and I imagine difficult to catch).
Location:

The knuckleball is thrown all over the strike zone. This goes back to the strike data we looked at earlier in the article. Dickey stays within the zone, and forces batters to swing or risk a 37%+ chance of taking a strike call. 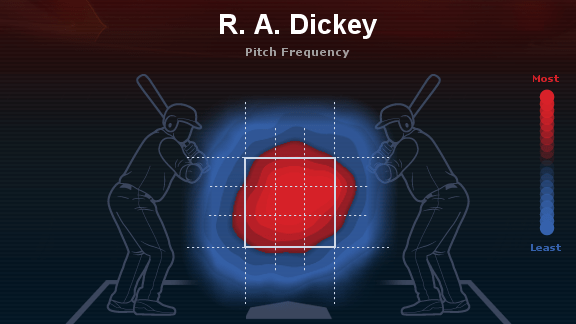 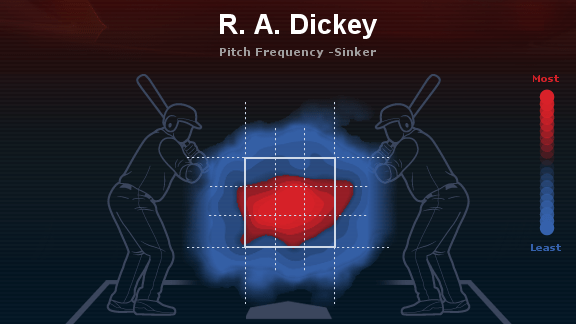 In line with MLB averages, higher SLG is to be expected on flyballs due to the nature of the knuckleball.

R.A Dickey did an amazing job in controlling opponents running games– not just for a knuckleball pitcher but any pitcher. He allowed only 4 SB in 7 attempts over 233 IP. He also tied for 6th in the MLB with 5 pick-offs.

Conclusion:
In my mind R.A Dickey is a pitcher with a solid track record (2.8, 2.5, 4.8 WAR in his past three seasons) that knows how to pitch, control the running game, get ahead in counts and, especially in 2012, put hitters away. A repeat of 2012 is hardly a guarantee but even a regression to 2010, 2011 levels gives the Jays a solid inning eater in the rotation. And if he’s able to recapture some of the glory from last season….
Note: Article thrown together at 5pm, Sat afternoon, before trade completion, full list of players involved, etc.
Sources: ESPN True Media, Texas Leaguer Pitch F/X, Baseball Reference Play Index, Fan Graphs