Jeez, we’re almost turning into a Randy Ruiz fan site! From this January 2009 quote by myself

The Blue Jays recently signed longtime minor league Randy Ruiz to a contract. In my opinion, this is the best FA signing by the Jays this offseason.

So is Randy Ruiz the next Ryan Howard or Jack Cust? I say that not in the sense that he is going to hit 50HR or walk 150 times, but that he is a player who just straight mashes but is blocked from the bigs by a glut of players at his position.

Edward “Bubbie” Buzachero was originally drafted by the Jays in 2002. He was later traded to Cleveland for Brian Tallet and then re-acquired as a minor league free agent by Toronto last off-season.

“Development-wise he’s kind of different,” the scout said. “His velocity was better in college (Tennessee Tech) than it was when I saw him last year or now. But it’s winter ball, so you really have no idea where he could be, or if he could be back to those 94s and 95s you saw back then. He’s 88-89 and topping out at 91 now.
“The velocity isn’t quite what it used to be–here, at least–but the breaking stuff is much better. I like his slider better than his curveball now. It darts down with very good depth and he commands his fastball to both sides.

While ERA isn’t a sexy stat these days, Buzachero has had only one season with a 4+ ERA in eight seasons of minor league baseball. His career ERA is 3.33, with 467 strikeouts vs 167 walks in 519 IP. Last 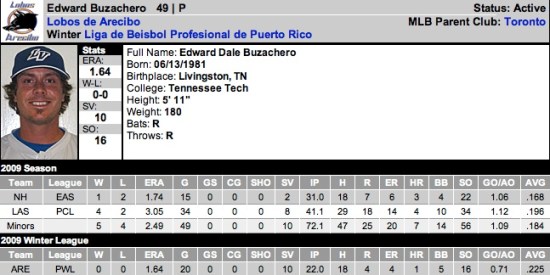 Last season his overall AA & AAA WHIP was 0.843 in 49 appearances. In Vegas he acted as a de-facto closer for a portion of the season, saving 8 games (along with 21 games finished) in 34 overall appearances. Buzachero is another in a long line of possible bullpen candidates for the 2010 season.

As a member of Lobos de Arecibo of the Puerto Rican Winter League, Bubbie has 10 saves, over a 3/1 strikeout to walk ratio and a .225 opponents batting average against.

I wrote about recent acquisition Willie Collazo the other day. The gist is he could be a productive member of the 2010 Jays Bullpen as a lefty specilast. His winter ball stats (once again in Puerto Rico) seem to back this up;

The lefty sample is a small 7 IP, yet it remains in line with his historical success vs lefties.

Three scrap heap pick-ups making good in Winter Ball. With 2010 being seen as test run of sorts, I hope to see all three of these players given ample opportunity at the MLB level.