While watching the Toronto Blue Jays play the Baltimore Orioles on Opening Day last week, I saw a tweet by Blue Jays statistician Scott Carson that piqued my interest:

Jose Bautista with his 77th career OF assist with #BlueJays, 2nd in franchise history but 40 behind all-time leader Jesse Barfield (117)

Sure, outfield assist totals aren’t the perfect measure of outfielder arm strength.  Some outfielders with great arms don’t rack up many assists simply because baserunners won’t risk running on them. As soon as a player garners a reputation for having a cannon of an arm, the opportunities to throw out runners dry up like a raisin in the sun.

On the other hand, some outfielders are generally accepted to possess trashbag arms, yet they still rack up the assists.  Take George Bell, for example. While his bat was powerful, his throws from left-field were decidedly average.  As a result, baserunners would try to stretch singles into doubles and be more amenable to tagging-up at third base and trying to score when the ball was hit to Bell.  This meant that George had many, many chances to throw runners out. Sometimes he was successful; Bell racked up 74 outfield assists in 1078 games as a Blue Jay.  As the saying goes, a broken clock is right twice a day.

This got me to thinking: apart from Barfield and Bautista, who are some other Blue Jays outfielders that were known for their throwing arm?  And of those candidates, how would I rank them?

Without further ado, below is my ranking of the all-time greatest Toronto Blue Jays outfield arms:

Green had a monster right-field arm before a shoulder injury relegated it to an ineffective limp noodle.  Although he was never a consistent outfield assist-compiler, he did finish 4th in the American League with Toronto in 1998.  Tragically, I can’t find any footage of Green launching missiles from right-field, but I do fondly remember the sound of jaws dropping onto the Rogers Centre concourse following a Shawn Green throwing display. 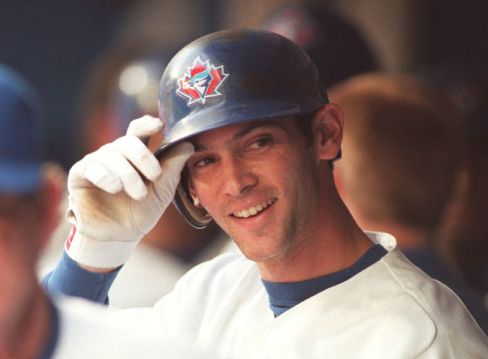 Jose Bautista spent most of his career as a third baseman before joining the Blue Jays and transitioning to the outfield.  Like Shawn Green, Bautista never racked up many outfield assists in any particular season, but the strength of his arm was undeniable:

Another common thread between Bautista and Green is that shoulder injuries lessened their outfield effectiveness.  Bautista suffered a severe shoulder strain following an ill-advised throw from right-field to try to nab Delmon Young at first base.

Following that injury, Bautista’s arm hasn’t been the same. He would flip his throws into the infield side-armed and even under-handed. It could be said that he ventured into Shawn Green limp-noodle territory.  However, if opening day was any indication, Bautista’s arm is back to being at least serviceable.  While it remains to be seen if Bautista will ever recapture his former throwing-glory, it appears that at least one Oriole missed the memo that Bautista’s noodle is no longer limp.

Although Moises Sierra‘s time in Toronto was short (he played in only 97 games over parts of three seasons), the impression he made with his throwing arm was indelible.

Candido Maldonado spent most of his baseball-playing career on the west coast.  He became a rental player for the Blue Jays in 1992 and was a key player on that World Series Championship team. Although he was not fleet-of-foot, Maldonado made up for his lack of range with his powerful throwing arm.

Like most rankings, there’s going to be disagreement.  Did I over-hype one player and slight another? Was I too hard on George Bell? Did I leave a deserving player off the list altogether? Let me know in the comments section or @ me on Twitter @callumhughson. 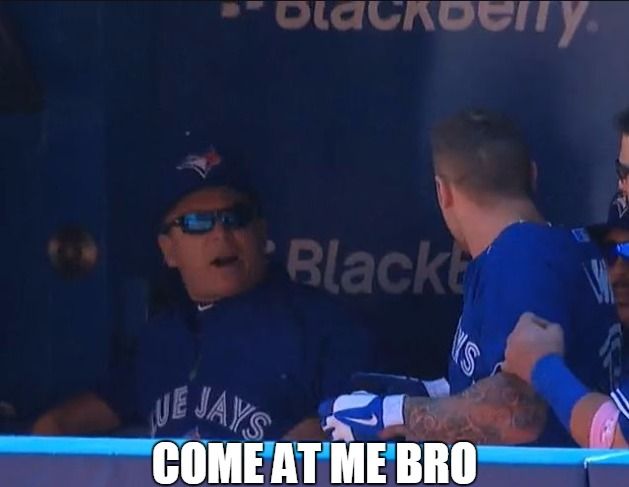 Thanks to intrepid commenter Matthew Elmslie and a few of you on Twitter who reached out to let me know that I made an egregious error in omitting Mark Whiten from this list. Whiten is best known for hitting four home runs in a single game, albeit as a St. Louis Cardinal.  This hyperbole-filled article from the LA Times states that ‘Whiten’s Arm Is Surpassed Only by His Bat.’  This is faint praise because, apart from his four-home-run-day, Whiten’s bat wasn’t all that impressive over the course of his 11-year career.  Regardless, if I had to add him to the rankings above, I would slot him at 5th all-time, behind Jose Bautista and ahead of Moises Sierra.