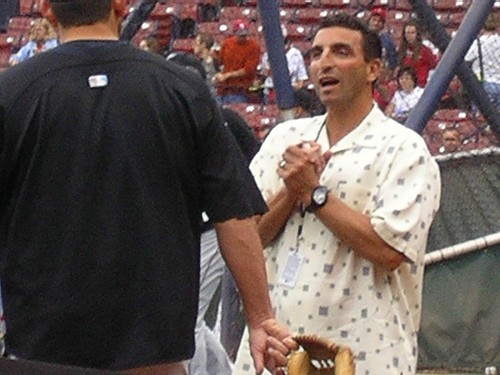 Recently, Jays’ GM J.P. Ricciardi has commented that the Jays are unable to compete in the AL East with a payroll of $70 million (which is 17th in all of baseball).

“I think you can be competitive and you can have some good years, but I think these two teams (Boston and New York) with their payroll, it’s going to be really tough to catch these guys if we stay at a $70-million payroll. It doesn’t mean we can’t be good, we can’t compete. I just don’t think you’re going to see a chance to win 95, 100 games.”

As Buster Olney from ESPN.com remarked, the Jays and Rays are faced with contending against baseball’s two financial monsters: Boston and New York. The Orioles also have the means to be a budget powerhouse, with the right kind of player moves, and they intend to spend a lot of money in this offseason.

“Over 162 games, the disparity manifests itself. A perfect storm of injury-free pitching and player development would have to come together for the Jays or Rays to win the division for one season, let alone have a solid run of two or three years at or near the top.”

Basically, what separates the teams is the ability to stock the bench and bullpen with studs while having legitimate players in the farm system to go to when things go terribly wrong.  When Keith Foulke faltered, in stepped Jon Papelbon.  When Hideki Matsui mangled his wrist, up stepped Melky Cabrera.  When Josh Towers tumbled and Russ Adams became an abomination…… in stepped Marcum/Janssen/Taubenheim and Figueroa/Alfonzo/McDonald/Roberts with predictable results.

Enough is enough. Fickle Toronto fans can only take so much mediocrity. If the viability of the franchise is to continue, re-alignment must take place. There has been talk of rotating teams throughout divisions on a yearly basis. I think that is a messy, bad idea. What I propose is a straight up trade. The AL East trades the Toronto Blue Jays to the NL East for the New York Mets. The Mets have the resources to compete with the likes of the Yankees and Boston and what would be better for baseball than the two teams from New York battling each other 15+ times a year? Those inferiority complex ridden Red Sox fans could take solace knowing that a team that could (pay)roll with the Yankees could beat up on them throughout the season while they experience their late season collapse.

Toronto’s pitching staff was made for the NL and Roy Halladay would be simply dominant, even more so than he already is. The Jays would have a legitimate shot at the playoffs each year facing teams with similar payrolls and markets as well as re-igniting long dormant rivalries with the Braves and Phillies. What about the Tampa Bay  Rays you ask? They should move to Montreal. But that is another post for another day….