It wasn’t long ago we had the eagerly anticipated debut of another young stud, Kyle Drabek.

The 21-year old Hutchison was drafted by the Toronto Blue Jays in the 15th round  of the 2009 first-year player draft.  Hutchison’s rise through the Jays minor league system has been meteoric:  he advanced two levels in his first year and two more last season to make it to AA New Hampshire.  He’s ranked as the Blue Jays’ #7 prospect according to MLB.com.

Hutchison features a four-seam fastball that tops out at 95 (but typically sits in the low 90s), a two-seam fastball at 88-91 with late, arm-side run. His slider is a work in progress and he will also flash a circle change.  Across three levels last season, Hutchison finished with a 14-5 record, 2.53 ERA, 171 strikeouts in 149.1 innings while allowing only 35 walks.  This season he was 2-1 with a 2.16 ERA. 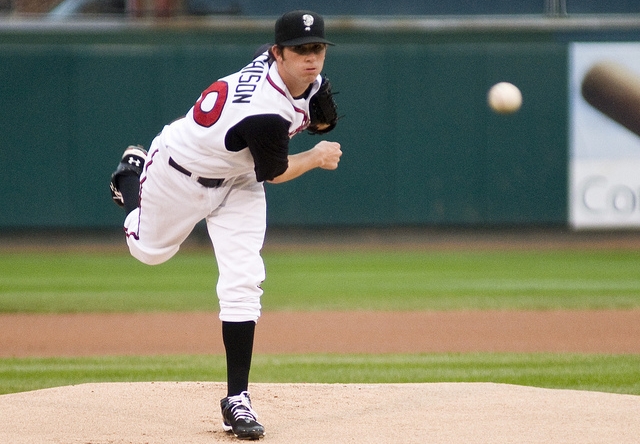 It was not only his dominance in the minor leagues that prompted the Jays to call Drew Hutchison to the show, but also his calm, unflappable makeup.

“Very calm,” Farrell said as he compared (Charles) Nagy and Hutchison. “They project a very genuine internal confidence. They’re not vocal by any means, but they believe in themselves and they know what their job is.”

“The one thing that stands out is his maturity, whether that’s in a one-on-one interaction [or] seeing the way he goes about his work,” Farrell said. “You watch his bullpens and there is intent and purpose with every pitch he throws. A lot of times you’ll see guys of that age and that inexperience level, and all they want is to hear the glove pop. Well, he’s about executing pitches and commanding the baseball.”

I just really try to stay under control, to be able to execute the next pitch,” he said. “You don’t want anything you’re doing to keep you from losing focus. 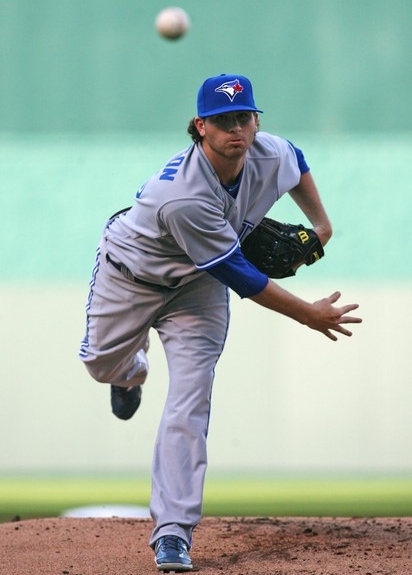 That brings us to Drew’s debut – and what better place to pitch your first MLB game than beautiful Kauffman Stadium in Kansas City?

Hutchison is advertised as a strike-thrower and he lived up to his reputation in the first inning.  He pounded the zone early on and his only blemish was a mistake changeup left up over the plate that Alex Gordon hit for a home run.  What impressed me most was that Hutchison showed no reaction (the polar opposite of the aforementioned Kyle Drabek).  As soon as he got the ball, he resumed pounding the strike zone and struck out Billy Butler on three pitches.

Like Kyle Drabek, he works quickly.  Very quickly.  But he’s deliberate – the game doesn’t speed up on him and each pitch has a purpose.

Hutchison then went on to strike out Eric Hosmer on the same pitch he got Butler on: a two-seam fastball with late, arm-side run.  It is an effective pitch to be sure.  Of the 15 pitches Hutchison threw in the first inning, 11 of those were strikes.  Another thing:  when Hutchison missed, he missed low.  That’s what you like to see in a young pitcher.

In the second inning, Hutchison got himself in his first jam.  With two on and two out, Hutchison fell behind left-handed hitter Mitch Maier 2-0.  Pitching coach Bruce Walton came out and had a wee chat. I’m not sure what was said but it might have been something he noticed in Hutchison’s delivery.  What does Drew do? He comes back with a pea at the knees and the two-seamer to put Maier away.  He showed great composure in carving up the strikezone after falling behind, and it’s really quite remarkable when you think about it.  This is his big-league debut.  His body must be numb.  From a makeup standpoint, it’s really something special to see.

In the third, Hutchison gave up a leadoff double to Yuniesky Betancourt.  After falling behind 3-1, Hutchison tried to reach back for a little something extra in order to challenge Yuni with a fastball.  That’s something that Drew would have gotten away with at single-A Dunedin and double-A New Hampshire, but Betancourt is a bona-fide MLB player.  He was all over it and lined it for a double.  As control-artist Greg Maddux used to say, it’s better to take something off than to put more on.  Perhaps Hutch could hear his words inside his head.  He got into the same situation with the next hitter, Alex Gordon, and threw a fastball with a little less velocity but much more movement.  Gordon couldn’t square it up and fouled it off to run the count full. Hutchison was eventually able to induce a double play and get out of the jam.

The second and third innings saw some inconsistencies with Hutchison’s arm angle and release point.  As a result, he missed the strike zone much more often.  Whereas he threw 11 of 15 pitches for strikes in the 1st inning,  he threw only 16 of the next 32 pitches for strikes.  This is not uncommon for young pitchers in pressure situations, especially one such as Hutchison who only has 234.2 professional innings under his belt.  Inevitably young pitchers think that they have to make the perfect pitch – or in the case of an MLB rookie – do something “more” than what they’ve already done to get here.  Hutchison’s delivery is smooth and repeatable, so I anticipate he will improve in this regard with additional experience and dulcet tones whispered into his ear by Papi Walton.

Hutch was able to put together a 1-2-3 4th inning.  He settled in and relied on his sinking fastball to get groundball outs.  He even threw a few sliders.  Yes, his slider comes as advertised – it needs work. It looks like a lazy cut fastball.

In the 5th, Alcides Escobar led off with a double.  That brought up Mitch Maier, who was now seeing Hutchison for the third time in the game.  Having seen Hutch’s two-seamer in his previous two at-bats, the surprise factor was negated.  Maier pounced on a two-seamer that floated towards the middle of the plate and crushed it for a triple.

It’s at this point in the game that Hutchison needs to find an alternative pitch to get hitters out the second, third and fourth times through the order.  Another bloop single followed by a walk and the bullpen began to stir.  At this point Hutch was starting to look fatigued.  The arm angle was inconsistent and he was getting under the ball, causing his pitches to be elevated or to sail outside the zone.  I’m sure that Drew didn’t sleep a wink the night before and he must be exhausted emotionally as well as physically after the events of the preceding days.  Still, he finds a way to induce a double play ball before letting the game get away from him courtesy of a long ball from Eric Hosmer.

After an extended breather in which the Jays are able to put some runs on the board in support of the rookie, Hutchison is sent out to start the 6th inning with 88 pitches under his belt.  This hardly ever happens, but Blue Jays’ manager John Farrell is a pitcher’s manager to be sure, so it is not surprising that Hutchison was sent out for another go ’round.  Hutchison got the leadoff hitter Brayan Peña to ground out, before getting himself into a jam and leaving with runners on the corners and one out.

The final line on Hutchison:

My first impression of Hutchison is that he reminds me a lot of former Twins & Cubs pitcher Kevin Tapani.  A pitcher with pinpoint control, he won’t strike out many batters but he won’t walk many either. He’s a classic pitch-to-contact guy who is effective when he takes the sting out of opposing hitter’s bats.  I’m not going to say that Hutchison is a Tapani clone after one start, but I get the sense that with the stuff that he has shown now and with a natural progression on his slider and changeup in the future, he’ll be a serviceable Major League starter who would likely slot in the #3 spot of a rotation if all goes according to plan.  If Hutchison can’t come up with a pitch or two at the same level as his two-seam fastball, I see an innings-eating back-of-the-rotation starter in the mould of Joe Blanton. 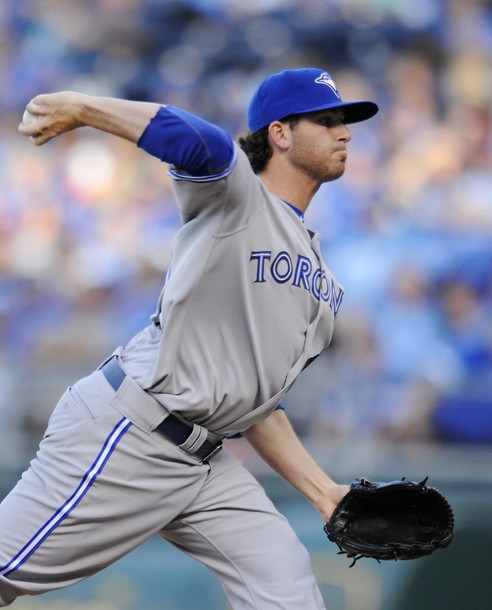