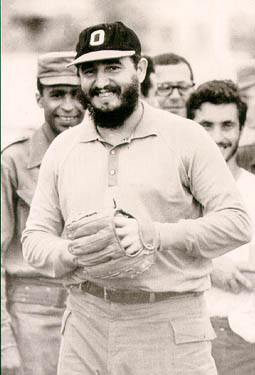 Former Cuban president Fidel Castro has taken to blogging his thoughts on the internet.  Topics include the Agonies of Capitalism, Obama’s politics & ethics and…… even the World Baseball Classic!

Thanks to Escambray, the newspaper of the province of Sancti Spiritus in Cuba, we can read Fidel’s weblog translated to english.

The Baseball Classics have been sponsored by the ones who manage the exploitation of sports in the United States.  Those are shrewd, intelligent people, who can even be as diplomatic as might be necessary.  However, they can not dispense with our country in those Classics.

That is why in between today and tomorrow in San Diego one of the three teams will be irremissibly eliminated without having to compete first with the team of the United States, the country of the “Big Leagues”.  That means that, next, two of those three will be left out.  We are forced to wage our battle and design a strategy in the face of those vicissitudes.

Our hopes were based on the patriotic dedication of our athletes and the fervor with which they defend their honor and their people, from a pool which is several times, even dozens of times, lesser in human resources as compared, for example, with Japan, discounting from those resources those that are weak in conscience and permit themselves to be bribed by our enemies. But this is not enough to maintain our supremacy in baseball. We have to apply methods that are more technical and scientific when we develop our sports figures. Our country’s excellent educational and sports base allows for that.

Nowadays we have enough young pitchers and batters with magnificent sports qualities. In a nutshell, we have to revolutionize the methods for the preparation and development of our athletes, not just in baseball, but in all the sports disciplines.

Make sure to head on over to Escambray and read Reflections by Comrade Fidel.  Also, one other noteworthy thing I found out is that Fidel’s son, Antonio Castro, is the Cuban team’s doctor. He is pictured below. 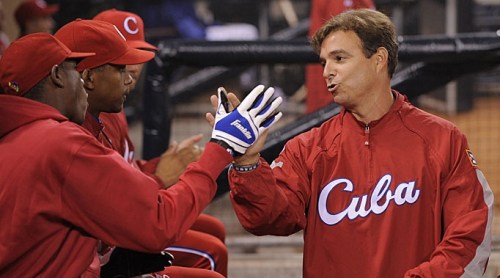