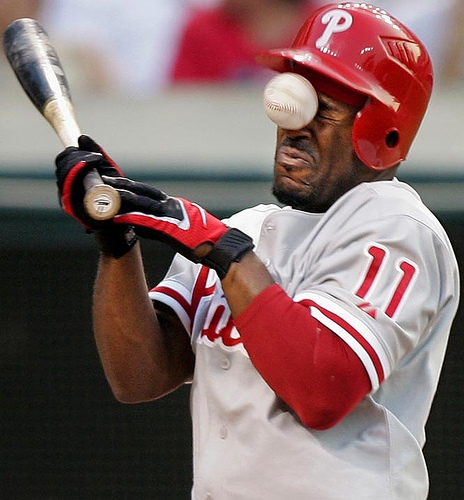 Daniel Murphy hit a two-run homer, Mike Pelfrey pitched 5 1/3 effective innings and the Mets beat the Philadelphia Phillies 7-4 on Friday night in the first meeting between the two rivals.

Before the game, general manager Omar Minaya backed off comments he made Thursday that the team lacked an edge. Perhaps his remarks inspired the Mets.

“I guess we had an edge tonight,” Mets manager Jerry Manuel said. “I feel good about how we approached the game. We have to bring that level of intensity and focus every night no matter who we play.”

The Phillies have embarrassed the Mets the last couple of years.  The Mets have to start winning some games to keep the rivalry alive, and they did so last night.

To clarify what I mean by embarassed, I mean I think the Mets are embarrassed about losing the division to the Phillies the last couple of years. I think what happened the last two years in the front part of their brains. Let’s recap this rivalry, shall we?

On January 23, 2007, Phillies star shortstop Jimmy Rollins made a statement that may have set the rivalry in a dead heat:

“I think we are the team to beat in the NL East… but that’s only on paper.”

Many Mets fans and players laughed at the prediction, especially once the Phillies stumbled out of the gate in April, starting the season at 1–6 and posting an 11–14 record for the month. The Mets, meanwhile, sat firmly in the NL East lead for almost all of the season.

As the season wore on, Philadelphia developed momentum as a wild-card contender. The Phillies dominated the Mets in head-to-head play, posting three separate series sweeps, including a pivotal sweep of a four-game series at Citizens Bank Park in late August which included two walk-off hits by Chase Utley and Ryan Howard and comeback victories for the Phillies in 3 of the 4 games. By the time Philadelphia swept the Mets at Shea Stadium in mid-September, the Phillies were threatening to move from wild-card contender to division leader. With 17 games left to play, the Mets led the Phillies by 7 games; during that final stretch, the Mets won only five games and lost twelve, while the Phillies went 13–4. On the final day of the season, the Phillies won the division, backing up Rollins’ quote.

According to Baseball Prospectus, the Mets’ collapse over the end of the season ranked statistically as the second-worst in baseball history.

On February 16, 2008, Mets center fielder Carlos Beltran made a statement regarding the upcoming season. He stated:

“[without] Santana, we felt, as a team, that we had a chance to win in our division. With him now, I have no doubt that we’re going to win in our division. I have no doubt in that. We’ve got what it takes. To Jimmy Rollins: We are the team to beat.There isn’t a team in the National League that’s better than us. The pressure’s back on them if you ask me. They were on paper the best team in the division last year and they were supposed to win, and they didn’t. One, there are four other teams in our division who are going to make sure that doesn’t happen, and two, has anyone ever heard of plagiarism? That was pretty good, especially coming from him. He’s a quiet guy, so it was probably shocking when he said it. Not shocking in a bad way, like ‘Wow, I can’t believe he said that.’ More like, ‘Wow, he finally said something because he’s a leader on that team and you definitely need to be a vocal leader.” 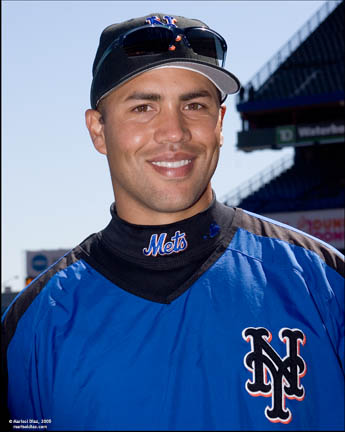 Former Phillie and special hitting instructor Mike Schmidt fanned the flames of the rivalry with an e-mail to manager Charlie Manuel, later posted for the entire team in the clubhouse:

“One pitch, one at bat, one play, one situation, think ‘small’ and ‘big’ things result, tough at-bats, lots of walks, stay up the middle with men on base, whatever it takes to ‘keep the line moving’ on offense, 27 outs on defense, the Mets know you’re better than they are… They remember last year. You guys are never out of a game. Welcome the challenge that confronts you this weekend. You are the stars. Good luck. #20.” 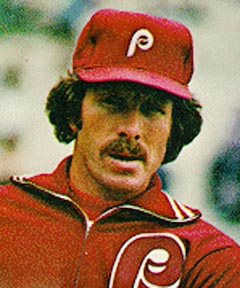 In 2008, The Phillies won the National League East on September 27, while the Mets were eliminated from postseason the next day with a 4–2 loss to the Florida Marlins in the final game at Shea Stadium.  The Milwaukee Brewers defeated the Chicago Cubs that day to clinch the National League wild card. This marked the second year in a row the Mets were eliminated from the playoffs on the last regular-season game. It also marked the first time in baseball history that a team had lost the last game of the season to miss the playoffs after holding a 3 game lead in two consecutive seasons.

After victories over the Milwaukee Brewers and the Los Angeles Dodgers in the postseason, the Phillies went on to win the World Series over the Tampa Bay Rays. During the team’s post-parade celebration on October 31 at Citizens Bank Park, Jimmy Rollins took verbal shots at the Mets organization:

“A lot of things were made in the offseason. We can talk about the New York Mets. They brought in that great pitcher, Johan Santana, but they forgot that it takes more than one player to bring home a championship.”

Nearing the end of 2008 and the thick of the offseason, World Series MVP Cole Hamels was asked by WFAN radio hosts whether he considered the Mets “choke artists”. Hamels replied, “For the past two years they’ve been choke artists.” He explained that he considered Mets shortstop José Reyes a showboater for his post-home run displays. 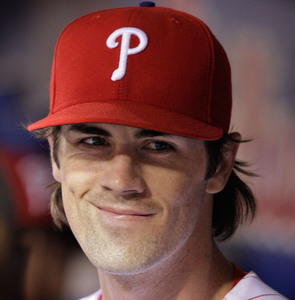 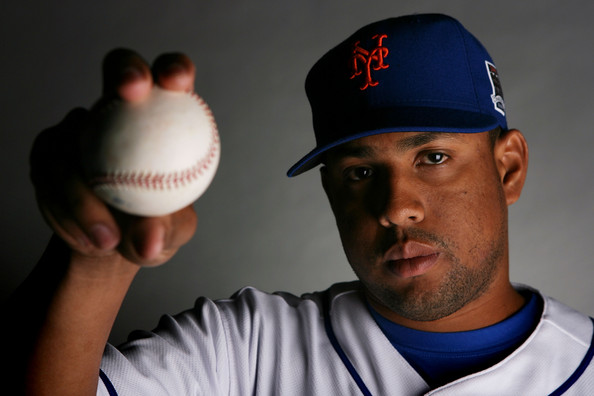 Though it’s early, the Mets are the ones chasing the Phillies and the first-place Marlins. New York (10-12) had lost seven of 10 coming in. Philadelphia (11-10) has dropped two straight after winning five in a row.

Conveniently I will be liveblogging  the matinee matchup of these NL East Rivals over at the Score at 3:30 pm.  Make sure to stop by and join in!