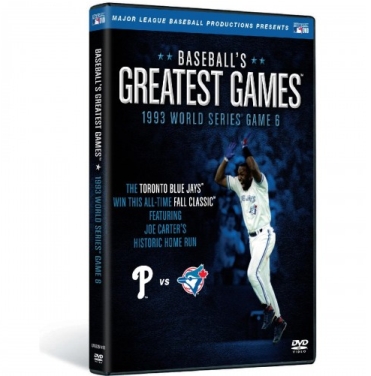 A&E was kind enough to send Mop-Up Duty a stack of inspection copies of their 1993 World Series Game 6 DVD.  A&E describes it as:

From the start the 1993 World Series, matching the Philadelphia Phillies and defending champions Toronto Blue Jays, was a scoreboard operator’s nightmare as the first four games produced 65 runs. Game Five calmed the scorekeepers as the Phillies Curt Schilling spun a complete-game 2-0 shutout.

With the series shifting back to Canada, the Blue Jays 3-run first inning had the Toronto faithful poised to party for a second straight year. However the tough as nails “Dudes” from Philadelphia stormed back and carried a one-run lead to the bottom of the 9th inning.

The sport’s greatest leadoff hitter, Rickey Henderson sparked the action; the series best player and MVP Paul Molitor singled and the stage was set for an historic home run. With a mesmerizing swing, and delirious dance around the diamond, Joe Carter hit only the second World Series winning walk-off home run.

Direct from the Major League Baseball archives, this extraordinary television broadcast includes the quintessential making of a Fall Classic hero, an iconic moment, and one unforgettable baseball game.

A special DVD audio feature allows fans to watch the television broadcast and listen to the radio play-by-play!

An unforgettable game it was – and probably the most important game in Blue Jays history.  Having said that, I was at this unforgettable game in person – thanks to my Dad being able to procure tickets.  However, I have forgotten a lot of this unforgettable game since I was only 12 years old at the time.  In the 18 years that have followed, I have played a lot of baseball and seen a lot of baseball.  The passage of time has given me a much greater understanding and appreciation of the game and being able to watch this game with a fresh perspective is a real treat.

As I said before, I don’t remember a lot from the game.  But I do remember the SkyDome being LOUD.  The DVD is worth the $12.95 (+ shipping) alone just to hear how loud Toronto fans can be.  To begin the game, Toronto pitcher Dave Stewart strikes out Lenny Dykstra on 3 straight pitches.  The raucous SkyDome crowd of 52, 195 gets louder with each pitch to the point of doing backflips in their collective seats at the conclusion of the at-bat.  It is remarkable.

Getting back to the fresh perspective.  Looking at the Blue Jays through the lens of my 31-year old critical eye as opposed to my 12-year old fanboy-starstruck-gaze, I’ve been forced to re-evaluate my opinion of certain Jays players:

Pat Borders:  A tremendous defensive catcher.  He frames pitches like his name is Jose Molina and he is able to block Dave Stewart’s forkball in the dirt all night long.  And he had to.  JP Arencibia would do well to watch tape of how Borders smothered errant pitches.  Just a great defensive catcher.

Dave Stewart:  I always thought Dave Stewart was a huge stud based on his menacing gaze alone.  At this point, the 36-year old Stewart is past his prime and it shows.  He struggles to put the ball over the plate and can’t throw a first-pitch strike to save his life. 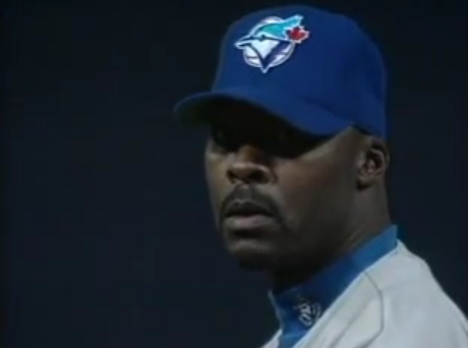 Paul Molitor:  Wow.  Does he ever look great in a Jays uniform.  I was impressed by how quick his bat was and the amount of power he was able to generate with such a compact swing.  His 5th inning home run is a testament to that.  On the basepaths, Molitor showed impressive wheels for a 36 year old (which he was) or even a 25 year old.  He turned a double into an easy triple with his speed.  As well, with his swing, it was difficult for pitchers to miss his bat.  He struck out only 71 times in 725 plate appearances that season.

Note:  above clip was taken from a source other than the DVD being reviewed in this post.

Tim McCarver:  is grating.  His co-host – Sean McDonough – is okay.  Luckily, this DVD has the option of switching over to the radio broadcast (featuring the tandem of Jerry Howarth and Tom Cheek) for audio as opposed to the McCarver atrocity that is the television broadcast.

Tom Cheek & Jerry Howarth: Having listened to these two do play-by-play and colour commentary, I was able to put my finger on what makes them so popular.  The fact of the matter is that when they call the games there is no bullshit involved.  They call the game as it is and don’t pollute the broadcast with tired clichés, superfluous comments and blatantly erroneous observations.  It’s the same reason why Vin Scully is a treasure while Tim McCarver and Rick Sutcliffe are villified.

Joe Carter: His defensive routes in right-field can only be described as comical.

Terry Mulholland:  His pickoff move is unreal.  On the level of Mark Buerhle or Andy Pettitte.

Lenny Dykstra:  I didn’t know this before watching, but his arm in centrefield is absolutely EMBARRASSING.  It’s like a shot put from a limp noodle.   It makes Johnny Damon look like Roberto Clemente. 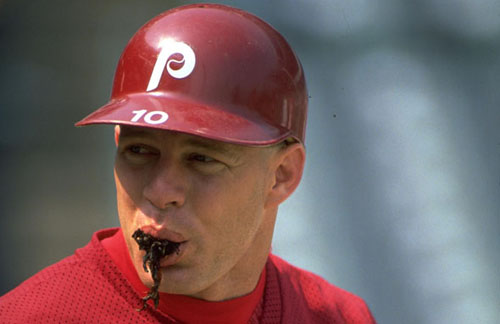 It’s hard now to look at him without the taint of his fraudulent dealings and scumbag predatory behaviour.

Devon White:  He’s a gazelle in CF.  From his reads to his routes to the ball, no one in today’s game can touch him.  On the other hand, Devo has poor strike zone judgement.  I was surprised at how many bad pitches he swung at.  His career OBP of .319 supports my observation.

Tony Fernandez/Roberto Alomar:  The dream double-play-tandem of my youth, though I don’t get to see them turn one in this game.  No matter, it’s great just to see them play along side each other.

Galen Cisco: For an old man, he sure knows how to rock a stirrup sock.  This is how it’s done. Kids today: take note.

Danny Cox:  The right-handed Cox came on in relief after Dave Stewart gave up a 2nd-deck 3-run bomb to Lenny Dykstra.  Cox is just an awful pitcher.  He can’t repeat his delivery at all, often throws across his body, each pitch is laborious and thrown with max effort and all the while Cox has no idea where it is going.  Though he does have moments where he can throw an effective slider.  Cito – what were you thinking?  Wait, nevermind.  Cito has never been known as being adept at bullpen management.

Al Leiter:  The 28-year old (at the time) Leiter comes on in relief of Cox with ducks on the pond and stops the bleeding.  Leiter had been injury prone with blisters throughout his career and 1993 was really only his 2nd full season in the major leagues.  With that said, he exhibited incredibly poise for an inexperienced pitcher in a huge spot.  He was super-clutch cleaning up Danny Cox’s mess and the Phillies had no chance against his nasty slider.

Astro Turf:  The SkyDome’s field surface during this series is first-generation Astro Turf.  Concerns about the effect the hard surface would have on players’ knees led to an over-compensation in the sponginess/springiness of the turf.  As a result, the ball often takes silly hops that bound way too high into the air,  often resulting in infield singles.

Mitch Williams: Kenny Powers…err….Mitch Williams as a closer is laughable.  In the bottom of the 9th inning, in a 1-run game, a must win game of the World Series, Williams walks the greatest leadoff hitter in the history of the game in Rickey Henderson on 4 straight pitches.  Not a single one of those pitchers was anywhere near the strike zone.  Williams’ approach reminded me of one current Blue Jay:  Kyle Drabek.  The Tao of Stieb did a great job of describing what ails Drabek in this post.  The Tao’s description of Drabek mirrors what Williams did in Game 6:

… (his) delivery began to unravel, as he looked to be exerting a lot of extra effort throwing across his body.

From there on, you wanted to avert your eyes […] delivery becoming increasingly erratic and almost random from pitch-to-pitch.

His limbs flew about on each delivery like a shaken sock monkey.

Duane Ward: I always worshipped the ground that Ward walked on, believing that he was the preeminent closer. In this game, I was nonplussed after watching Ward’s slightly-above-average fastball.  It was not as explosive I remember and it was lacking any late life.  Granted, it was only one inning.

The bottom of the 9th Inning: As I mentioned above, my memory of this game is a little hazy.  The 9th inning, however,  is as clear as a bell.  The reason being, my Dad made one of the worst choices of his life.  With 2 on and 1 out, Joe Carter stepped to the plate.  Williams pitched ball 1.  Then ball 2.  At this point my father – who is a fiending chain smoker – decided that at this critical point in the game it would be a good time to venture to the concourse to have a cigarette (at this time smoking was permitted in the SkyDome in various smoking sections).  I remember saying to my father, “but Daaaaaaad! If Joe Carter hits a HR this game is over and the Jays win the World Series!”

There was no arguing with the nicotine Gods, and off he went.

Williams spun around and faked a pickoff move to second base.  Rickey Henderson weighed heavy on the mind of the “Wild Thing.”  Then Williams threw a strike.  Then another.  The next pitch, Carter swung and belted a deep drive over the left-field fence for a 3-run walk-off home run that won the game for the Jays, as well as the World Series.

It was pandemonium.  I remember at 12 years old, my mind was blown.  I had never seen anything like it in my young life and people were losing their minds all around me.  Looking back through this DVD, I was happy to see that the scene was just as I had remembered it.  Bedlam.  Incredible.  My Dad – who I had never seen run in my life – came running down the stairs with cigarette still in hand and we celebrated the greatest day of my life.

Post-Game Celebration: I couldn’t see anything at the time, being 5 feet tall while everyone was on their feet, so  it is good to have the opportunity to look back and dissect what went down.  Other than Carter himself, Willie Cañate and Juan Guzman are at the centre of the action and are the most enthusiastic revellers.

Molitor was running around giving teammates and coaches alike handshakes and hugs.  When he met Cito, they embraced for an extended period of time.  Cito said something in Molitor’s ear and immediately Molitor began to cry.  Following his brush with Cito he was extremely emotional.  I never really noticed before.  I wonder what it was that Cito said.

On Monday, October 31st, 2011  at 9:00pm  I’ll post a trivia question to our Facebook fan page.  Be the first one to answer the question correctly and you’ll win a copy of this DVD.  Good luck!

Dave Stewart was a Rule 5 draft pick by the Oakland A’s.  The Philadelphia Phillies removed him from their 40-man roster in 1986 to make room for Ron Roenicke.