At the beginning of spring training I consulted my crystal ball to see what lineup the Blue Jays would run out onto the field for the home opener. The projection ended up being pretty close to what materialized.

As for the starting nine, the only real surprise was wily manager John Gibbons’ decision to bat Curtis Granderson in the clean-up position the first few games, and then Yangervis Solarte. Gibbons is nothing if not unpredictable. As expected, Troy Tulowitzki was placed on the 60-day disabled list due to bone spurs.  Aledmys Diaz has filled in at the shortstop position. Diaz isn’t particularly good defensively, and as Blue Jays GM Ross Atkins commented, “Diaz must do his part with the bat or someone else will get a shot.” That someone isn’t going to be Gift Ngoepe. As much as I love the guy –  and I’m thrilled he made the opening day roster – he’s been over-matched and outclassed by major league pitching. If Diaz flounders, I expect to see Lourdes Gurriel – currently being groomed for a super-sub role in the mould of Ben Zobrist – before the much-ballyhooed Bo Bichette gets a shot:

If Troy Tulowitzki’s creaky body takes much longer to heal than anticipated, Lourdes Gurriel may make an appearance. If I’m not mistaken, Gurriel’s contract isn’t subject to the same service time issues as most minor leaguers because he signed as a free agent, though he may still be able to opt into arbitration. I don’t think Richard Ureña is an MLB calibre player; he’s minor league roster filler.
– Projecting The Toronto Blue Jays’ 2018 Lineup

Although Josh Donaldson started the game at third base, his alarming wet noodle of a right arm has forced John Gibbons to move him to the DH role; Yangervis Solarte will see time at the hot corner until Donaldson is able to remedy what ails him. 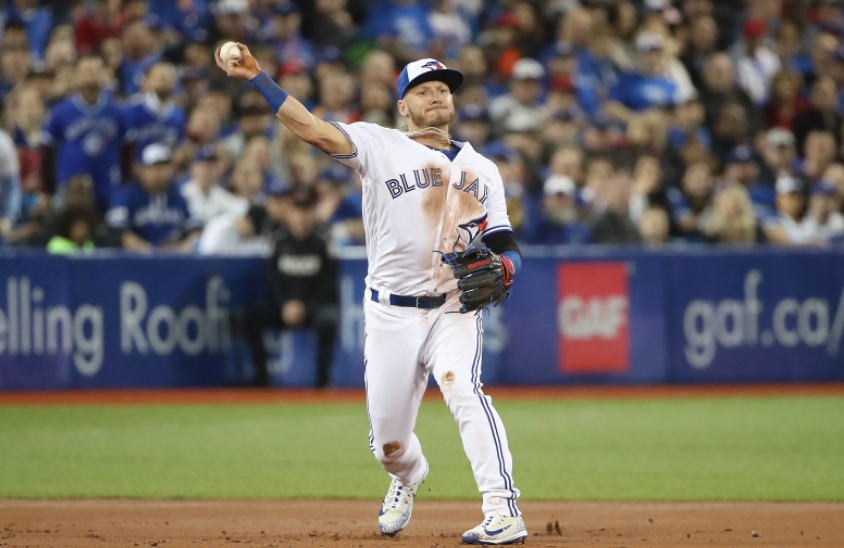 The veteran J.A. Happ received the nod for the opening day start because of Marcus Stroman’s early-spring shoulder inflammation, and the fact that the Blue Jays likely didn’t want to put too much “pressure” on Aaron Sanchez, having just recovered from blister issues. It turns out that it didn’t really matter who gets the start, as the Blue Jays were only able to muster a single run in the game.  So the rotation looks like this: Happ – Sanchez – Estrada – Stroman – Garcia. We may see a slight shuffle during the season to break up the two left-handed starters, Garcia and Happ.

The bullpen – the only real area of uncertainty for the team during the spring – turned out how I projected it, more or less.  I thought there would be a spot here for Carlos Ramirez, but he dealt with a shoulder injury for most of the spring and never really got a chance to prove himself. Unfortunately for Ramirez, he has minor league options remaining on his contract, so he was sent to Buffalo. Fortunately for the Blue Jays, non-roster invitee John Axford was dominant during his spring showcase, regularly flashing a fastball at 97mph. Axford made the bullpen and made an appearance on opening day, though he looked amped-up and quite nervous to be pitching in front of the sizable hometown crowd – he uncorked multiple wild pitches to Russell Martin during his warm-up. I anticipate Axford will be adequate now that he’s got the first-game jitters out of the way. It’s easy to forget that baseball players are human, just like us. Late spring free-agent signing Tyler Clippard rounds out the ‘pen. Bullpens are constantly in a state of flux, so one or more of these pieces may land on the disabled list or flame out altogether and be replaced by options internally. They include the aforementioned Carlos Ramirez as well as Luis Santos, Tim Mayza, Sam Moll, Al Alburquerque and maybe even Joe Biagini.

Where do we go from here?

We don’t know who, when, or how, but it’s coming – an injury to a member of the starting rotation. The pool of starting pitching depth took a hit when Thomas Pannone was suspended for 80 games for testing positive for performance-enhancing drugs.  The Joe Biagini-as-emergency-starter-plan came to fruition; he’ll be the first option called up from Buffalo when injury strikes. It’s not going to be good, but might be slightly better than Mat Latos last season. Deck McGuire, Taylor Guerreri, Sam Gaviglio, and Ryan Borucki are also in the mix.

As much fun as it was to see Bo Bichette and Vlad Guerrero Jr. in the spring, they’ve never played above high-A baseball. They’re scheduled to start the 2018 season at Double-A New Hampshire. These young men still need many reps and valuable baseball experience that the minor leagues provide before they are ready to play at baseball’s highest level. We will not see them playing at the Rogers Centre in 2018.

We will, hopefully, see the likes to Teoscar Hernandez and Anthony Alford again – though probably not at the same time.

Thankfully the Blue Jays do not have to play the New York Yankees every game. Assuming that Josh Donaldson returns to health and nothing catastrophic happens, this team is likely going to win in the neighbourhood of 81 games. While the Blue Jays’ starting rotation is among the best in baseball, the suspect offense, fragile infield defense, and patchwork bullpen are not where they need to be. An 81-win team is not good enough to snag a wild-card playoff berth, and not bad enough to net any high picks in the draft. Blue Jays President Mark Shapiro once said, “As we deliberate on the different strategies and the different directions to go, we feel an obligation to try to field a contending, competitive team and at such a time we feel that is not possible, we will pivot.” Will this be the year of the pivot?