10 weeks ago I consulted my crystal ball to try to get a clearer picture on what the Toronto Blue Jays’ opening-day lineup would look like.  The only difference between my projection and Gibby’s opening-day starting-nine was the substitution of Ezequiel Carrera for Melvin Upton and Steve Pearce for Justin Smoak.  Melvin Upton, as we all know, was released prior to the first game of the season.  Since that first game, Justin Smoak has wrested the lion’s share of first baseman duties from Pearce and Morales.

I openly confessed my view that Jose Bautista’s days in right-field were numbered due to his lack of range and severely diminished throwing arm.  With a month of the season behind us, Bautista has proven me wrong time and time again while racking up four outfield assists courtesy of his refurbished right-arm cannon.  As far as his arm is concerned, he’s clearly got the magic back. 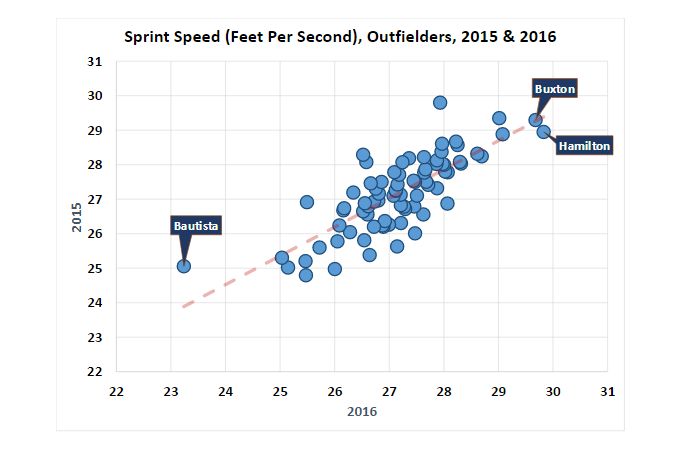 Of course, Bautista was overcoming a foot injury for much of 2016, but the downward trend across two years speaks for itself.

Moving on to the bench, the difference from my prediction to reality was the departure of Upton in favour of retaining utility-infielder Ryan Goins. In light of the injuries to both Josh Donaldson and Troy Tulowitzki, the decision to allocate a roster spot to the versatile Goins has turned out to be a stroke of genius for Shatkins.  According to our friends at Jays Journal, had Goins been exposed to waivers, he would have been scooped up immediately by another team. 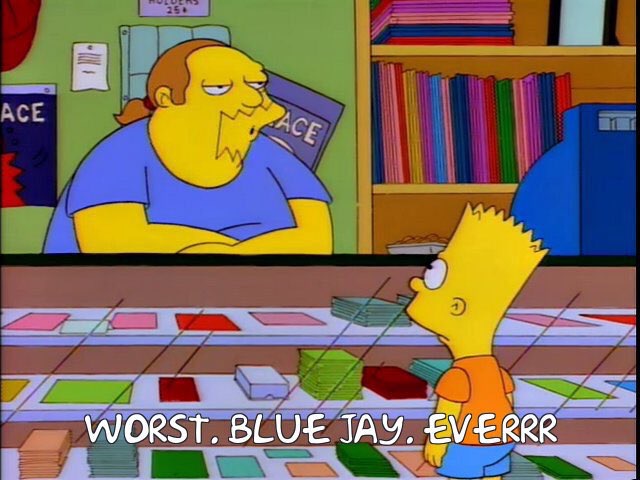 The starting rotation was the easiest of the five roster spots to pick, though manager John Gibbons switched up the order on me by giving Marco Estrada the opening day start.  It didn’t take long for the rotation to break down; the Blue Jays were forced to go to the AAA well following injuries to both J.A. Happ and Aaron Sanchez.  Before the season began, I wrote about the Blue Jays’ starting pitching depth and what would happen if Toronto sustained an injury to its rotation.  With Happ and Sanchez landing on the new 10-day disabled list, Shatkins called up Mat Latos and Brian Lawrence from AAA Buffalo, just like I said.  What smart guys they are! Really though, it has less to do with smarts and more to do with a complete dearth of options at the AAA level.  If yet another Blue Jays starter sustains an injury, the Blue Jays will look to either Mike Bolsinger or TJ House – two names that don’t exactly instill confidence.  Back when I wrote the piece, I mused that if a starting pitcher were to be placed on the disabled list for an extended period of time, the Blue Jays might entertain signing Doug Fister or Jake Peavy.  That would appear to be a less-likely option currently, especially since the team is nine games under .500 and it’s only the beginning of May. After Bolsinger and House, left-handed Brett Oberholtzer appears to be next in line for a call-up.

Finally, the bullpen.  With Bo Shultz’s elbow shattering into a million pieces, Shatkins reached into the mixed-bag of bullpen options and awarded the final two spots to a rejuvenated Aaron Loup and a surprisingly effective Ryan Tepera.  There hasn’t been a tonne of movement in the bullpen, other than a few pitchers (Danny Barnes, Dominic Leone) being shuttled back-and-forth between Buffalo and Toronto due to bullpen over-use.  Roberto Osuna appears to be over his neck injury and the Blue Jays sorely need him to be the 9th-inning anchor. Should any injuries occur, Barnes, Matt Dermody, Chad Girodo, and maybe even John Stilson are waiting in the wings.

Where do we go from here?

The Blue Jays’ abysmal April has tempered (read: crushed) pre-season expectations that this is indeed a playoff-contending team.  Players are beginning to show their age on the field (Bautista, Jason Grilli) and off of it (Troy Tulowitzki, J.A. Happ).  Expect the month of May to be an evaluation period and bellwether for where Shatkins will lead this organization philosophically.  If the Blue Jays can climb close to the .500 level by the end of May, I expect the team will stay the course.  However, if the Blue Jays continue to perform like they did in April, Shatkins will begin dismantling this team sooner rather than later in order to extract the most value from their tradeable assets.  Fans of prospect porn (that is, the dreaming-on and breathless discussion-of minor-league ballplayers): brace yourselves.  An influx of high-upside talent will be on the way to the lower-levels.