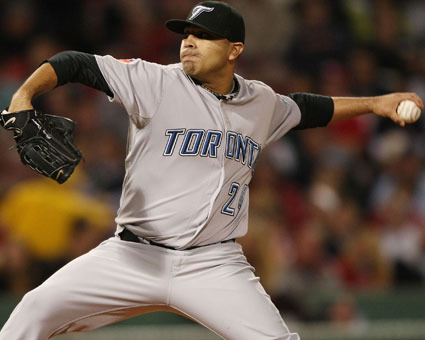 Quick Recap: Last night Ricky Romero made his bid for a no-hitter. It fell apart in the 8th. Scumbag A.J. Pierzynski clowned the umps into awarding him a HBP and came around to score on the lone hit, an Alex Rios 2-run HR in the 8th via pitch that was one of the few pitches even remotely up. Romero walked 2 and struck-out 12 over 102 pitches in 8 IP.

Cool Stats to Start Things Off

Simply put, his off-speed got the job done. White Sox hitters chased 55% of off-speed pitches. Ricky really worked his curve and change to both right & left-handed batters and also added in a slider to LHB.

Romero only faced 5 LHB last night and confused them with a mixture of four pitches.

Ricky’s best offering to RHB last night was his change-up. He threw it 25% of the time vs RHB. Amazingly the strike % for his change vs RHB was 80%. This resulted in many chases down, and down and away.

His change was used as a set-down pitch, as we threw only one change to a RHB to start off a count. Otherwise he led off with 65% fastballs and 30% curves.

He kept the ball down and hitters guessing. That, along with some amazing strike and chase percentages from off-speed offerings (mainly the change) led to Romero throwing one of the best games in Toronto Blue Jays history.