A plethora of sabermetric related articles around the web, brought on by Moneyball’s release and on this website by Callum’s uneasiness with Sabermetric statistics. To set the record straight, since I’ve yet to pen an article on the whole Sabermetrics vs regular stats argument, I’m firmly in the corner of sabermetrics, with one caveat, that is the saber stats themsevles being used within a proper context.

The problem is, proper context is rarely used. And one mathematically based measure or another never tells the entire story.

These days, when Saber stats are thrown about, the source of data is usually based upon a quick look at FanGraphs. With this in mind, fangraphs versions of WAR & FIP are used within this article.

Someone may quickly point to a players WAR and move on. This can be problematic. One really needs to look at six or seven different stats to get a better idea in regards to whats going on.

Ricky Romero‘s FIP & WAR (which is based entirely on FIP) is a perfect example of the need to look at multiple statistics. From purely an FIP standpoint, Romero has regressed dramatically from his 2010 season, to the tune of around 0.50 FIP runs, entirely on account of increased HR/9, as his K – BB rate has ever so slightly improved.


This accounts for Romero’s fan graphs WAR witnessing a dramatic drop from 4.0 in 2010 to 2.9 this season

An improved strand rate is one of the key drivers in Ricky’s vastly lower 2011 ERA (2.98 vs last years 3.73). Last season his LOB was slightly below MLB avg at 70.2%. This season he’s near the top of the league at an 80.0% LOB rate. It would be easy to dismiss LOB gains as unsustainable but if Ricky has really turned into an ‘elite’ pitcher, then the 80% rate, while a little high, isn’t astronomical. Pitchers such as Cliff Lee, Halladay, Kershaw, Lincecum, Weaver, Lester, etc are typically around the 76% – 79% ratio. Above league average but then again, these are above average pitchers.

Last season Ricky threw around 60% combined FB + Cutters. This season the rate has jumped to 70%. His average velocity has also creeped up over 1 MPH. Whether this ties into FIP is debatable. However it does shed some light on Ricky becoming a different pitcher in 2011. 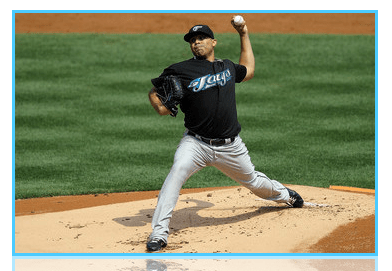 Previous LD% were right around league average at  18-19%. This season Romero has one of baseballs best LD% rates at 14.1%. In turn, his FlyBall% has risen, while his GroundBall rate has remained constant. Essentially he’s replaced Linedrives with flyballs, a worthy trade-off for any pitcher. Romero has allowed 9 more HR than last season but I would argue that the lower LD% equates to lesser contact, which in turn helps aid #1 on our list, LOB%.

Has this exercise answered anything? Well yes and no. The Jury is still out on whether the 2011 version of Ricky Romero is improved (as ERA and, to be frank, regular Jays fans would suggest), has declined (as indicated by WAR or FIP), or has remained constant. However, one thing is for sure. Citing specific sabermetrical stats in a manner such as “he’s got a ‘insert number here’ WAR” is far from the entire story. It’s really a chapter at best.