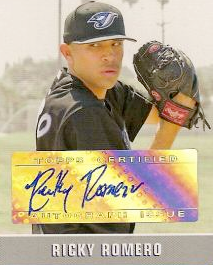 It seems like a few kind words from scouts and a few professional internet journalists have swayed public opinion on Romero. J.P. has also been turning on his usual spin cycle. Now across traditional and internet media Romero is considered a reformed prospect and a realistic option for the Jays 2009 rotation.

Romero is too hittable and gives up too many free passes. Over the past two seasons he walked over 4 hitters per 9 and gave up over 9 hits per 9. This obviously explains the 1.47 career minor league WHIP. This won’t fly at the MLB level.

He’s still young, so I’m not abandoning all hope. But if Jays fans or the front office expect anything below a 4.50 ERA and a 1.40 WHIP in 2009 I frankly think they’re kidding themselves. And this is were the problem lies. Say what you will about AJ but he still ate up 221 IP in 2008. This will need to be replaced. Marcum & McGowan add more IP. Now additionally factor in A) moving bullpen arms into the rotation and B) possibly continuing to use high BB pitchers such as Purcey and we can see were having a pitcher such as Romero can add extra burden onto an already taxed 2009 Toronto Blue Jays bullpen. Romero has done nothing during his minor league career to earn a shot at cracking the 2009 rotation. If he was a 6th round pick instead of 6th overall I doubt he’d even be mentioned for a roster spot.