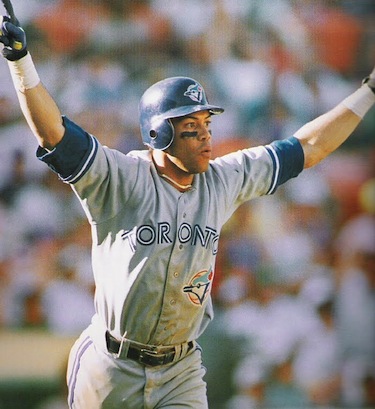 Roto 500 (created by Ron Shandler of BaseballHQ) is an experimental fantasy model, a hybrid of auction (each team gets a combined three ‘steals’  or toppers’  during the draft) and snake format drafting, an altered 4×4 scoring format and a 40 man roster (23 active, max 17 reserve) mixed league, with an overall budget of $500 and playing under 5-15 keeper rules.

Essentially, outside of the the ‘steal & topper’ draft picks (players that were bid upwards), the final price of players was a two year average of their production, rounded up if need be. For example, someone like  Jose Bautista had a pedestrian 2009 ($6) and an amazing 2010 season ($39), making his price $23 in the 2011 draft

The $500 budget wasn’t a factor for any team during the season, as most teams spent over $400 at the draft. This left most with only 15 – 20% of their payroll for the free agent market, but competitive bidding for the most part was sparse. Most players could be purchased in the FA market for $2 – $5. The trading market in the league was minimal at best, with about only 5 trades league wide throughout the season.

I would estimate that most teams lived and died by their draft rosters, with a few injuries and under performers replaced via the FA wire.

Traditional categories played out as expected, although I really enjoyed the OBP & Net Run aspect of the league. The beatuy of OBP instead of average is the simple fact that you can’t hide weak plate appearances. For example, players that walk represent a great value. Take Jose Bautista. His .302 batting average is great in regular fantasy leagues that use average but it only counts over 513 at-bats. In OBP format, teams get credit for his outstanding .447 OBP over the seasons entire  655 Plate Appearances.

The OBP / Net Runs considerations take on a new meaning. Are the 5 net runs that Will Venable scores in a week enough to off-set his lowly .302 OBP? These are questions that owners have to ask (and I’m sure some calculated) throughout the season. 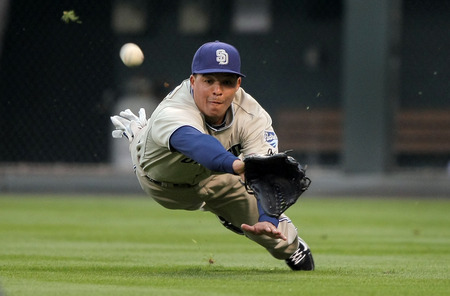 Over on the pitching side, the Net Saves Category really opens up a leagues pitching depth. The 20 something hold middle reliever has little value in standard mixed fantasy leagues. In Roto 500 his value ends up being a portion of a closer that nets 30ish saves. This creates depth and requires more research and finese from league owners.

The Toronto based ”Roberto Alomar Classic League” was the first of two leagues (the other based in New York) and included some members of the media, baseball websites and hardcore fans of the sabermetrical Baseball HQ community. 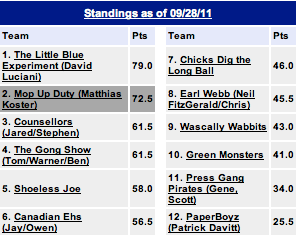 I was guilty of underspending in the early rounds, hoping to save some cash for the free agent bidding system (FAAB). While draft dollars ending up being far more valuable than FAAB bucks, luckily underspending didn’t sink my season.

Towards the later half of the draft rival owners were loading up on keeper rookies. Rookies carryed a price tag of $10, which was a little too rich for my blood. I focussed on picking up value plays, guys expecting to earn at least 300 at-bats. In this time I picked up contributors Jarrod Saltamachia ($1), Josh Willingham ($13), Ty Wiggington ($3) and flame outs including Fausto Carmona ($4), Phil Coke ($3) and Russell Branyan ($9).

I did not take part in any trading, although Free Agents produced for my club throughout the season. I rode Travis Hafner & Todd Helton for some cheap OBP & Net Runs. Marlins such as (at the time) under performing Emilio Bonifiacio & Javier Vazquez were a great boost and some of baseball’s better second half performers. Down the stretch Nick Hundely and even R.A Dickey produced.  As for rookie keepers I was able to nab both Jason Kipnis and Matt Moore off the waiver wire earlier in the season. 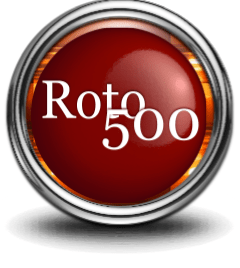 The net saves category ((saves+holds)-(blown saves)) came in handy for my club. I received value from Venters & Clippard for most of the season and their combined 180+ innings, low ERA and close to 200 K helped me out tremendously. Probably my #1 error of the season involved David Robertson. I drafted him with about 5 rounds to go for $2. And then I dropped him 2 weeks into the season. My assumption was his depth chart placement (between 3 & 4 at the time) would limit his hold numbers. And thus I dropped the likely #1 rated reliver in the league, as Robertson posted over 30 net saves with a sub 2 ERA and 100 strikeouts.

Coming out of the draft I was very pleased with my top 5 rotation, which included Hallady, Josh Johnson, Buchholz, Ian Kennedy and Colby Lewis. Needless to say, Doc & Kennedy held up their end of the bargain. Lewis regressed by about 30 strikeouts and 0.80 ERA. Injuries all but whipped out Johnson & Buchholz for 65% of the season.

Some sleeper picks, including a $4 Brandon League and a $1 Kyle Farnsworth helped me weather the storm, as did FA Vazquez.

In total I ended up 2nd in net saves, 3rd in ERA and towards the middle of the pack in wins (tied 7th) & strikeouts (8th)

The format added value to slash and dash hitters, as someone like my $29 Michael Bourn was a three category contributor, posting above average net runs ((runs + rbi – (HR)), steals and OBP. Brett Gardner fell into this category, as did mid-season pick-up Emilio Bonifiacio. I was expecting a bounce back season from Aramis Ramirez ($7) but he plesantly outproduced expectations. Berkman, Bruce, Pujols & Willingham provided some power and I was able to plug-in the gaps with free agents.

The mixture of HR+OBP players along with a few speed demons helped propel my club. I excelled on this side of the ledger, collecting 41 out of a possible 48 points. I finished 5th in HR, 2nd in Net Runs, 3rd in OBP and 1st in stolen bases.

I’m extremely happy taking 2nd place in my first experts league, losing out to nearly season long leader David Luciani of the Baseball Notebook. While I haven’t formulated an exact plan of attack, as some rule changes are on the horizion, I feel good about my keeper status (the league provides 5-15 keeper slots) if/when the ‘Roberto Alomar Classic’ holds a 2012 season.

I have to admit, I now prefer the roster management & scoring categories of the Roto 500 format to that of standard roto. The baseball world has already shifted to Sabermetrical Statistics and even the proliferation of WAR has made everyone more value & budget conscious. Going forward I’ll still jump into a casual standard roto league here and there but my attention will most certainly be focussed upon Sabertmetrically slanted leagues such as the Roto 500.