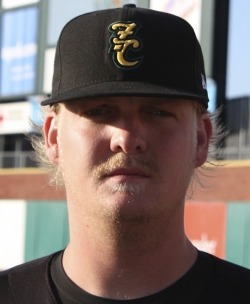 So it looks like the first of possibly many bullpen shuffles has taken place and the Jays brass have freed stud Josh Roenicke and called up an ominous character known as Rommie Lewis.

The 6’5″ 230 lbs Lewis was Baltimore’s 4th round pick (113th overall) in the 2001 draft. After working his way up to AA Bowie, Lewis was invited to Spring Training.  It was there that his passion for the game of baseball mysteriously vanished and his passion for delivering pizzas overwhelmed him.  He took a job at the local Pizza Hut.  He says he “didn’t want to be there, didn’t want to show up, didn’t want to play baseball. I hated it. I let the rules and regulations get to me. I was miserable. I just wasn’t having fun, and baseball’s all about having fun. If you can’t have fun, you’re not good to your team, you’re not good to your organization, you’re no good to yourself. So I had to step away.”

It sounds a little to me like Zack Greinke syndrome.  The Baltimore Orioles placed him on the restricted list and Lewis partied and delivered pizzas for a year. It was then he had an epiphany.

Lewis contacted Bowie pitching coach Scott McGregor and Farm Director David Stockstill to facilitate a return to the game.  Lewis then spent 2006 with high Class A Frederick, going 5-3, 2.09 with six saves in 52 innings. He didn’t allow a run in 12 of his last 14 games.

This past Spring Training in Dunedin, the Blue Jays coaching staff were impressed with his composure on the mound and the way he pitched.  In 6.0 IP Lewis racked up 2 saves and gave up only 3 hits.  Primarily a sinkerball pitcher, Lewis throws 4 pitches for strikes.

Bowie manager Bien Figueroa had this to say about Lewis:

As a former pizza boy myself, it is heart-warming to see one of my breathren’s dreams come true.  We all fantasize in the car while delivering pizzas of leaving the pepperoni behind and pursuing our big league destiny.  Is Lewis in danger of the glamourous pizza delivery-boy lifestyle luring him back in?

“Delivering pizzas is fun,” Lewis said, “but it’s nothing like baseball.”