The first in a small series of posts: Rookie Reviews

Over the next two weeks I’m going to take a look at Toronto Blue Jays rookie batters, their 2012 MLB campaigns and point out any glaring weaknesses or strengths.

The majority of Jays rookies have extremely small sample sizes, so please take everything with the standard grain of salt.

I’m going to cheat with this post by throwing out Gose’s first MLB stint, which resulted in a .499 OPS & .228 wOBA. Why? Well, the ‘official’ story regarding Anthony is two-fold:

In his first callup, consisting of 28 games, pitchers quickly discovered that Gose, a left-handed batter, could be had with a steady diet of breaking pitches. When he started hitting the occasional curveball, they found he was also vulnerable to well-placed fastballs.

He stood fairly erect in the batter’s box with his hands relatively low. Manager John Farrell said Gose needed “to get the timing of his hands in synch with his lower half more readily.”

“The hand placement in his stance was a little bit lower and [his hands] didn’t have the rhythm needed to get to the point of contact on time, particularly against above-average velocity,” Farrell said.

“You’d see a lot of foul balls over the third-base dugout. That’s an indicator that he’s late getting started.”

The following statistical and graphically review uses stats amassed from September 4th until the end of the 2012 season.

As a LHB, one would expect there to be a drastic difference in Anthony’s splits. However, at least during this short sample, Balls in Play, BA, and SLG splits are similar vs LHP & RHP:

Groundball Observations: All singles (light blue box) are the opposite way, none are pulled 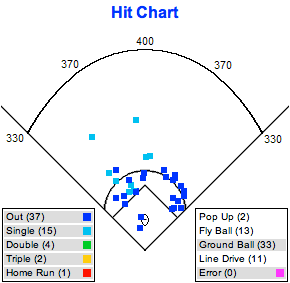 Flyball Observations: Not getting around on hits to the OF, everything minus his BOS HR and a triple are hit the other way. 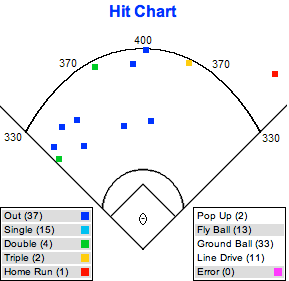 Linedrive Observation: Same old story. Notice the clump in LF; I imagine OF positioned him in this fashion, thus only the 50% success rate near the LF line. 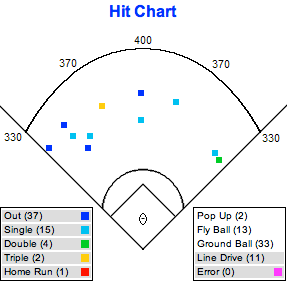 Notice the large rate difference between fastballs and anything off-speed (particularly curves & sliders):


Gose remains true to the prospect ‘book’; incoming rookies are able to handle fastballs, and must prove to opposing MLB pitching staffs that they can hit off-speed pitches. 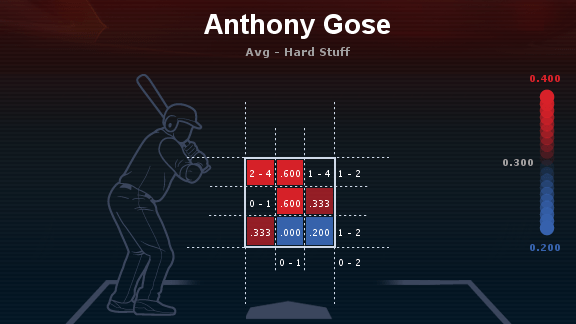 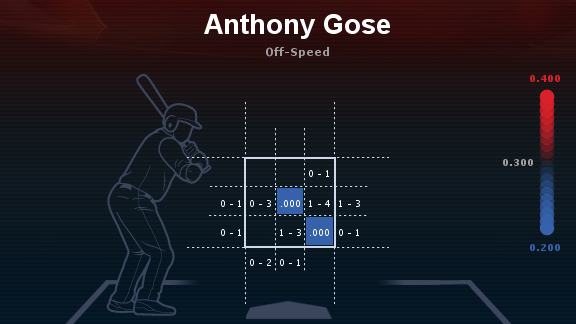 The Jays would be wise to keep Gose in the AAA international league for at minimum half a season, if not the full year, in order to adapt to various forms of breaking balls. If you’re a believer in WAR (and particualarly the base running and fielding components) you might be saying– “Hey, Gose posted 0.6 WAR in only 56 games last season, he could contribute 1.5 – 2.0 WAR a year at that rate”.

Maybe… but ultimately the Jays would like to see 4.0+ WAR a season from Anthony. Taking a short-term loss in terms of 2013 WAR by sending Gose to Buffalo for a longer-term gain is the prudent play and one I expect the Jays brass to make out of spring training 2013.