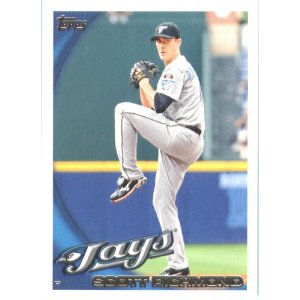 Scott Richmond is on the comeback trail.

The 29 year-old began the season on the 60 day DL, following shoulder impingement during the spring. He began taking anti-inflammatories and rehabbed the injury up until the start of this month, when he joined high-A Dunedin.

The key for Scott is most likely fastball command and overall curveball “feel”. I originally assumed Scott would receive the Jesse Litsch treatment, which is jumping from Dunedin directly up to Las Vegas. However the plan is three starts in Dunedin, then a stint in New Hampshire and finally a call-up to LV.

Once deemed healthy Scott should rejoin the Jays in a bullpen capacity, eventually jumping into the rotation once an injury or ineffectiveness begins.

Richmond’s shoulders issue dates back to July and has been pointed to for his poor performance in the latter portion of the 2009 season. However, I wonder if Scott’s in Cito’s doghouse after reading this quote after Richmond’s final start of 2009

“Richmond pretty much struggled for three months. Tonight was no different…He had problems locating his fastball. He has to make sure to put guys away. He didn’t get it done.”