Emilio Bonifacio’s game can be summed up in one word:

That’s it. If/when he losses a step he’ll be out of baseball. A bold statement? Of course– but I think the data that I’m about to present below will back it up.

Note: For this review I’m going to frequently mention percentile ranks. Obviously a rank such as 60th percentile is above average , 30 is below average, etc

Emilio missed roughly half of the regular season via three DL stints; the first two dealt with a thumb injury, the third, a ‘shut down’ 60 day DL injury was due to right knee soreness. He is expected to be 100% for spring training.

As expected with only 1 HR during the season, Bonifacio ranked near the bottom of the MLB with a 2.2% HR/FB ratio (8th percentile).

His flyball rate of 23.6% is in the 5th percentile. This puts him in the same realm as speedsters such as Juan Pierre, Elvis Andrus, and Everth Cabrera.

His average flyball distance of 258 (17th percentile) confirms his lack of power. Thankfully Bonifacio realizes his lack of power and tailors his game around groundalls and bunts.

His 61.5% GB rate is 96th percentile, and once again fits in comfortably with similar speed based players such as Andrus, Pierre, etc.

When he’s able to put the ball into play his speed is DEADLY. He has a .349 BABIP on Groundballs!! That’s nearly unheard of, ranking 4th overall in the MLB. The MLB average is a mere .240.

Despite playing only about half a season, he ranked 30th overall in the MLB bunt attempts, with 15. The co-leaders (Ayber/Pierre)had 36 attempts in 2012, a number which Bonifiacio reached in 2011

Bonifacio sees, on average, 4.22 pitcher per ab, putting him in the 94th percentile and subsequently 27th overall in the MLB (for reference, Jose Bautista ranks 13th with 4.27 pitches per ab)

Pitchers are wising up to Emilio’s count working strategy , which in turn has led to very high ‘cookie’ rates, including 35% of all pitches to Bonificiao are in the vertical middle portion of the plate (97th percentile). 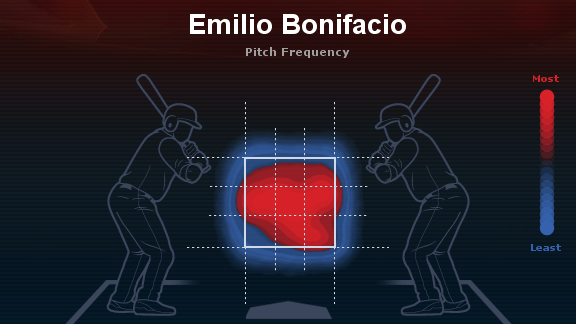 He also receives 61.1% fastballs, once again a 97th percentile rate. Basically he’s treated like a pitcher at the plate. This is due to his laughable ISO rate of .057, the sixth poorest rate in the MLB.

These stats back up my assertion at the top of the article: his success is speed based. Once he losses even a fraction of a step I expect to see his GB BABIP take a hit. Luckily the Jays are essentially on a year-to-year contract with Emilio through his arbitration years.

The OBP is 3rd percentile in the MLB, below even Colby Rasmus’ .262 rate. Even his BABIP takes a direct hit vs LHP, settling in at .286. And before we get ahead of ourselves & think of an obvious platoon at 2B, Maicer Izturis has similar suckage rates vs LHP; .231/.259/.244

86th percentile OBP, .341 BABIP. Emilio is a player that should ditch switch-hitting and instead focus on batting from the left-side.

From a sabermetrical standpoint, Emilio’s D is below average across the board, whether it be in the infield or outfield. This is somewhat off-set by his position flexibility. If sabermetical stats are to be trusted, his range at 2B is below average, but his ability to turn the DP hovers around MLB average. On the bright side, he can play 3B, SS, 2B and any OF slot.

Where does this leave us? I have to admit, I assumed Bonifacio was a better offensive player before running the numbers. I’ll jump into an Izturis breakdown in my next post but before running numbers the most likely scenario is Bonificiao vs RHP at 2B, Izturis & his better D vs LHP.