Maicer Izturis shares many similarities to Emilio Bontificio at the plate. Both Maicer & Emilio are:

With that being said, both players excel at one phase of the game– Bontificio steals more bases due to a high SBA (stolen base attempt percentage) & Izturis has a statistical & anecdotal track record as being a plus defender, as well as a clubhouse leader.

He plays very good defensively, as well, and is a good teammate, good in the clubhouse.” Alex Anthopoulos, AP, 11/08/12

Izturis at the plate

Note: Unless noted, stats are from 2012 season 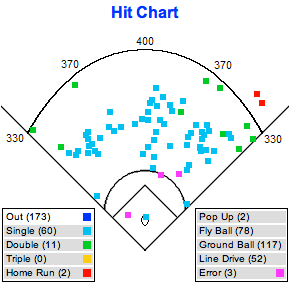 Hit chart displays his lack of power. He’s a ground ball hitter that can spray the occasional linedrive. But his ISO (.059) is so low that he posses no real threat to opposing pitchers (11 doubles, 2 HR in 319 PA). Past season ISO rates were a shade over .100, which once again is hardly setting the world on fire.

Unlike Bontificio, a player that can reach base via infield singles, Izturis collects most of his ground ball hits by sneaking balls past infielders.

Here are two small images collecting stats from 2011 & 2012; The first is Bontifico’s infield hits (blue in a single, purple are ROE), followed by Izturis hits.

Maicer’s statistics back up the hype–he’s a strong contact hitter that is near the top of the MLB in terms of contact rate (95th percentile) & in-play percentage (92nd percentile). This translates into a strong 38 K vs 25 BB ratio in 319 PA. 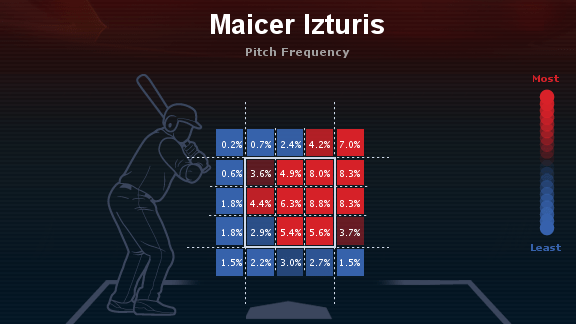 Pitched up in the zone 38.9% of the time. This is in the 97th percentile, which similar to the way Bontificao is pitched. The list of MLB hitters that are pitched ‘Up’ consists of mostly light hitters and those with speed that opposing pitchers likely do not wish to walk.

Note: This is a general assumption that I will look into later in the off-season 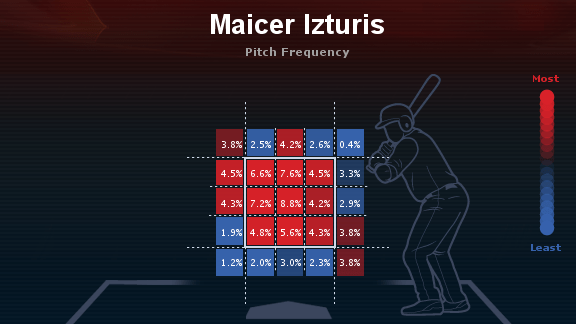 If advanced defensive metrics are to be trusted, Izturis is a plus defender across the infield (2B, SS, & 3B).

Outside of a poor 2011 season, Maicer has been above average across his career at second base.

I enlisted the help of Hudson Belinsky,  (@hudsonbelinsky), head writer at  of Halos Daily and a contributor to Baseball Prospectus.

I posed the following two questions/statements:

Q1: I don’t have any concrete numbers regarding the upcoming assumption –But I have watched a number of Angels games over the years and it appears that Izturis’ primary job at the plate (and on the diamond in general) is to hit & run, sacrifice, move runners over and be flexible on defence.

Answer: Izturis is a strong contact hitter. He won’t swing and miss often, but the contact is always pretty. He can bunt and move runners, and he has a decent amount of speed, so he is a threat on the basepaths. He isn’t Rajai Davis or Anthony Gose, but he can get in a pitcher’s head.

Q2: Also, while statistically his D appears to be above average, I seem to recall seeing numerous flubs/mental errors from watching Angels games? Is this the case or am I imagining this?

Answer: Defensive isn’t really an issue for Izturis. He seemed to have lost a step in 2012, but he’s still capable of solid-average defense in the infield. His mental errors are no worse or more common than normal. Izturis shouldn’t win a Gold Glove at any one position, but he might be a Gold Glove utility infielder, if that makes any sense.

Maicier Izturis is a capable utility infielder that can play plus D, swipe a bag, and get on base at an above average clip. This combination has translated into a career average of 2.7 WAR per 600 PA

Personally, I’d like to see the Jays go into a match-up type platoon at 2B with Izturis & Bontificio–Giving Maicer the start when the Jays send a GB pitcher to the mound, and Emilio the nod when playing against a favourable SB catcher or pitcher match-up.