With the Toronto Blue Jays’ rotation in total and utter disarray, General Manager Alex Anthopoulos has gone into “scrap heap mode” – that is to say he is desperately plucking arms from the Major and minor league garbage dumps.  One man’s trash is another man’s treasure, and all that.  Jamie Moyer was given to the Blue Jays freely from Baltimore’s AAA affiliate.  Shawn Hill was purchased from the independent Atlantic League.  Sean O’Sullivan was acquired in a minor-league deal.  Sam Dyson was called up from Vegas to replace Scott Richmond, who was up to replace Carlos Villanueva as the long-man in the bullpen.

From Gregor Chisholm’s MLBlog North of the Border:

“Right now, what’s clearly happened is that we’ve taken everybody from Las Vegas. It’s hard to replace those guys during the season. We’re not in a position to be selective. There’s no question from a trade standpoint we can be but, for example, the Sean O’Sullivan deal was a minor-league deal. We need somebody for New Hampshire or Las Vegas.

“With all these injuries in a short period of time, it’s hard to replace all those innings. It impacts the minors at every level. Everyone starts to move.” – Alex Anthopoulos

It’s clear that the in-house options of Tim Redding, Bill Murphy, Joel Carreno, Jesse Chavez and Robert Coello can not be counted on.  Jamie Moyer couldn’t hack it in AAA Las Vegas. Shawn Hill is a classic five-inning pitcher. With a bullpen in tatters and running on fumes, the Jays need something more.

Speaking of the bullpen, all of the candidates from the Blue Jay bullpen have joined the starting rotation:  Carlos Villanueva and Aaron Laffey.  What then, are the Blue Jays to do?

While Blue Jays have been out looking for pitching, they’ve been telling teams they can’t take on any money. Hard to find it that way.

Since the Blue Jays are loathe to take on any money, pitching options at the Major League level become extremely limited.  If a team is not going to eat dollars, then it had better ship some prospects; we know that Anthopoulos is not willing to part with minor league assets.  This is a fair point:  why mortgage the team’s future to patch up a rotation for a team that may (but probably won’t) make the playoffs?  With members of the staff leaving the infirmary later this year, those assets would be used best to add the final touches to a legitimate playoff-contending team next year.  Sigh.  I know.

This week Blue Jays manager John Farrell spoke with Jeff Blair and the Drunk Jays Fans transcribed what Farrell had to say:

“I think that a starter would go a long way,” Farrell said, echoing what we’ve all been basically thinking, “and if we had the ability, and the market provided two, I’d even go as far as saying that two could be used, or could be needed. Particularly, as you mentioned, the dependability of six to seven innings every night out allows you to bring guys from the bullpen that are rested. Because, here’s the thing, Jeff, we’ve got 80 games remaining. We’ve got 54 that are in the AL East ahead of us. Two of the best offenses in the game are among those, in Boston and New York, so we know that while we sit here two games over .500, two-and-a-half games out of the Wild Card, we have got a tough road ahead, and we have got to not only perform at our best, but in some cases we might even need some reinforcements.”

Of course, we want to watch the most competitive team possible and not be the embarrassment of the league.  My sense is that Jays fans are frustrated at the acquisitions made by the Jays and think that the team can do better.  I had a look around the league to see what possible candidates would fit the Blue Jays constraints while improving the rotation this year.  The following is a list of potential scrap-heap reinforcements that the Blue Jays should (or shouldn’t in some cases) take a shot at in order to plug this leaky rotation.

Let me preface this list with a primer:  in my mind, the Blue Jays should be searching for a very specific type of pitcher.  He needs to be able to eat innings because the bullpen is not doing much better than the rotation at this point. They need a breather. He needs to throw strikes, and most importantly, he needs to limit walks.  Why?  Nothing takes the wind out of a team’s sails faster than walks.  As Satchel Paige used to say, “Bases on balls is the curse of the nation.”  It is maddeningly frustrating for the fans and all of the players on the field.  Besides, the Blue Jays have a terrific defense – why not use it?   Now on to the list. 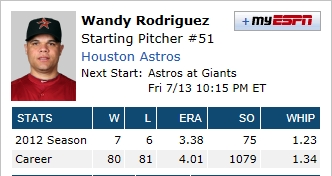 It was reported on Canada Day that the Blue Jays have sent multiple scouts to view at least two of Wandy Rodriguez’s starts.  Could he be the shot in the arm that this Blue Jays rotation desperately needs?

#BlueJays showing most interest in pitchers under control beyond this year. Matt Garza and Wandy Rodriguez high on their list, sources say. 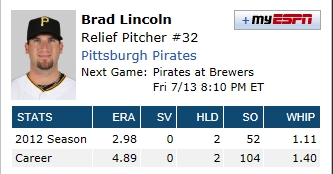 Brad Lincoln, like Carlos VIllanueva, is a pitcher ideally suited to a starting rotation because he has an effective four-pitch mix.   Lincoln has a 95 mph fastball, a curveball with a hard break, and an average changeup that keeps hitters off balance. The Pirates have bounced the 27-year old Lincoln from the bullpen to the starting rotation and back again.  With a starting rotation 1-5 of AJ Burnett, Erik Bedard, James McDonald, Kevin Correia and Jeff Karstens, it appears there is no room for the right-hander. This is a potential opportunity for the Blue Jays.

Lincoln was drafted in 2006 ahead of the likes of Tim Linceum and Clayton Kershaw.  If there’s one thing we know about Blue Jays GM Alex Anthopoulos, it’s that he loves fallen, former high-profile talent.

Verdict:  Depending on what the Pirates’ demands are, this is possible.  The only thing I see that could hold up this acquisition is the fact that other GMs know that the Blue Jays are vulnerable and may try to take advantage of that fact by asking for too much.  Another plus for Jays fans?  Brad Lincoln has already had Tommy John surgery.  That’s not to say he won’t need another one, but here’s hoping… 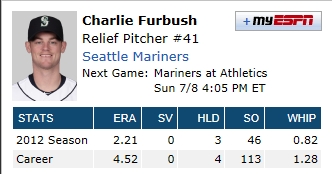 With 4-5 pitches in his arsenal, Charlie Furbush is another relief pitcher who is being under-utilized in the bullpen.  In 36 innings this season, Furbush has struck out 46 while walking only nine.  Of course, this has been in a relief role; last season Furbush posted a 6.62 ERA as a starter.  With that said, Furbush has been a starter all his life, so the role would be nothing new to him.  Last season as a starter at AAA Toledo, Furbush struck out 61 in 54 innings while walking only 16 in nine starts.

Verdict:  Not likely, unless Furbush is included as part of a creative, Anthopoulos-esque trade in which there are multiple players moving to multiple teams.  In addition, Seattle might be gun-shy after the Brandon Morrow-for-Brandon League fleecing.

A 27-year old right-handed pitcher,  Yusmeiro Petit is currently playing for the San Francisco Giant’s AAA affiliate in the Pacific Coast League.  Signed as an international free agent by the Mets in 2001, Blue Jay fans might recognize this name because he was traded for Carlos Delgado in 2005 (along with Grant Psomas and Mike Jacobs).

Petit hasn’t had much success in the Majors; he’s got a 5.57 career ERA in 229.1 IP.  With that said, he’s just entering the prime of his career and he’s putting up good numbers in the PCL – a pitcher’s hell on earth.  In 104.2 innings he’s struck out 99 while walking only 25.  Even more impressive? He’s only given up six long balls.  There’s no way Petit is going to crack the Giants rotation of Lincecum, Bumgarner, Cain, Zito and Vogelsong, so he’s expendable and shouldn’t cost much.

Verdict:  Petit is the perfect candidate to join the Jays.  This is a low-risk, low-cost type of move that Alex Anthopoulos loves.

The former 2nd round draft pick of the San Diego Padres is now plying his trade with the Miami Marlins, having recently been called up.  LeBlanc is another career starter who is currently being used in a relief role.  He’s a lot like Yusmeiro Petit in many ways: he leaves hitters baffled without lighting up the radar gun. Although his fastball rarely touches 90 mph, it’s a good enough pitch to set up his changeup, which is an absolute monster and among the best in the minor leagues.  The problem with LeBlanc is that he’s primarily a two-pitch pitcher;  his curveball, while it fools hitters with its late break, is a pitch that Wade struggles to command consistently.

Getting down to brass tacks, at AAA this season LeBlanc has struck out 91 in 98 innings while only walking 20.  His home run rate is reasonable; he’s only allowed 10 in those 98 innings.  He also averages 6.1 innings per start.

Verdict: There’s room for only one soft tossing left-hander who relies on a changeup in the Blue Jays rotation.  That spot is filled by Brett Cecil.  Is Wade LeBlanc that much of an upgrade over Cecil that a deal needs to be made?  Probably not. 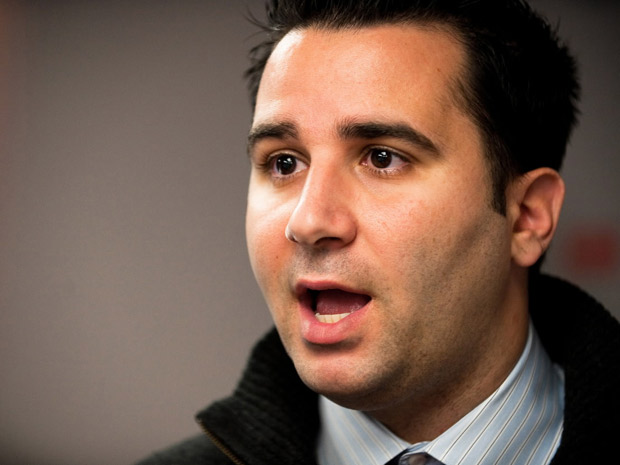 After scouring the Majors, minors and independent leagues for candidates to join the patchwork Blue Jays rotation, I earned a better appreciation of how difficult it will be for Anthopoulos to plug holes while adhering to his constraints.  With Brandon Morrow due back within a month or two and Carlos Villanueva pencilled into the rotation until the end of the season, it’s really not worth it for the Jays to deal mid-to-high-ceiling prospects for players who may or may not help the Blue Jays contend this season.  It’s an unfortunate reality that a slew of injuries has decimated both the Blue Jay bullpen and rotation, effectively removing a contending team from contention.  The fact of the matter is that innings need to be eaten and these scrap heap arms will eat them. The arms I found don’t represent much of an upgrade to what the Blue Jays already have now.  There’s hardly one pitcher out there that would fit, let alone two. The right course of action is to “stand pat” until the off-season.  It is then and in 2013 that the Blue Jays will be able to extract maximum value from their assets in order to become a team that plays meaningful baseball in October.

Images courtesy of ESPN.com, MiLB.com and Aaron Vincent Elkaim for the National Post.