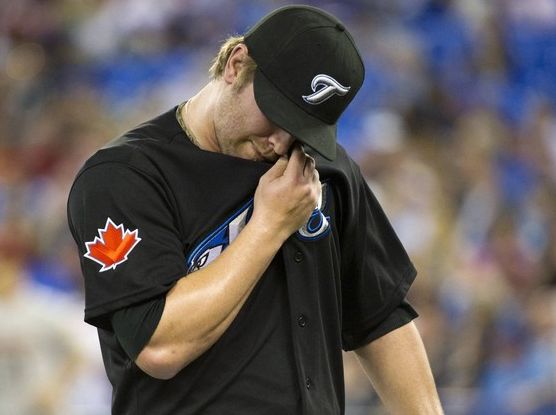 The young pitching phenom can not throw strikes anymore.  He needs to be sent down to the minor leagues and this is why: 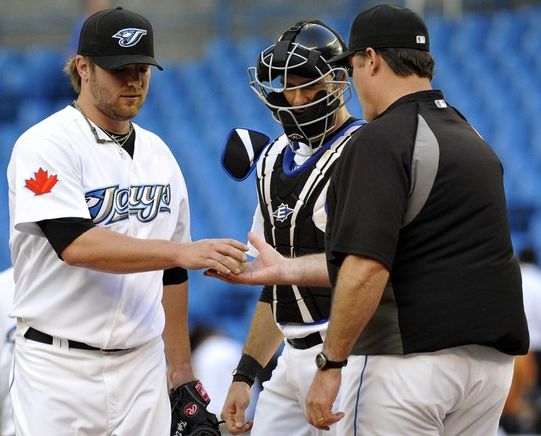 Last night was the proverbial crossroads in Kyle Drabek’s development as a pitcher.  In his own words, it was the worst game of his life.  Drabek left after 2/3 of an inning and 38 pitches.  He opened the game by allowing back-to-back doubles before walking 3 straight Cleveland Indians hitters.  Therein lies the problem.

Right now? No.  He hasn’t been hitting his spots all season.  In fact he leads the Majors in bases-on-balls with 45.

Drabek – who’s thrown 63-1/3 innings – has a strike rate of 54.8%. Meaning that Drabek is on pace to post the lowest strike rate of any regular starter over at least the past 12 years.

Once again, Farrell said the 23-year-old right-hander’s biggest enemy is himself — “controlling his emotions and continuing to trust his stuff.”

“I believe in my stuff,” Drabek said. “I just can’t hit my spots right now.”

Frankly, I don’t believe him.

All one has to do is look at Drabek’s body language.  He is an emotional mess on the mound.  The thing with Kyle is that he has such outstanding stuff but he will do anything in his power to make sure he doesn’t get beat by the long ball.  As a young pitcher, there’s nothing worse than having an opposing player take you yard.  Look at his reaction after Adrian Gonzalez tags him for a home run:

Or how about this one by Mark Texieria?

So, to avoid getting beat, Drabek nibbles on the corners.  The problem with that strategy is that Drabek’s pitches have so much movement to them that they sail every which way out of the strike zone, resulting in balls.  These balls turn into walks and those walks snowball into a mess of lost confidence.  The lost confidence turns into frustration and anger and then the sky falls on Drabek’s head.  A vicious cycle, if you will. 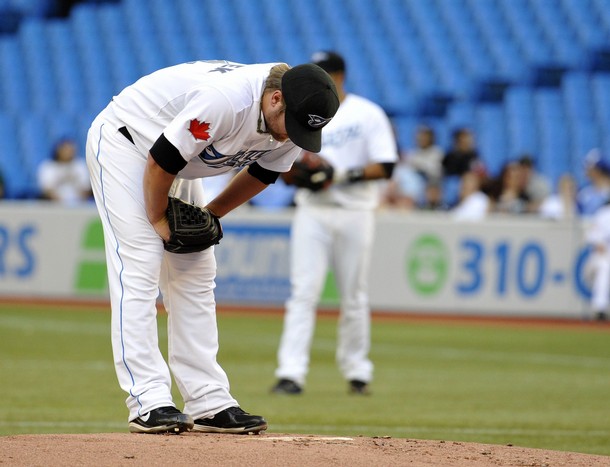 This is far from the first time a pitcher has gone through what Kyle is currently experiencing.  One player who went through the same struggle was Dustin McGowan.  He went from 8.2BB/9IP in 2006 to 3.2/9IP in 2007.  How?  By actually trusting his stuff.

“In the past, I had a tendency not to trust my stuff [or] trust myself. Now, I’m starting to trust a little more. When you trust your stuff, you can go right after guys. It’s all about having a positive mind-set.”

One of the players that McGowan went “right after” … was Yankees slugger Alex Rodriguez, who leads the Majors with 19 home runs. After McGowan commited a fielding error that allowed New York designated hitter Hideki Matsui to reach first base with one out in the sixth, the pitcher settled down and used five pitches to strike out Rodriguez. McGowan then forced Jorge Posada to ground into a fielder’s choice that ended the threat.

“He’s one of the best hitters in the game,” said Blue Jays manager John Gibbons, referring to Rodriguez. “All that showed is what [McGowan] is capable of doing. He’s got overpowering stuff. Now, it’s just a matter of it all coming together and believing in himself. The sky’s the limit.”

The sky is the limit for Drabek too.  Unfortunately,  the cure for Drabek takes time.  It’s called maturity.  And he’s most likely to find it pitching for AAA Las Vegas than he is in Toronto as he gets eaten alive start after start.  I few days ago I tweeted my own personal prescription for Drabek:

Of course, I was roasted by the Twitteratti, but I stand by it.  As the late Bobby Mattick used to say,  how can one have success without confidence?  How can you have confidence without success? (source)  Right now Drabek’s confidence is probably the lowest it has been in his entire baseball-playing career.

John Lott reported that the Jays are not likely to send Drabek down like they did with Cecil and Snider:

Earlier this season, when promising young Jays hits bumps in the road, the club dispatched them to Las Vegas to work out their woes. Drabek is not about to follow Brett Cecil and Travis Snider, Farrell said.

“We fully believe in him. He’s going to have some growing pains. We’re fully aware of that and fully accepting of it. He is a guy that we’re committed to.”

However, should Drabek continue to struggle, I don’t think it will be long before Drabek is on a flight to Vegas baby, Vegas!  Last week on the Jeff Blair Show, Blue Jays GM Alex Anthopoulos stated the organization’s philosophy when it comes to developing players in the minors:

We can force Kyle Drabek to work on his changeup in New Hampshire, even if he gave up a home run every time we can tell him it’s okay. We need you to work on it and make it a better pitch. We want them to work on the process so that we when they get up here they can worry about the results.

The environment at AAA Vegas is much more forgiving because the team success at that level is not nearly as important as it is in the Show. Eventually Drabek will reach that same breaking point that Dustin McGowan did and by struggling through the adversity he will find the maturity that will allow him to reach his full potential.  Current Diamondbacks pitcher Joe Saunders said it best:

“You have to say, ‘I hope this guy throws a strike and I’m going to kill it,’ or, ‘This guy’s going to hit it to me and I’m going to turn a sick double play,’ or, ‘I’m going to throw this ball right where I want to for strike three.’ If you don’t think like that, you won’t go far.”
— Joe Saunders

He needs to approach hitters with the mentality of “this is my best pitch.  If you hit it out, I’ll tip my cap to you.  But I’m going to go after the next guy and I’m going to get him.”

When asked how he’ll seek to remedy what is currently ailing him between starts, Drabek said, “Still working on the same things.”  It’s time to work on some different things.  Kyle desperately needs to work on the process of throwing strikes and his mental approach to the game.  Only then will the confidence, success & results come. 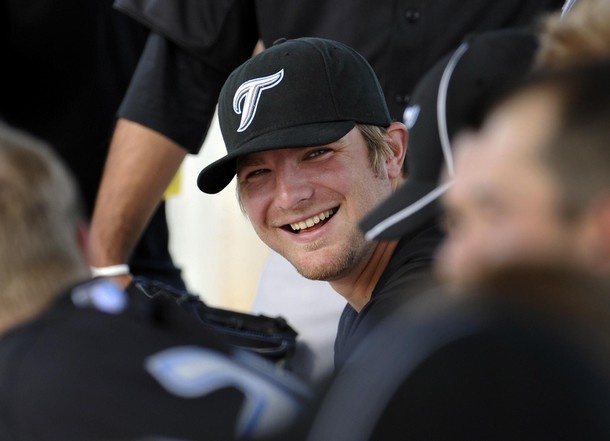 All images courtesy of REUTERS