Covered during an earlier Series Preview article, Moore has been awesome in the second half, posting a 1.97 ERA with 49 K vs 16 BB in 50 IP.

Moore faced off against the Jays back on August 9th. He went 6 IP, allowed only 2 hits, struck out 6 and walked two. He limited quality contact, allowing only 3 well-hit balls.

He was able to do this by working down in the zone with all three pitches (fastball, change, curve). 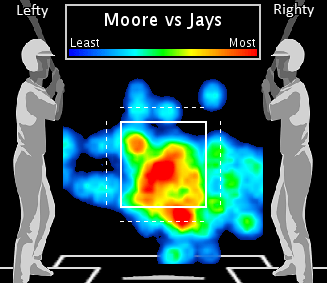 I’m probably over confident in Moore’s abilities; When he’s on, he’s similar to Clayton Kershaw. You take what you can get.

What makes Hellickson’s game work in the real world vs the world of sabermetrics is a very high infield fly rate. (7.7, 16.2, 10.4% rates in his three MLB seasons).

Jeremy is prone to the long ball, with a 11.9% HR/FB rate. He likes to work down and make hitters expand the zone. 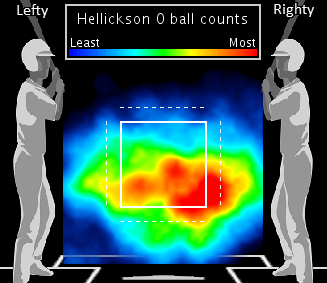 He owns one of the games best right-handed changes, and he throws it over 25% of the time.

The Jays can expect the ball down, regardless of pitch type.

Niemann is fresh off of the DL. This Tampa Tribune story from earlier in the week fills in the blanks, and also tells the story of Jeff barely escaping yet another injury:

Niemann, who left his last big-league start that way only to find out he had a fractured right fibula, was fortunate Saturday when the line drive that struck the side of his right hand resulted in nothing more than a small cut.

Niemann, who made four minor league rehab starts, hasn’t been stretched out to go more than four innings, so the Rays will need a rested bullpen on the day he makes his first start.

I think it’s safe to say that a pitcher coming back from such a lengthy layoff, including short minor league stints, will throw a higher percentage of fastballs and, in Niemann’s case, cutters. The Jays are aware of this and should be able to jump all over these pitches.

I get the feeling that David Price is under-rated. Perhaps it’s playing in Tampa. Perhaps it’s a case of year in, year out excellence. Regardless of the reasoning, he IS one baseball’s true aces; he can throw 220+ IP every season, can rack up huge strikeout totals and when on can be truly dominant.

Price has always had a power fastball. This season he’s refined his off-speed pitches, and has turned his curveball into one of the majors best pitches (in terms of outcome).

Price is a ‘real man’ when it comes to throwing his fastball, as he throws it primarily inside to righties. 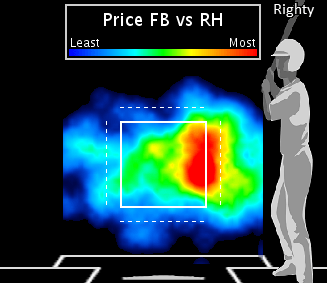 Similar to Matt Moore, when Price is on he’s a tough match-up. He’s coming off his seasons worst start, a 6 ER, 10 hit in 4 IP outing in Texas. May luck be on Toronto’s side…