The Toronto Blue Jays gave the Detroit Tigers are run for their money this past week, but in the end have nothing to show for it, dropping all three games.

On the plus side:

Bold Prediction: The Jays will win their first series of the month in Baltimore

Will the real Zach Britton please stand-up? The lefty has started six games this season. He was shelled in four of these starts; the other two starts included six & seven innings of shutout ball.

Britton, a former third round pick, has had an up and down professional career. In 2011 both Kevin Goldstein and John Sickels ranked Zach the Orioles #2 prospect, with both prospect writers attaching near superstar level grades to his upside (Goldstein 5 out of 5 stars, Sickels an A-)

Britton’s #1 pitch is a power sinker. He regularly posted GB percentages in the mid-60’s in the lower minors. While he’s backed off from that level as he’s advanced through the system, he did post a rate of 56% in AAA this season, 55% in a short MLB stint last season and 62% so far in his 2012 MLB campaign.

Zach throws his fastball around 67% of the time. His main off-speed offering is his slider, which has held opponents to a .494 OPS this season. Against RH he also throws a change.

In only six games, Britton has allowed three HR on first pitches. It’s easy to see why: 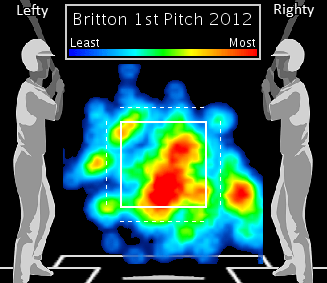 Jays Plan of Attack: I think Zach is like most sinkerballers. When he’s stuff is on, he’s very difficult to hit against. But if his sinker isn’t working, he’s very hittable. The Jays should remain aggressive on first pitch sinkers.

Acquired years ago in the George Sherrill trade, Johnson has quietly advanced through the Orioles system. He’s a flyball pitcher that gave up 24 HR in AA in 2010. His GB rate sits around 30%, and he walks between 3-4 per 9 IP.

From a pitch F/X standpoint, his fastball movement is almost exactly the same as Casey Janssen’s. He throws in the mid to low 90’s and mixes in a change and slider. But he lives and dies by his fastball, which is throw about 70% of the time.

Jays Plan of Attack: LH are hitting .161 off of Johnson. RH are hitting an even .400. Load up the batting order with righties and gear up for the heat.

In 2009, MILB.com ranked Tillman as the 16th best prospect in all of baseball. Similar to Britton, Tillman has had an up and down proffesional career. There are signs that he’s putting things together, as he had a very good stint in AAA in 2012; he’s also been servicable in the MLB, producing 0.6 WAR and a 4.11 FIP in nine starts.

He works away to both types of batters and does not fall into any obvious pitch selection patterns: 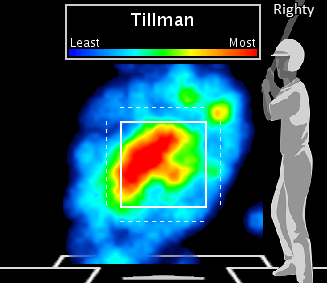 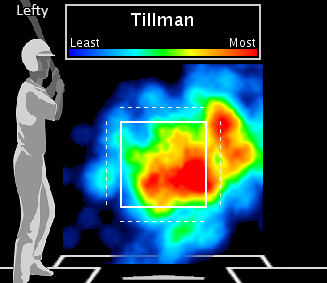 In 2012, Tillman has a drastic outcome differential on his fastball vs off-speed pitches. Opponents rates on pitch types (standard small sample issues apply):

Jays Plan of Attack: Avoid the curve! All kidding aside, the numbers indicate attacking fastballs and laying off off-speed pitches.