The 53-55 Toronto Blue Jays head into St. Petes to for a three game series against the 56-52 Tampa Rays.

The Rays own one of the majors most anaemic offenses, scoring just 4.01 runs per game. Carlos Pena leads the team in both HR (15) and RBI (46). It’s possible that the Rays could finish the season without even one 70 RBI batter! But there is hope for Rays fans–Evan Longoria has returned after missing over four months with a partially torn hamstring. He’s expected to hit third in the Rays lineup. 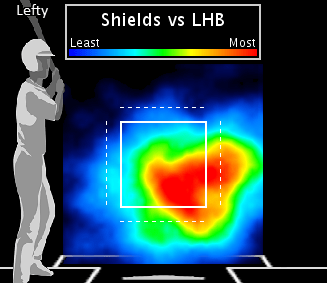 Opponents load-up lefties vs Shields, and with good reason. They have a reasonable .783 OPS. Lefties have also hit 14 of the 17 HR Shields has allowed this season.

Shields, the change-up specialist, also mixes in his slider with 2 strikes against LHB. Between the slider and change, LH Jays hitters can expect slider/changes over 75% of the time in 2 strike counts. 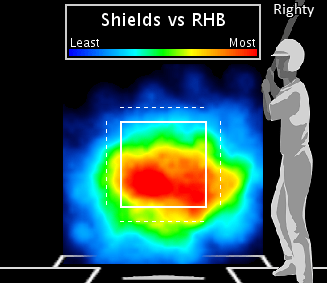 Staying low in the zone, Shields has found a degree of success vs RHB this season. He keeps the ball in the park, and relies on his change with two strikes.

Plan of Attack: Shields BABIP against is back up to career norms this season (2012 BAIBP of .335). It’s been no secret that Shields likes to keep the ball down, as well as going to his change-up in strikeout counts. Jays hitters should remain patient, and focus on the lower portions of the strike zone.

Look at select BABIP against numbers!:

Plan of Attack: With high BABIP numbers over two seasons, Jays hitters know which pitches to attack and which pitches to lay off of. This game in particular should be an interesting gauge for how the youngsters can (or cannot) implement a game plan.

After a poor start to the 2012 season, Moore has been on fire of late, and is back to looking like the pitcher that arrived late in the 2011 MLB season.

Matt is not your classic southpaw. He doesn’t attempt to pitch to the corners, disrupt timing or make hitters chase. After early control struggles, he’s now interesting in pitching to the zone and letting hitters beat him.

Recently, Moore has come out on top. Below is a batting average against chart for pitches in the strikezone over the past month. While most pitchers get killed in the zone, Moore has been able to not only survive, but thrive in the upper portions: 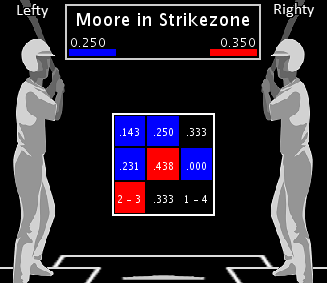 To push the point across, here’s another heat map, this time highlighting Moore’s pitch locations vs RHB over the past month: 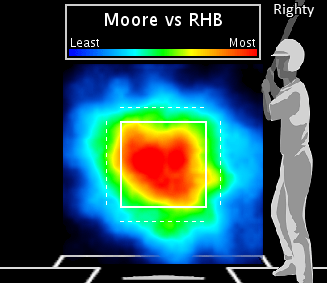 Umps holding him back

For all of the talk regarding Rays catchers framing ability, Matt Moore has been getting squeezed by the umps over the past month.

Example: If Moore is in 7th percentile, that means 93 out of 100 pitchers receive more out-of-strike-zone calls on a percentage basis

This creates a really scary picture for the Jays. Matt Moore is getting screwed by the umps, and it doesn’t matter. Check this stat out:

If the umps start calling the strike zone, and Moore continues to generate swing and misses on in the zone pitches— Moore will become the pitcher everyone expected, a borderline ace.

Plan of Attack: It’s going to be an uphill battle. The Jays would be wise to let Moore and the umpire establish the strikezone. If possible, load up on walks and tick up Moore’s pitch count. If he’s getting strike calls and in turn getting ahead, the Jays should switch into the ‘aggression mode’ trait that they exhibited in the Oakland series.