The Toronto Blue Jays continue their ten game homestand by hosting the Chicago White Sox for a four game series.

The current Blue Jays team is funny, and at times painful to watch. They get shutdown by fringe starters Freddy Garcia and Ivan Nova this past weekend, and instead beat up on a decent arm in Phil Hughes. The Rajai Davis show on Sunday helped the Jays avoid a sweep. They enter the White Sox series six games under .500.

The visiting White Sox own the American League’s third best record. They’ve been able to do this with a mixture of timely hitting and a rotation that has exceeded all expectations. Really, did anyone predict the statistical outputs that Peavy, Sale and Quintana would bring to the table in 2012?

Opposing pitchers and mini-scouting reports for the series:

Peavy gets and stays ahead in counts, as he is the owner of an above average 65.9% strike percentage.

Peavy has kept hitters guessing throughout the season, as he throws a multitude of pitches. Here is a table of pitches used this season vs LHB:


As the table shows, LHB can expect everything but the kitchen sink throughout AB. With two strikes Peavy turns to his curveball.

Against RHB Peavy is a little more predictable, as he relies mostly upon a cutter and slider combination.

Jays Plan of Attack: Peavy should be a tough match-up for the current Jays roster. They’ve been having a hard time with control pitchers. My recommendation would be to look for cutters away, and attempt to hit with power to the opposite field. If the youngsters attempt to pull these pitches they will get into trouble.

Signed as a minor league free agent in the off-season, Quintana is a power lefty that has come out of nowhere to quietly become a successful MLB starter: He did not make Kevin Goldstein’s pre-season list of White Sox prospects; Sickels ranked him 20th in a very thin farm system.

Ending last season in high-A in the Yankees organization, Quintana started 2012 in AA for Chicago. After just nine starts he was called to the bigs, a level he’s stayed at ever-since.

So far, Quintana is a rare lefty that posts reverse splits, meaning that LHB have better statistics against him than RHB.

He throws a 4-seamer, cutter, curve and slider to all batters. In addition, he throws a change to righties.

Quintana is a very gutsy pitcher. His pitch location, mostly middle in, to RHB this season: 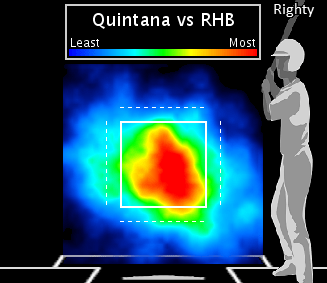 A quote from Jose, regarding his approach in a start vs the Dodgers earlier this season:

“I knew they were a good hitting team, so I was focusing on trying to be in the inside to middle of the plate,” said Quintana through a translator. “So, one of my biggest concentrations was giving them the cutter. I was trying to throw that cutter, especially deep in the count.”

Jays Plan of Attack: I have a soft spot for lefties that pitch inside. I wish Quintana well; after this start in Toronto. Jose is going to challenge Toronto hitters. Will they be up to the task? Grip and rip should be the gameplan.

Floyd has struggled mightily with his control in the second half of the season, walking 17 vs 13 BB in just four starts.

Gavin throws a fastball, change (to both LHB & RHB), a curve and a slider. He has a high reliance upon a fastball/slider combination when facing RHB.

One area of note: The Jays really have to watch location with two strikes; Floyd is all over the place. 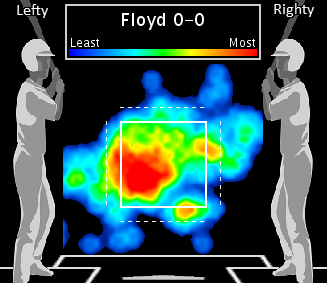 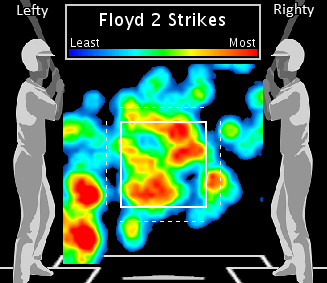 Jays Plan of Attack: Floyd is struggling with his command. Don’t help him out. Be patient, and determine if he can find the strike zone. Chip away, extend the pitch count and look for hittable pitches up in the zone.

Acquired via trade a few weeks back, Liriano has made three starts for the White Sox.

He throws only two pitches against LHB, his fastball and a wipeout slider.

Against RHB he adds what is arguably his best pitch, a sinking change.

Liriano mixes his pitches on 0-0 counts and stays away from obvious patterns.

A high percentage of his pitches are down in the zone, regardless of batter type: 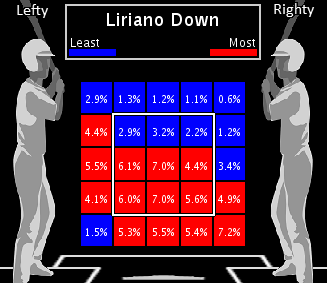 Jays Plan of Attack: Look down in the zone. Liriano is the type of pitcher that can dominate when his stuff is on, and is very hittable when he lacks control or his A-Game.