Over the past week I’ve created series previews for Toronto’s upcoming opponents. The previews focus primarily on the opposing pitcher, what that pitcher aims to do, and how the Jays should game plan their offence.

The following is a report card of sorts. The format is as follows:

Jays Plan of Attack: RHB are hitting  only .455 OPS & .165 wOBA vs Vargas’ change. The prevailing logic would be to lay off the pitch and attack his fastball & cutter. Sometimes this is easier said than done.

Vargas’ cutter & fastball did their damage as well, as the Jays weren’t able to muster solid contact against these pitches.

It was just one of those games. Vargas had his mojo working and Toronto couldn’t do anything against him.
Vargas: 7 IP, 5 hits, 1 BB. 4 K, 2 ER

Jays Plan of Attack: LHB should take pitches early to gauge how the umpire is going to call the game. RHB should jump all over fastballs. Beaven has allowed .384 wOBA & .910 OPS against on his fastball this season.

Instead of letting the umpire control the game, Jays hitters were aggressive all night long, swinging at multiple first pitches. The LHB made up the majority of the offence, going yard twice:

Luck was not with the bluebirds on this afternoon, as only one of three linedrives landed in for a hit (Cooper’s double in the 5th).  Toronto’s BABIP on fastballs for the gam was only .167
This translated into Beaven picking up the W
Beaven: 7.2 IP, 7 hits, 0 BB, 4 K, 3 ER

At the start of the series I called for the Jays to open it up on the base paths. This game would have been a great time to do so. Colon allowed 7 hits on the night, all singles. Inexplicably the Jays did not attempt even one steal in game one.

As for attacking early & often, Toronto came through with flying colours:

This payed off in terms of the seven hits . However, the station to station nature didn’t get the job done and Toronto failed to score a run against Bartolo.

Game #2: Invalid, as the A’s made a late change, calling up rookie Dan Straily to take Travis Blackley’s place.

Game #3: Invalid, as A’s starter A.J. Griffin injured himself in the 2nd inning.

Jays Plan of Attack: Stick with the game plan from last week. Remain aggressive, attack Milone’s low offering and look to drive the ball to the outfield.

Toronto followed this game plan to the letter. Here’s a graphic of the Jays hit locations: 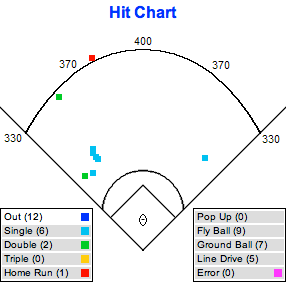 Toronto RHB neutralized the outside corner and all batters fared well on lower offerings. In total, Toronto was 6 for 13 against bottom third and lower out of the zone pitches: 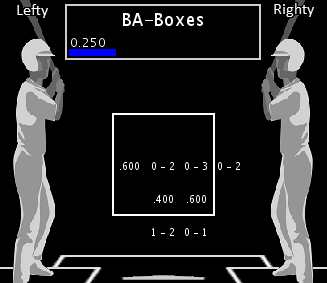 Surprisingly, these little ‘plan of attack’ appear to be similar to the game plans that the Jays employ.

I can’t make any promises regarding future post series-recaps, as there are a number of Jays related topics I’d like to spend my time on. However, I will continue creating series previews for at least the rest of the month, if not the entire season.