How did my prediction for last night hold up? (For those that missed it the gist is this: When Purcey can’t control his fastball he ups his percentage of sliders thrown. When at the park or watching on TV if you’re seeing a large number of sliders assume that his command of the fastball jut isn’t there.)

Let’s check out his pitch by pitch speed chart 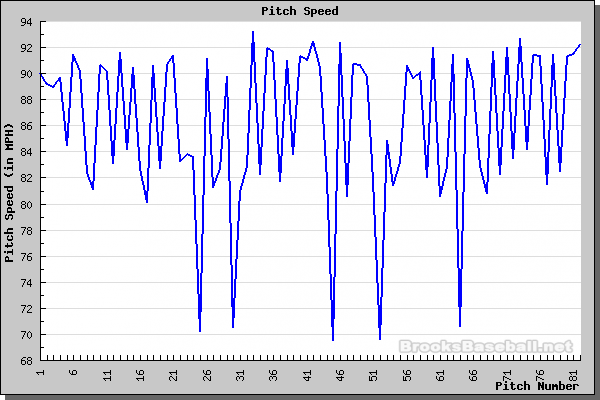 From this it appears that Purcey went out and attempted to at least somewhat establish his fastball over the first twenty pitches. After that he started to work in a few curves, change-ups and a higher degree of slides.

From this I think it’s clear that Purcey once again had fastball location problems. I know that its early in the season and David was handed the #2 rotation spot out of camp. However, very few starters can get by at the MLB level with only two pitches, and fewer still that have trouble commanding the fastball.

The Jays brass should extend Purcey a few extra starts. But if he can’t command his fastball by that point its time to send him down to AAA to work things out.