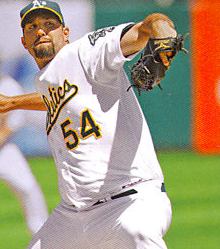 Brown is an ex-team USA member and has played portions of the past three seasons in the major leagues. Last season in limited action due to an appendectomy and shoulder soreness, Brown posted a 3.09 ERA in 35 IP.

While Brown has battled control issues throughout his career (46 BB in 86 MLB IP) he does come with above average stuff. He’s only allowed 67 hits and 4 HR during his 86 IP.

As you can see Brown’s average (named Initial Speed) fastball is close to 96 MPH with some considerable rise. He also posses a hard 87 MPH slider, although I’d like to see some more tilt from that pitch.

All things considered a team should be able to sign Brown for a low cost. If a pitching coach can harness his control than Brown could be a contributor to a team’s back end of the pen as early as the 2009 season.

While the Jays have a boat load of relievers, I still think pursuing Brown would be a wise move. He could initially fill in the 6th or 7th, with room to possible progress to some later inning work. If he does pan out the Jays could then trade an established reliever to fill in hole somewhere else on the ballclub.