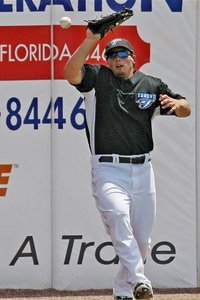 It was back in 2006. One of the first ever articles on Mopupduty.com was a prospect bio on Travis Snider. In the comments section myself and others were going back and forth on Snider’s defensive ceiling. I said the following

I think he has no chance in playing RF in the majors. I’m surprised that they let him play there now. I guess at 18 he?can develop some defensive skills but it’s a good thing he was drafted by an AL team.

This didn’t sit too well with Travis Snider’s dad, Denne Snider. He came in and left the following:

I do not know where your resources come from but this kid has a good arm and plays defense extremely well. Mark my words you do not know what you are talking about. Lets just see. He is also a very good first baseman, but what do I know, I am his dad.
DENNE SNIDER

(On a side note, props to a father taking the time to sort out the blogsphere taking trash about their kids)

Is Travis totally to blame? I don’t think so. He’s started at DH 74 times in his minor league career. About 50 of these DH starts were due to an elbow injury. The other 24? Beats me. Why take valuable reps from a youngster?

As much as it pains me (to watch at least), Cito should continue to pencil Travis into LF or RF for the rest of the season. I’m keeping my fingers crossed that he’ll improve. Otherwise it’s conceivable that the 2010 Jays could have five regulars that should be DHing (Snider, Lind, Wells, Ruiz, Encarnacion)