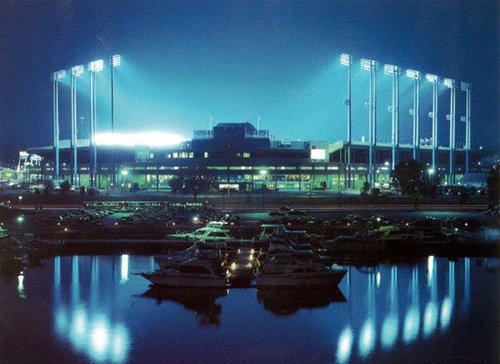 Just a quick word today on Exhibition Stadium – Former home of the Toronto Blue Jays.  I write this because Clem’s Baseball, the best private ballpark site I have ever seen, updated his Exhibition Stadium page.  Everyone who is interested in ballparks, past and present, should check this site out and its amazing dynamic diagrams.

This is a park that most people, especially Americans, have little or no recollection about.  Mr. Clem touches all the bases with his overall assessment and grading of Exhibition Stadium.

The reason for the change in capacity was due to the CFL’s Toronto Argonauts’ front office ripping out the upper seats on the first base side, and replacing them with backless aluminum bleachers.  This happened between the 1977-1978 season. 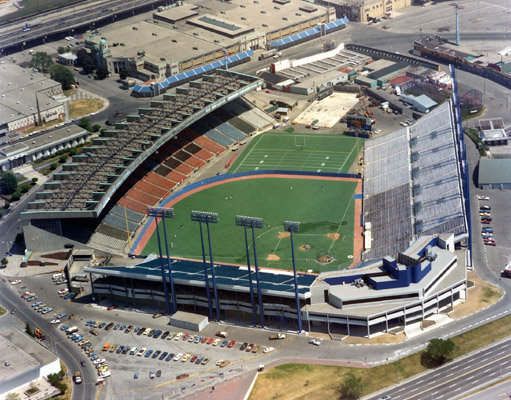 The baseball grandstand was built hoping to draw the San Francisco Giants here.  The Giants almost moved to Toronto for the 1976 season.

There were private boxes and a football press box on top of the covered outfield grandstand.  The park was located west of downtown in the Canadian National Exhibition Grounds.  A ticket to the Jays would get one into the Ex when it was held at the end of August, usually resulting in overflow crowds.

The bullpens were in foul territory.  The home-team Blue Jays were in left-field,  the visitors in right-field.

There was a movable stage in deep centre-field that would be rolled in front of the football grandstand for big concerts and rolled out for sports.

The location by Lake Ontario was nice in the summer. However, April and May could bring fog, wind, driving rain and – just like on opening day – snow.  During the summer, seagulls were more than plentiful and would often cover the field in the hundreds during games.  Dave Winfield became infamous for killing a seagull with a ball in the 1980s.  All was forgiving following his heroics in the 1992 season.

The park was dry for several seasons. Beer was first sold in the early 1980s.

The Jays threatened to move back here for the 1999 season when they could not come to an agreement with the SkyDome people.  The stadium was being prepared for demolition at this time but nothing became of the threat.

Any other recollections of this park out there?