Even before his 23 strikeout performance, San Diego State’s RHP Stephen Strasburg was the consensus pick to go #1 in the 2009 MLB draft. Consider this: as of March 22nd, Strasburg is 4-0 with a 1.57 ERA in five starts, and has racked up 74 strikeouts in 34 1/3 innings – more than 55 percent of the batters he’s faced. He’s walked just seven batters and has yielded just 21 hits.  His K:BB ratio is 74:7. Incredible. 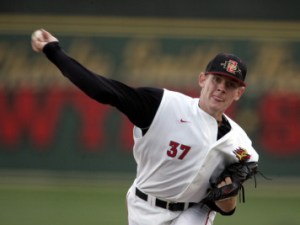 So who is this guy and if he is so good why wasn’t he drafted out of high school?  Currently Strasburg is listed at 6’4″ and 220 lbs.  In high school, he was slightly shorter and about 50-60 lbs. heavier. His fastball barely touched 90 mph.  San Diego pitching coach Rusty Filter saw something in him and insisted on having him in camp.  In his freshman season, Filter but Strasburg on a conditioning regimen that included hot yoga and as a result, Strasburg shed 30 lbs.  Not only that, his velocity began to creep up.  By the time he was a sophomore, his fastball was consistently clocked at 97-99 mph with occasional touches of 100 and 101.  Strasburg also possesses a plus-plus-plus slider at 81-84mph.  He has a plus change that he uses infrequently and a plus curve in the 70s. 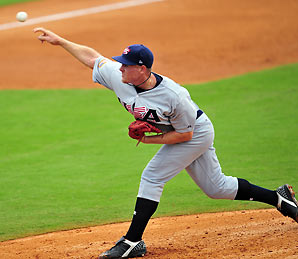 On April 11 against the University of Utah, Strasburg took the mound and walked off it nine innings later having set San Diego State and Mountain West Conference records with 23 strikeouts. 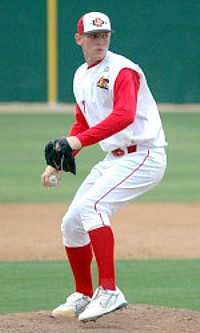 It is estimated that a pick of Strasburg will cost a team between $10-$12 million dollars.  Considering that Washington has the first pick, it will be interesting to see what they do after messing up their negotiations with Aaron Crow last year for monetary reasons. Would they do it twice in a row? Not likely, yet the franchise is in shambles and is the laughingstock of MLB.  It is an interesting scenario however, since the pitching thin Washington Nationals may welcome Strasburg to their starting rotation as early as the latter part of 2009.

…and this just in from the Globe & Mail’s Jeff Blair:

Sports agent Scott Boras has let people know that client Stephen Strasburg, the San Diego State University pitcher who is considered the consensus top pick in the June baseball draft, will ask for a six-year contract worth upward of $45-million (U.S.). If he doesn’t get it, he will pitch in Japan. 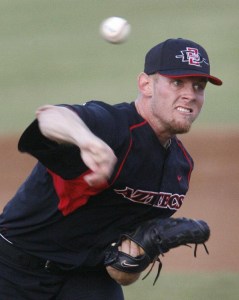 Here is a clip of Strasburg pitching on March 5th, 2009. Notice the pace at which he works and the sick wicked and nasty breaking pitch at 0:30.

And, of course, his 23 strikeout game.