When the Toronto Blue Jays first acquired Marco Estrada from the Milwaukee Brewers via trade, he brought to (my) mind another former Brewers pitcher acquired by the Blue Jays: Carlos Villanueva.

The similarities lie in their arsenal of pitches and their approach to attacking hitters.  In 2016, Marco Estrada’s average fastball velocity of 88.1 mph ranked 66th among 73 qualified MLB pitchers.* During Carlos Villanueva’s two seasons in Toronto in 2011 and 2012, his average fastball velocity was a tick higher at 88.9 mph.  So they’re not exactly fire-ballers. In addition, both pitchers carve up the strike zone, and both pitchers rely (or relied in Villanueva’s case – he is no longer active in baseball) heavily on their off-speed offerings to be successful.  Like Estrada, Carlos Villanueva arrived in Toronto as a reliever, transitioned to the starting rotation, and then punched above his weight. And here is where the similarities end.

Marco should change his name to Estrella because he's a star. A god damned shooting star. ?

The reason the Blue Jays were able to acquire both Estrada and Villanueva is because their fastball velocities are so low in comparison to their peers.  The harder a pitcher throws, the sexier they are in the eyes of both baseball fans and MLB GMs.  Fans around baseball gasp in awe when relievers can touch triple-digit readings on stadium radar guns.  It’s not sexy to get opposing players out by disrupting their timing, changing speeds, and generally being deceptive. Villanueva and Estrada were not viewed as sexy acquisitions by the Blue Jays, in fact, they could best be described as under the radar.

Since being traded to Toronto, Estrada has been kicking ass. Estrada’s effectiveness lies, like most pitchers, in the pitch he uses to get hitters out (his “out pitch”).  Marco’s weapon of choice is a change-up with an average velocity of approximately 77 mph – a full 11 mph slower than his fastball.  In fact, in 2015, Estrada led all pitchers in velocity differential between his fastball and change-up.

That type of speed differential makes it exceedingly difficult for hitters to adjust, especially if the pitcher can throw the change-up from the same release-point as the fastball, and with the same arm-action.  Below is a chart of every fastball (in black) and change-up (in blue) that Marco Estrada threw in 2016: 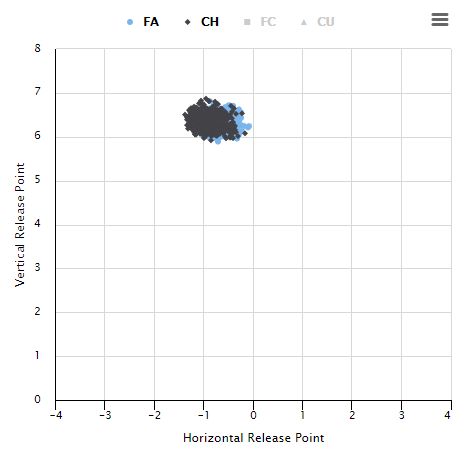 When hitters try to adjust to Estrada’s 11 mph velocity differential, it causes them to “roll over” the pitch, resulting in weak ground balls or a swinging strikes.  Not only that, but the vertical movement on Estrada’s fastball and change-up both lead baseball. Since 2015, Marco Estrada’s .207 batting-average-against ranks behind only Clayton Kershaw, Jake Arrieta, and Max Scherzer. He is ahead of the likes of Justin Verlander, Madison Bumgarner, Chris Sale, Stephen Strasburg, and Corey Kluber.  These are the names of elite MLB pitchers and Marco Estrada belongs among them.

Speaking of elite MLB pitchers, Estrada learned from one of the best: five-time All-Star Mark Buehrle. While pitching with a herniated disc in 2016, Estrada’s fastball, normally in the 88-89 mph range, was topping out at 82-83.  He was still effective, however, thanks in part to the confidence he gained from watching his 2015 Blue Jays teammate Mark Buehrle:

“Watching him pitch, he’s that guy throwing 80-83, 84, whatever it was and you see how quick his outs are, how well he locates and he just seems to get everybody out,” marvelled Estrada about the pitcher whose contract expired following the 2015 season. “And that makes you realize it’s not always about speed.

“You locate a pitch and you can be really successful in this game. And that’s basically what he taught me.”

“I think I was throwing 82 miles an hour (on my fastball) because I couldn’t really reach out and finish a pitch,” said Estrada, who dealt with back pain most of last season. “I did OK … (and) that’s when I kind of told myself, ‘If you’re healthy and you’re throwing 82, 83, you can probably still do it.’ It’s all about location and deception of the pitch, that differential between the fastball and change-up. That’s what I’m more worried about.

Estrada’s detractors will point to his FIP: Fielding Independent Pitching.  It’s a statistic that measures what a pitcher’s performance would look like if they had a league-average defense playing behind them.  Basically, it’s a statistic that tries to take a pitcher’s luck out of the equation.  FIP has generally been quite unkind to Estrada.  In 2015, according to FIP, Estrada’s ERA should have been a full 1.27 runs higher than it actually was.  This was due to his uncommonly low .216 BABIP.  Those same detractors will look at that aberrative BABIP (league average is generally in the .280-.300 range) and deduce that Estrada was “lucky” or “fluky” and that his performance will eventually regress to the mean, the way Cinderella was supposed to turn into a pumpkin after midnight. However, uncommonly low BABIPs generally accompany pitchers that induce soft contact.  And that’s exactly what Marco Estrada does.  As the saying goes, “you’ve got to be good to be lucky, and lucky to be good.” I’m inclined to evaluate Marco’s performance based on what actually happens on the field, not what should have happened if he had a mythical league-average defense playing behind him, or if the baseball gods arbitrarily awarded hits on balls-in-play at a .280-.300 clip. 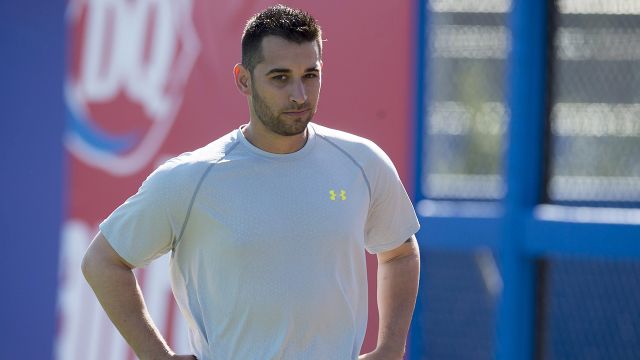 It’s generally accepted among sabermetricians that the value of a single unit of WAR is roughly $8 million.  This number is calculated based on what MLB teams are currently paying players in salary for wins.  In the off-season prior to the 2015 season, the Blue Jays traded for Marco Estrada and paid him a salary of $3.9 million. That year his calculated value was 3.9 bWAR – in other words, his performance was worth approximately $31 million. This is what Blue Jays’ President Mark Shapiro would refer to as a “value play.”  So then, how might the Blue Jays catch lightning in a bottle again? Since the Blue Jays’s starting pitching depth could best be described as a dumpster fire, who might be some buy-low, un-sexy (no offense to Estrada the person), high velocity-differential pitchers?  Is there a market inefficiency on Marco Estrada-type pitchers that the Blue Jays could capitalize on?  Could there be the potential for similar under the radar-type acquisitions? I did some investigating and came up with a few candidates:

Drew Smyly is a left-handed pitcher currently in the Seattle Mariners organization.  He spent most of his career as an effective reliever before the Tampa Bay Rays transitioned him to the starting rotation.  He had a sub-par 2016 campaign, though his peripherals were fairly solid.  In 2016 he maintained a 10.4 mph average velocity differential, and as you can see from his game chart, had similar release points for both his fastball and change-up: 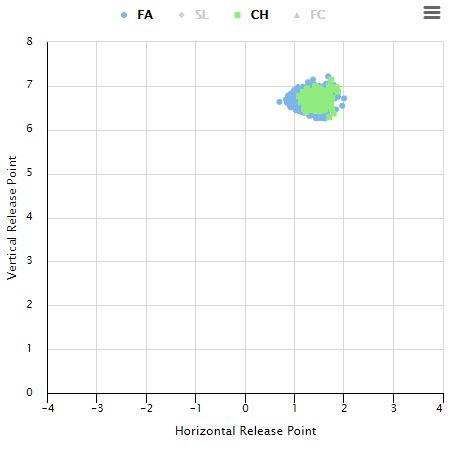 Currently Smyly is on the 60-day disabled list with a strained flexor tendon in his pitching elbow.  If he comes back from the injury and his velocity takes a dip, he would be a prime candidate to follow the Mark Buehrle pitching-model in order to be successful with diminished velocity.  He would also be a prime buy-low candidate coming off a lengthy injury and lacklustre 2016 campaign.

This season, Oakland Athletics’ right-hander Jharel Cotton is pitching with an average velocity differential of 15.4 mph!  He’s young, he’s built like Estrada, and could likely be part of any number of trades should the Toronto front office decide to re-tool this season’s under-performing roster.  The main issue with Cotton is that he hasn’t been able to command his pitches effectively; he’s walking an average of 4.1 batters per 9 innings pitched.  With that said, he’s still a young player at 25 years of age with room to develop. Though it’s not likely that a player with this type of upside will be developing in Toronto any time soon, that is, unless the team decides to tear down and rebuild.

Like Jharel Cotton before him, Jon Gray is a 25-year old pitcher with command issues while pitching in the decidedly un-friendly confines of Coors Field.   While Gray’s fastball isn’t very Estrada-like at an average velocity of 95 mph, his 9.6 mph velocity differential is quite similar.  Gray’s red flag is his lack of command, having walked 5.1 per 9/IP so far in 2017, abeit in a small sample size. Perhaps with a change of scenery – in addition to the tutelage of Blue Jays’ pitching coach Pete Walker – and Gray could reach his full potential. Gray’s release point is consistent between his fastball and change, which helps him rack up strikeout numbers in a ballpark where breaking balls fall flat.  With that said, Gray has a full arsenal of pitches and doesn’t rely on his change-up order to be effective.  He’s currently on the DL with a toe injury. Perhaps an opportunity for a bargain-hunting Blue Jays GM, but the first-place Rockies aren’t likely to give up one of their top young pitchers.

And that… is pretty much it.

Apart from these three candidates, it’s slim pickings.  There just aren’t many pitchers with the same skill-set as Marco Estrada in a baseball landscape that worships at the altar of velocity. The few candidates that do exist are being well-compensated for their effectiveness and reliability (Jeremy Hellickson, Julio Teheran, Johnny Cueto, Dallas Keuchel, Rick Porcello).  There’s no market inefficiency to exploit here – a pitcher that can prevent runs, regardless of how fast his fastball is, will be snapped up by MLB teams. Targeting the next Marco Estrada at the MLB level is not likely to bear fruit.  Instead, a pitcher with Estrada’s velocity differential bona fides might be found in the later rounds of the amateur draft.  In the meantime, Blue Jays fans should appreciate how rare and unique a talent Marco Estrada really is, and credit former GM Alex Anthopoulos for the shrewd acquisition.

*It’s worth noting that in 2017, Estrada – presumably fully healed from a wonky back that plagued him in 2016 – is throwing his fastball at 89.6 mph, on average.