Cast aside the .207 average. I also don’t care if his career year might have been back in 2007. Sucking in the three hole? Well, it happens. But the #1 thing that really pisses me off about Alex Rios is the number of times that he’ll ground into double plays!

In the off-season I wrote an article on the fastest MLB players that also ground into far too many double plays. Alex Rios was on the top of that list. In 2008 he stole 32 bags. This shows some speed. Jays fans also witness Rios’ running speed in the outfield every game. But somehow he grounded into 20 double plays last season.

Alex for the love of god start striking out with runners on. It’ll do less damage. 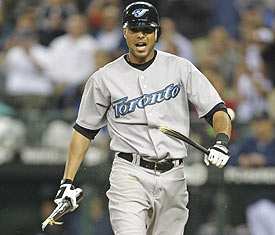 Look on the bright side, at least you didn’t GIDP